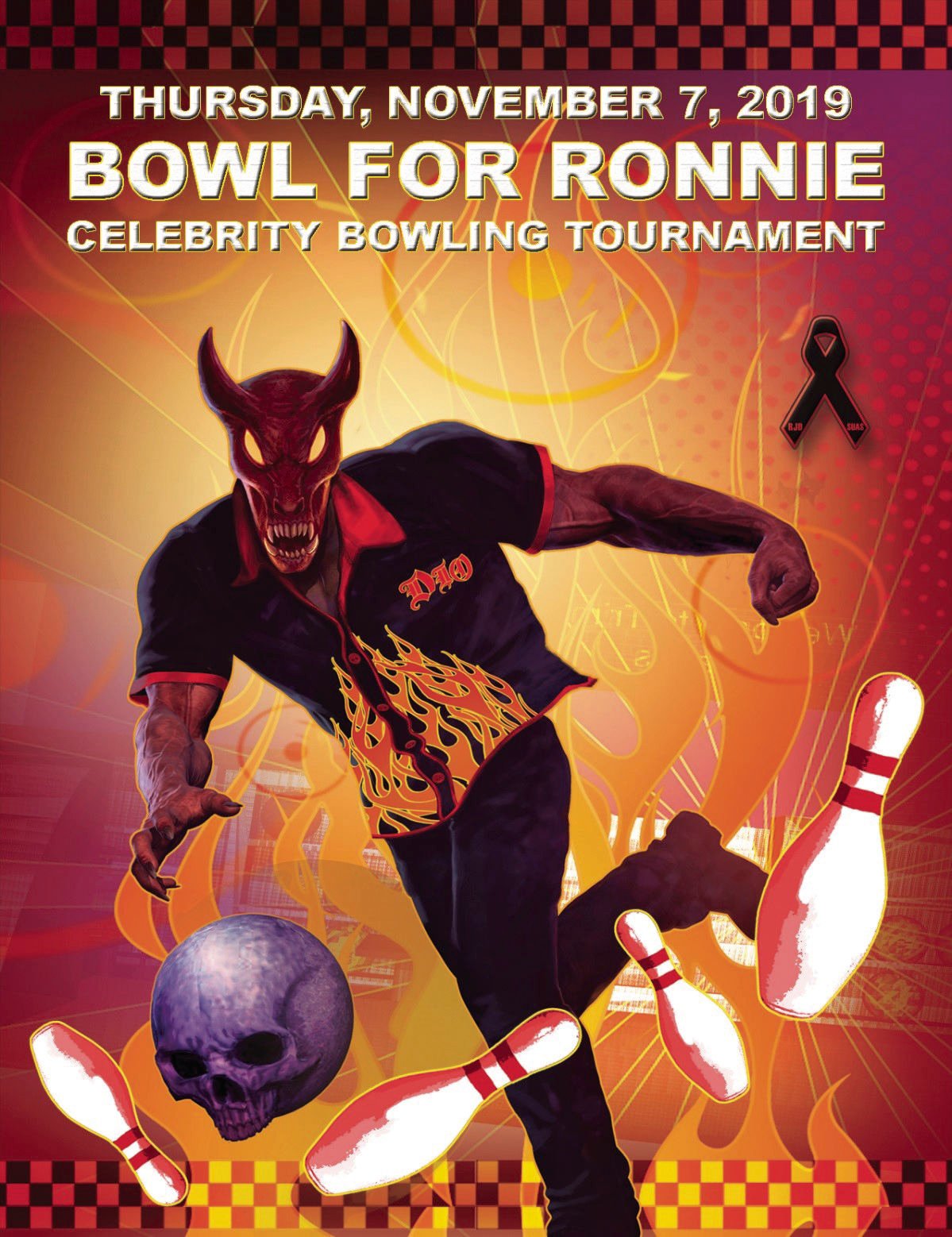 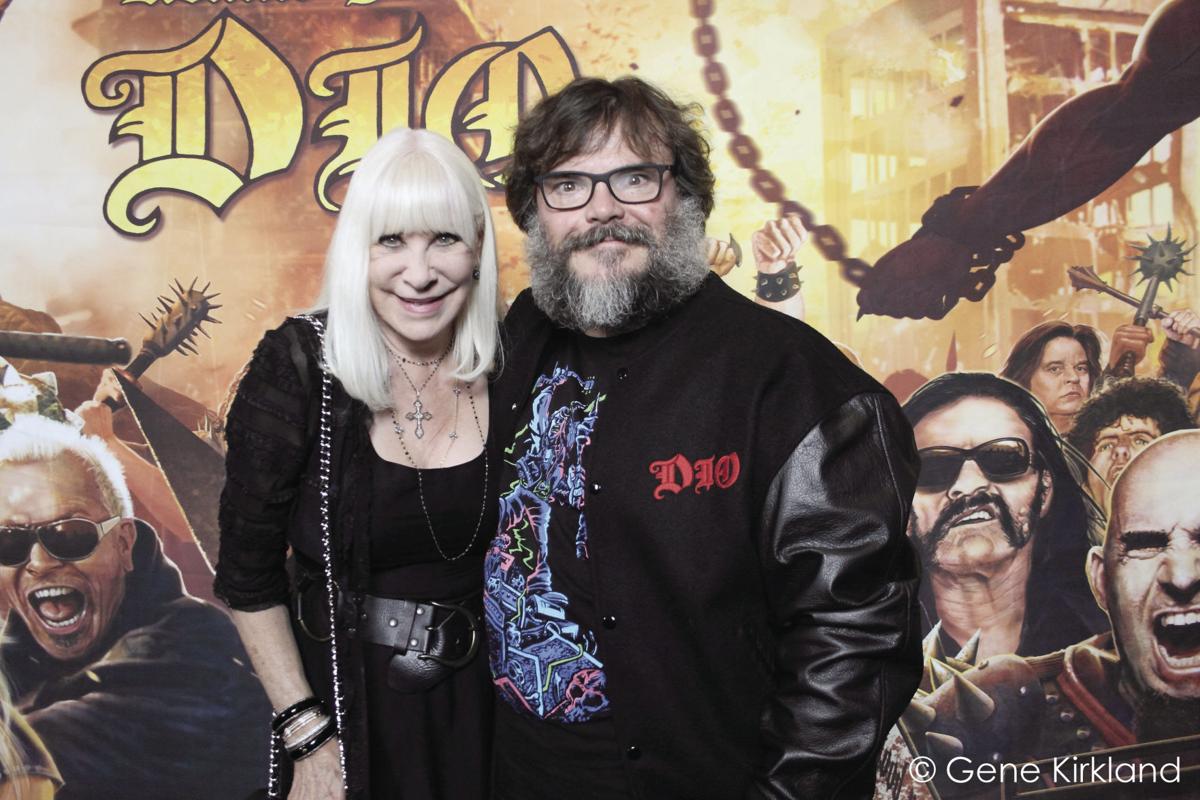 Wendy Dio and Jack Black are pictured in a promotional shot for the “Bowl for Ronnie” celebrity bowling tournament, benefiting the Ronnie James Dio Stand up and Shout Cancer Fund to support research and education that furthers early detection, prevention and treatment of prostate, colon and stomach cancers.

Wendy Dio and Jack Black are pictured in a promotional shot for the “Bowl for Ronnie” celebrity bowling tournament, benefiting the Ronnie James Dio Stand up and Shout Cancer Fund to support research and education that furthers early detection, prevention and treatment of prostate, colon and stomach cancers.

Rock stars, celebrities and fans of Metal legend Ronnie James Dio are converging for one night only, Nov. 7 at Pinz Bowling Center in Studio City.

“Bowl for Ronnie,” is a fundraising bowling tournament curated by the Ronnie James Dio Stand up and Shout Cancer Fund to support research and education that furthers early detection, prevention and treatment of prostate, colon and stomach cancers.

The annual event, now in its fifth year, was founded in the spirit of Dio’s ideals, as 100% of the proceeds go to the Cancer Fund.

Dio, who’s career spanned decades, never let the influence of his success get out of control, as he was forever passionate about giving back, namely to the underdogs of society. Dio’s extensive philanthropic endeavors included the 1979 establishment of Children of the Night, a privately funded nonprofit organization with the specific purpose to provide intervention in the lives of children who are sexually exploited and vulnerable to, or involved in, prostitution and pornography.

Dio died in 2010 from stomach cancer.

This year’s Bowl for Ronnie, features returning host Eddie Trunk, who is a television and radio personality and friend of Dio.

Also joining the all-inclusive event, having already purchased bowling lanes, are 14 volunteering Board members from the Stand up and Shout Cancer Fund, including President/Co-Founder of the fund and Dio’s wife, Wendy Dio.

She spoke with the Antelope Valley Press via telephone and commented on the enduring support of the event from people, worldwide.

“Ronnie was a very special person,” Wendy Dio said. “He loved his fans. They continue to support him in overwhelming ways. He still has 2.5 million followers on Facebook ... he was a very great, gracious human being and musicians speak highly of him.”

The event is special because it’s closely associated with Ronnie James Dio’s audience.

The Ronnie James Dio Stand Up and Shout Cancer Fund was founded in 2010, thanks to a start-up from fans and has raised in excess of $2 million, to date, through its various annual events and direct support from the vast community of Dio fans, worldwide.

The Fund also works in close conjunction with Dr. David T.W. Wong, director of the Dental Research Institute at the University of California-Los Angeles, and his dedicated team of researchers who are developing a simple, non-invasive saliva swab test for the early detection of specific cancers — a concept that is tailor-made for the Dio Cancer Fund’s mission and mantra: “Early detection saves lives.”

Participants are encouraged to gather friends, family and co-workers for the ultimate bowling team competition, which includes food and a raffle drawing for prizes and memorabilia.

Bowling lanes open from 6:30-11:30 p.m., with a simultaneously occurring VIP pre-party until 9:30 p.m., hosted once again by DJ Will, a Los Angeles-based Hard Rock and Heavy Metal aficionado.

An event with this many celebrities may seem hard to pull off, but the memory of Ronnie James Dio ensures an evening of fun for everyone. Marketing for the laid-back but serious event began three months prior to the tourney date and attracts anyone who supports funding and research for cancer treatments, as well as fans of Ronnie James Dio and bowling.

Being that he was so widely known and well respected, additional celebrities not listed at the party are sure to drop by.

As an individual spectator, the ticket price is $50 per person (includes pizza and general admission), an individual bowler ticket costs $75 and the buyer gets to join other “rock ’n bowlers” for open bowling from 6:30-9 p.m. on a first come, first served basis.

And if a group is interested in participating, a team/corporate lane sponsorship package may be purchased for $1,995, which includes a private lane for six bowlers (includes team or corporate logo displayed on lane and throughout event on flat screens, six VIP party passes for access to Artist/VIP lounge, two drink tickets per team member, six “Bowl for Ronnie” T-shirts, pizza and shoe rental.

If you can’t get enough of Ronnie James Dio’s message and music, be sure to look out for a plethora of fundraising events headed your way, including a gala for the 10th anniversary of his passing, set to take place Feb. 20, 2020.

“We’re gonna do it at the Wiltern in Hollywood and we’ll have lots of surprises,” Wendy Dio said.

Tickets are now on sale now for the “Bowl for Ronnie” event, at https://bowl-for-ronnie-2019.eventbrite.com