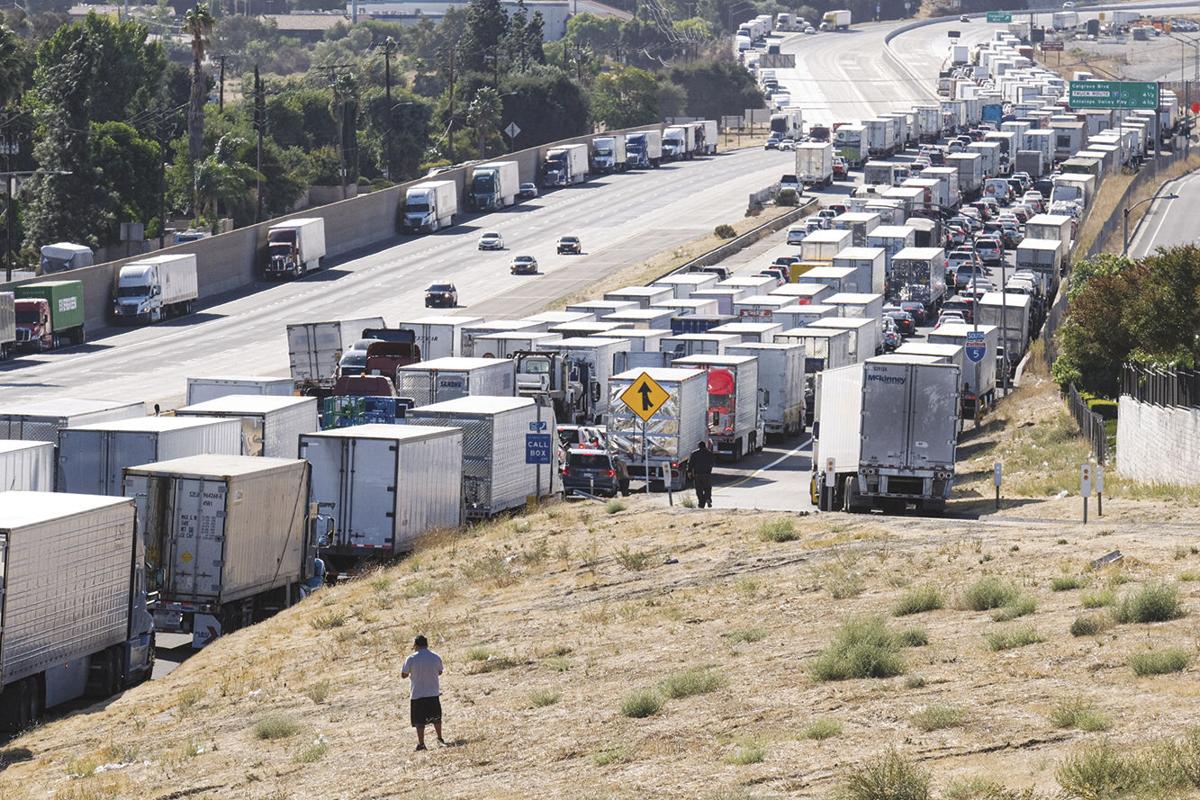 Miles of trucks wait Friday along the Interstate 5 freeway in Newhall as the major roadway leading into Los Angeles remains closed. The raging Saddleridge fire forced tens of thousands of people from their homes as firefighters battled flames from the air and on the ground. 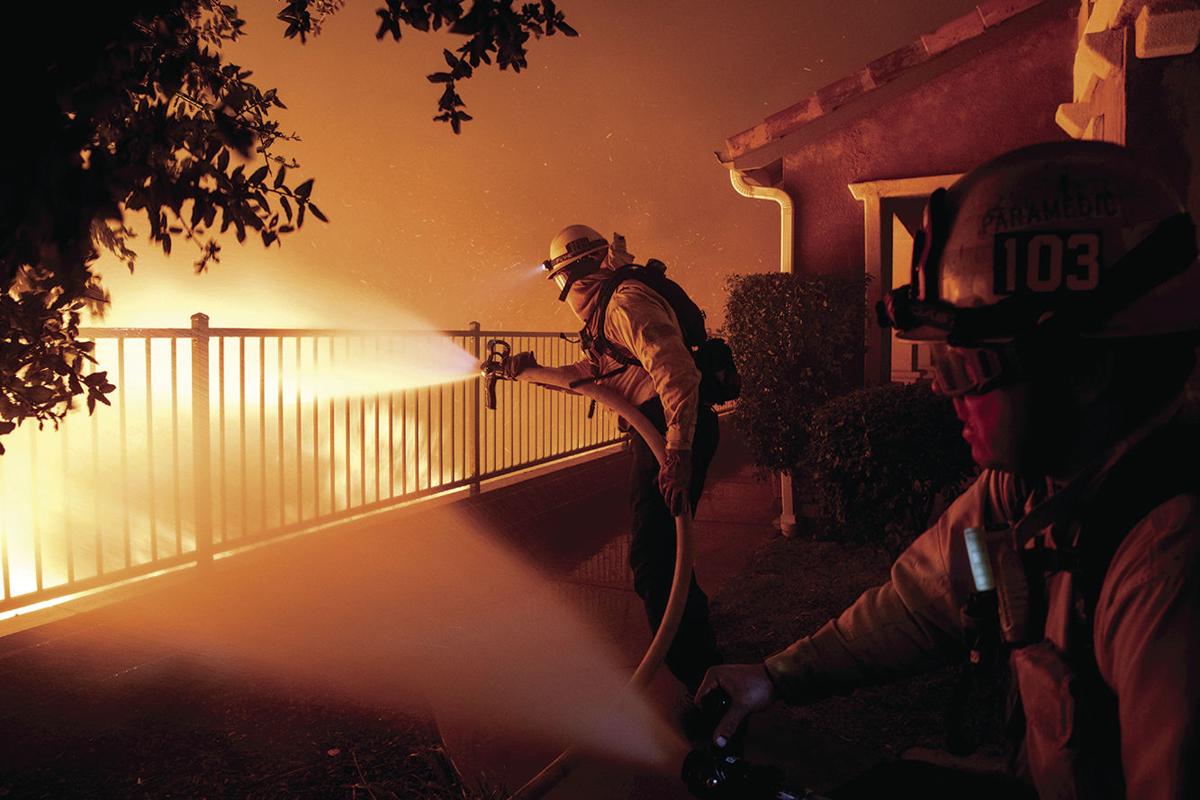 Los Angeles City firefighters battle the Saddleridge fire Thursday night near homes in Sylmar. The area was one of many around the area under mandatory evacuation orders, which affected roughly 23,000 homes.

Miles of trucks wait Friday along the Interstate 5 freeway in Newhall as the major roadway leading into Los Angeles remains closed. The raging Saddleridge fire forced tens of thousands of people from their homes as firefighters battled flames from the air and on the ground.

Los Angeles City firefighters battle the Saddleridge fire Thursday night near homes in Sylmar. The area was one of many around the area under mandatory evacuation orders, which affected roughly 23,000 homes.

The wind-driven brush fire that exploded across 7,542 acres Thursday night continued to rage in the northern San Fernando Valley Friday, forcing the evacuation of roughly 100,000 people and closure of multiple freeways and schools, while causing at least one death.

The blaze was reported just after 9 p.m. Thursday off the westbound Interstate 210 near Yarnell Street and Saddle Ridge Road in Sylmar and quickly spread due to wind-blown embers that jumped Interstate 5 about 11:20 p.m., spreading the flames into Granada Hills and Porter Ranch, according to Margaret Stewart of the Los Angeles Fire Department.

Metrolink officials said the railroad tracks on its Antelope Valley Line were closed between the Sylmar/San Fernando and Newhall stations due to the fire. But some trains were able to make the trip to the Antelope Valley later Friday.

Gov. Gavin Newsom declared a state of emergency in Los Angeles County due to the fire.

An evacuation warning is issued when a mandatory evacuation is anticipated. Residents in this area should be prepared to evacuate immediately, Stewart said.

Mandatory evacuations were also issued for the Oakridge Estates community north of the Foothill Freeway in Sylmar.

At 5 p.m. Friday, the evacuation order was lifted for all homes south of the 118 Freeway, and Los Angeles police were arranging escorts for people in other areas to briefly return to their homes to collect important documents, medications or other needed items.

About 330 juveniles and staff from the Barry J. Nidorf Juvenile Hall in Sylmar were evacuated Friday morning, ABC7 reported. The Sylmar Juvenile Courthouse at the same location was also closed. Court officials said all cases on calendar Friday would be continued, except those with “statutory deadlines,” which were being heard at the Eastlake Juvenile Courthouse.

Authorities urged residents to heed evacuation warnings for their own safety.

Roughly 1,000 firefighters from LAFD, Los Angeles County Fire Department and Angeles National Forest were on the ground battling the flames and eight water-dropping helicopters were deployed. Fixed-wing air tankers were also being sent to the fire.

The Los Angeles Department of Water & Power reported overnight that about 2,500 customers had lost power in the Granada Hills and Sylmar areas. The utility noted that much of the power to Porter Ranch is provided through underground lines, but there had been damage to two overhead circuits and 16 power poles. As of about 8 a.m., DWP reported that 870 customers were without power.

Its cause wasn’t immediately known, though arson investigators said a witness reported seeing sparks or flames coming from a power line near where the fire is believed to have started, said Peter Sanders, a spokesman for the Los Angeles Fire Department.

Terrazas noted that city officials had been working with the Los Angeles Homeless Services Authority to clear homeless people out of fire-prone areas during the red-flag conditions that began Thursday, but he said he did not know if there were any encampments near the flashpoint of the blaze.

The flames also created a traffic nightmare, with all freeways from the north into the Porter Ranch area blocked. Closures that had been implemented on the 118 Freeway were lifted by late morning. Closures on Interstate 5 were lifted late Friday afternoon.

The remaining closures were: