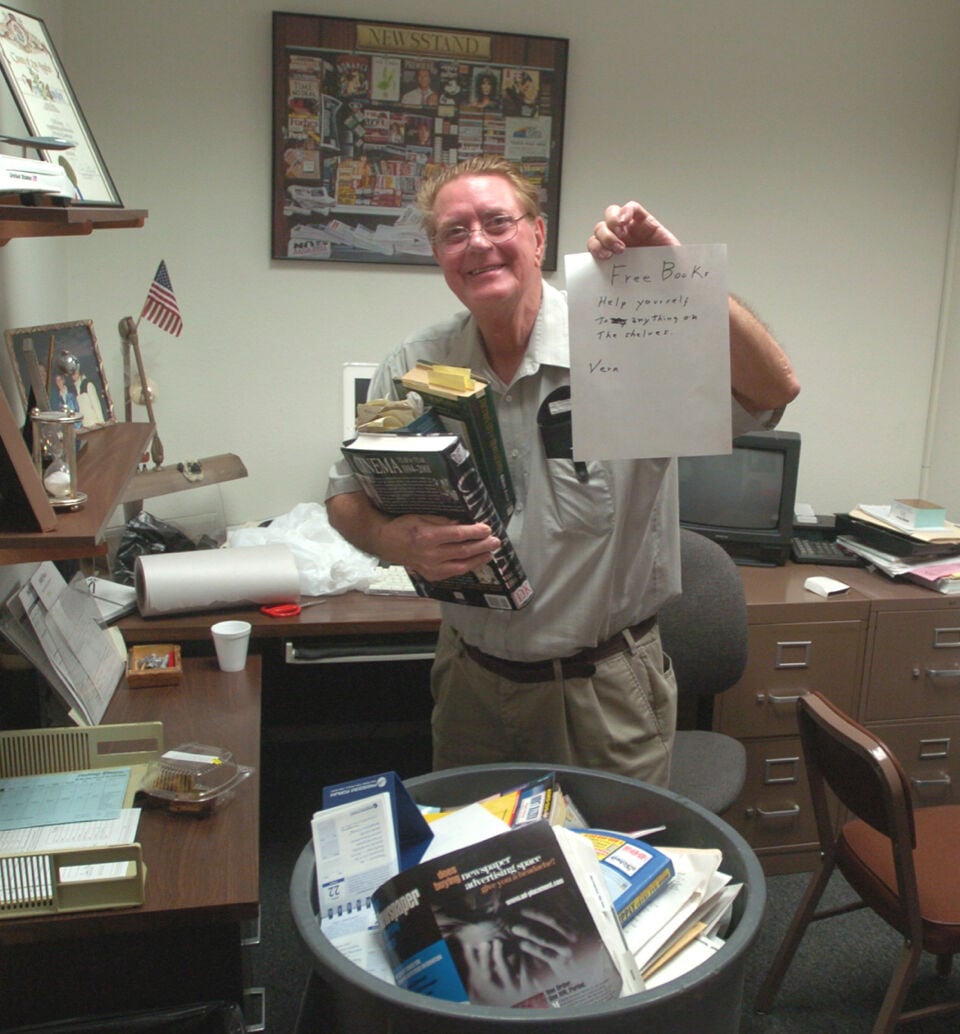 Former Valley Press editor Vern Lawson cleans out his office upon his “retirement” in 2005. He continued writing for the newspaper, with editorials and a weekly column, “In the Vernacular,” until earlier this year. 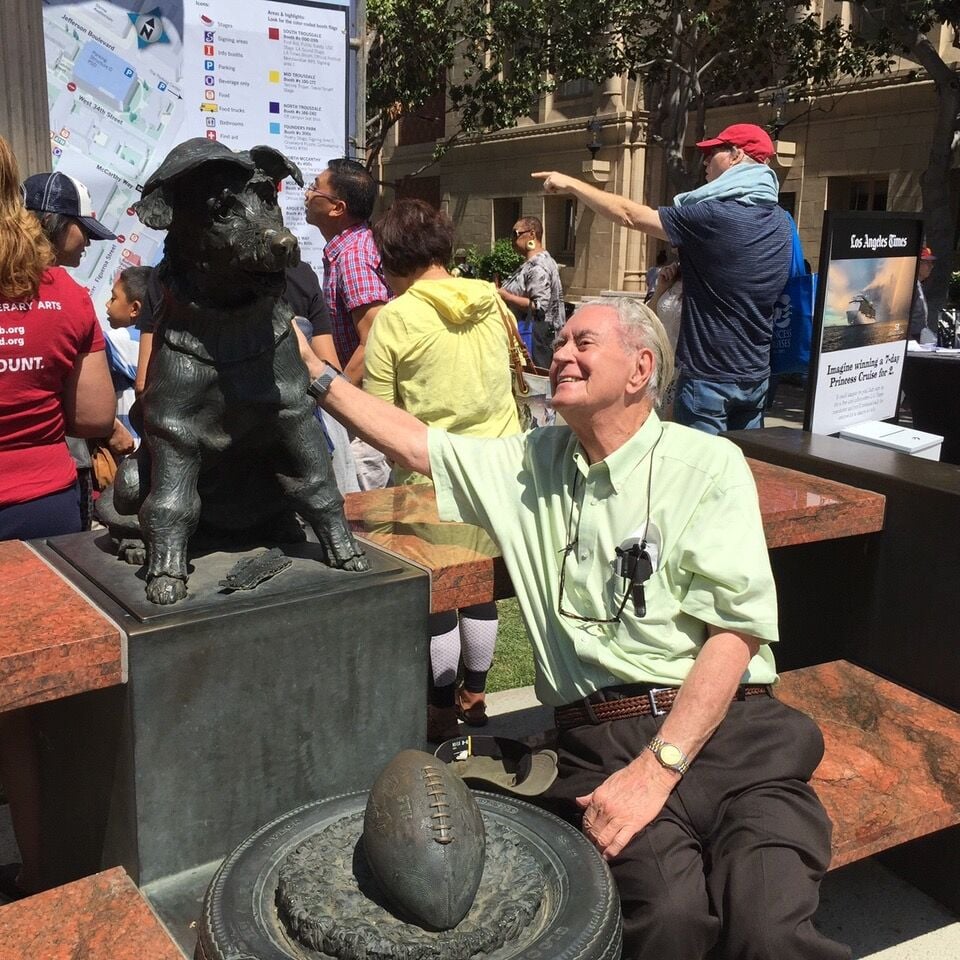 Vern Lawson remained a fan of his beloved USC, having attending on the GI Bill following World War II. On a visit to campus in 2015, he brought his friend and colleague Dennis Anderson to see his favorite campus statue. Not the famous “Tommy Trojan,” but “George Tirebiter,” a shaggy dog that was a much-loved mascot in the 1940s and 1950s. 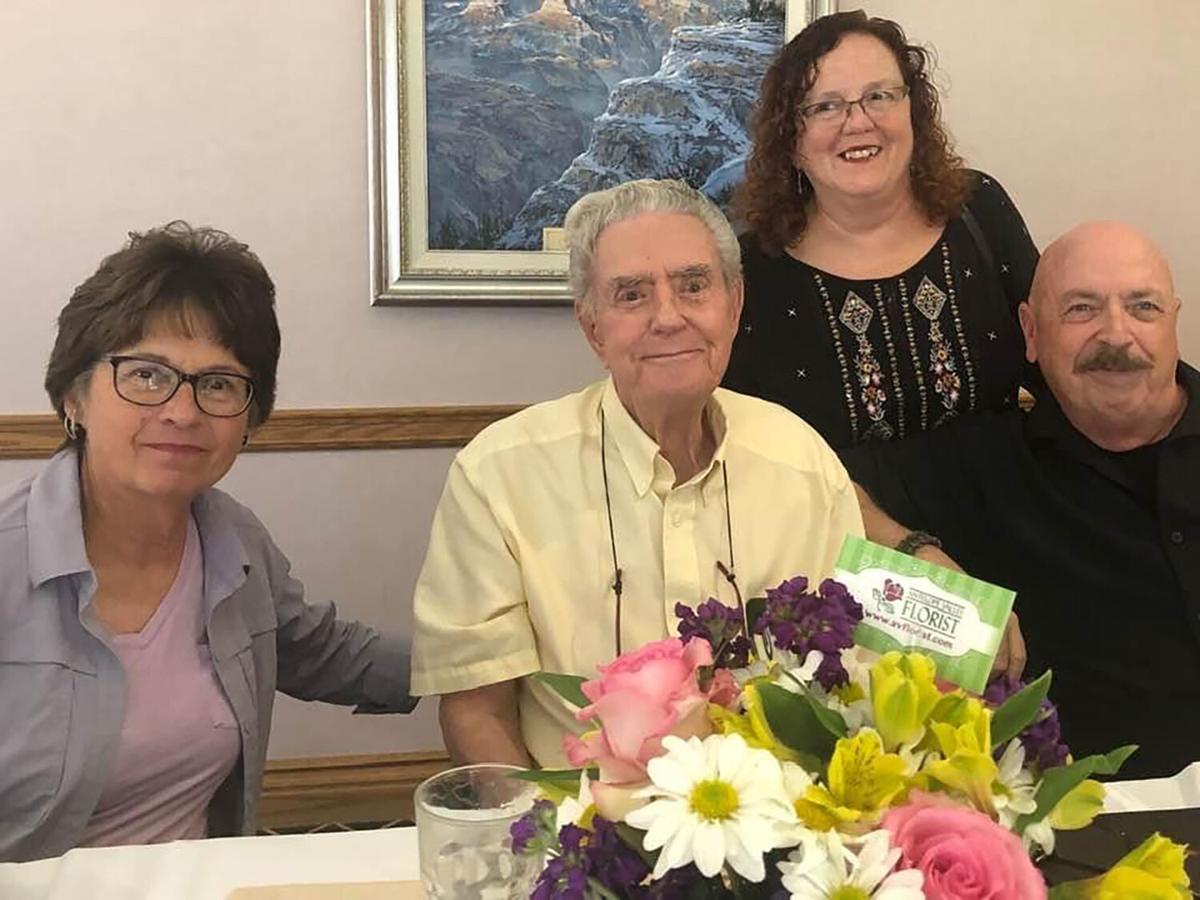 Former Valley Press editor Vern Lawson cleans out his office upon his “retirement” in 2005. He continued writing for the newspaper, with editorials and a weekly column, “In the Vernacular,” until earlier this year.

Vern Lawson remained a fan of his beloved USC, having attending on the GI Bill following World War II. On a visit to campus in 2015, he brought his friend and colleague Dennis Anderson to see his favorite campus statue. Not the famous “Tommy Trojan,” but “George Tirebiter,” a shaggy dog that was a much-loved mascot in the 1940s and 1950s.

LANCASTER — Former editor and columnist, and the man considered the heart of the Antelope Valley Press, Vern Lawson, died at his Lancaster home, Tuesday. He was 95.

Lawson had been a fixture not only in the pages of the Valley Press, but also as part of the Antelope Valley community he loved for more than half a century.

“My father was honest, kind and funny, and a great dad. I was lucky to be his son,” Vern Lawson Jr. said. “My father was there every second of my life, for 70 years.”

“I put thought into this, and I cannot think of anytime that he did or said anything that didn’t reflect well on him. He was a true man of integrity, as a father, as a man,” he said.

Lawson “may very well, at 95, have been the last journalist actively writing editorials and columns who was raised during the Great Depression, and served in World War II,” his friend and colleague, former Valley Press Editor Dennis Anderson, said. “His output into his later years was phenomenal. He contributed un-signed editorials to the Valley Press for years, and his ‘In the Vernacular’ column remained popular with readers right up to the end.”

Lawson is remembered for his wit, as well as his many friendships. “Vern reminded me of Will Rogers,” Anderson said. “He very nearly almost never ‘met a man he didn’t like.’ ”

Lawson was the consummate newspaperman, and prepared his own obituary. The biographical details here are taken from that work.

A member of the “Greatest Generation,” Lawson was born Dec. 17, 1925, in Longview, Washington, although his family moved to their Idaho roots soon after. They lived in Bowmont, about 10 miles south of Nampa, where Lawson graduated from Nampa High School in 1943 and attended one year at the College of Idaho in Caldwell.

He entered the Army Air Corps in July 1944, the month after D-Day. After basic training in Amarillo in the Texas panhandle, he trained in aviation mechanics in Kirtland Air Force Base in Albuquerque, New Mexico, then was assigned to Lowry Field in Denver, where he worked in a laundry room for nine months until VJ-Day ended World War II.

“I was a corporal, and you could say I won ‘The Battle of the Denver laundry,’ ” he quipped. “On VJ-Day (Victory Over Japan) I got kissed by every pretty girl in Denver. It was one of the great days of my life.”

After an honorable discharge on Oct. 29, 1945, Lawson joined his family at the Anderson Dam construction site in Idaho, where his father worked as a mechanic. After a stint as a federal government clerk, he moved west to the University of Southern California, where he entered the School of Journalism, worked on the Daily Trojan, and became a life-long fan of the Trojan football team.

Former Valley Press columnist and Features editor Kim Rawley recalled asking Lawson about how he decided to study journalism at USC. He told her that he asked an admissions counselor what major had the least amount of mathematics involved, and told that it was journalism, he quickly responded, “I’ll take it.”

A week before graduation he landed a job in the Antelope Valley with the Ledger-Gazette in Lancaster.

It was there Lawson met Val, the temporary “society editor,” (a newsroom term for the “Women’s Page”). They married May 28, 1950, in Las Vegas, where he and Val were flown in a private airplane by the legendary aviator “Pancho” Barnes and her husband, Mack. Val had a daughter from a previous marriage, Jeanne.

Lawson left the paper to work in local radio, and returned to print journalism as editor of the Lancaster Light, which folded.

He started his own short-lived newspaper venture as publisher of the Lancaster Leader. “I called it ‘The Light that filed,’ and ‘The Leader’ that followed,” he joked.

In 1957, Lawson joined the Antelope Valley Press, where he worked continuously as an editor until his “retirement” in 2005.

His work for the newspaper continued, however, until shortly before his death.

“I was fortunate to have been able to work with Vern for the past three years, as he continued, even in retirement, to write for the newspaper,” Valley Press Editor Jennifer Garcia said. “He touched many lives in the Antelope Valley through his work as a journalist and will be greatly missed.”

“Vern was a valued contributor to the Valley Press for decades,” Valley Press Publisher Steve Nakutin said. “His unique style and talent will be missed by all those fortunate enough to have read  his columns. Our appreciation for his work will live on in perpetuity.”

Two years after Val’s death in July 1973, Lawson wed his second wife, Margie, a teacher at Edwards Air Force Base, on Aug. 15, 1975. Margie Lawson died in 2008 after many years owning and operating Margie Lawson’s Gourmet Center on Lancaster Boulevard.

The couple traveled extensively during their marriage.

“I don’t know anybody who was more traveled,” Vern Lawson Jr. said, recalling a map on his father’s wall with 110 pins in it, all places they had visited.

Lawson translated those experiences into his writing, and in 1999 he won a California Newspaper Publishers Award for a feature about flying supersonic on the Concorde to London and back in a few hours.

“We’d have philosophical discussions such as whether Vern subconsciously screwed up household repairs because he knew he would get a column out of it,” Warford said. “He insisted he did not, but we both agreed that one advantage to being a columnist is that if things go bad, at least you get a column out of it.”

He recalled, during his time as Opinion section editor, he edited Lawson’s editorials.

“His was the cleanest copy I ever worked with — almost never a dropped word or error in the spelling, punctuation or grammar,” Warford said. “He was the consummate pro and took his time to make each piece just right.

“Many years ago, Vern read about a woman who was still writing a column at age 100,” Warford said. “And I remember him saying that was his goal: to still be writing his column at 100. And only in the last few weeks did it ever occur to me that he might not do it.”

“In the newsroom Vern led with quiet, unwavering integrity,” she said. “What made him the consummate journalist was his genuine interest in everything and everyone. He could be quite funny and was often the butt of his own jokes, presenting himself as a bumbler, hardly capable of changing a lightbulb. In fact, Vern was brilliant, even if he didn’t know what to do with a wrench.”

Anderson met Vern in 1985 while working on a feature for The Associated Press about “Aerospace Valley.”

“He greeted me at the entryway of the Valley Press offices with a tray and armload of aerospace clippings, smiling in greeting, and saying ‘Make any use of this that you need.’ There were 40 years of clippings,” he said.

Lawson was a voracious consumer of news, reading multiple publications daily. As the Valley Press reporter covering aerospace, Allison Gatlin recalls frequently finding clippings relating to the local industry on her desk with a brief note from Lawson. The notes continued long after he retired, by email with links to stories.

John Manning was a longtime friend of Lawson, one of a group of men who met for breakfast around town once a month to discuss the state of things.

A plastic surgeon, Manning once operated on Margie Lawson. He recalled Lawson asking him before the surgery to “take good care of my wife.” For years after that, Lawson would thank him for doing so, Manning said.

“He was the consummate gentlemen,” said Janice Hall, who with her husband John were dear friends for many years.

No services are planned, with burial set for Lancaster Cemetery.

A scholarship in the name of Vernon Lawson Sr. for the Antelope Valley College Foundation can be found at: https://www.avc.edu/foundation/campaigns