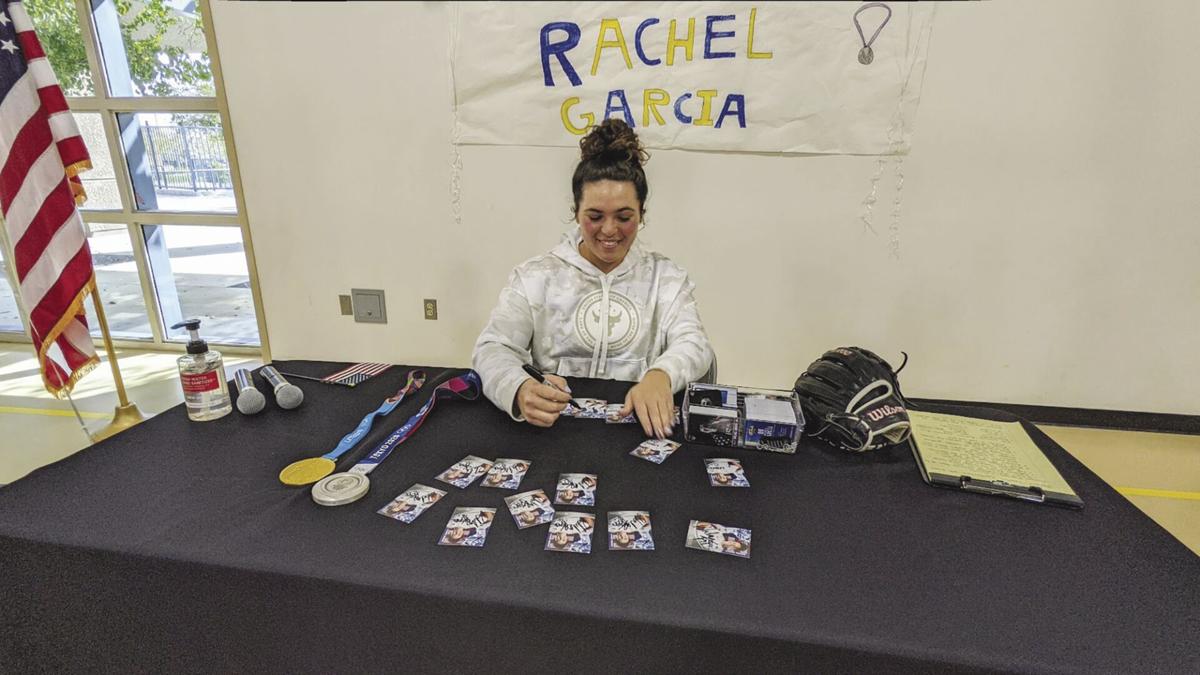 Olympian Rachel Garcia signs player’s cards after speaking to about 300 fifth- through eighth-grade students at Palmdale Learning Plaza, on Friday. Garcia attended the school in her youth. 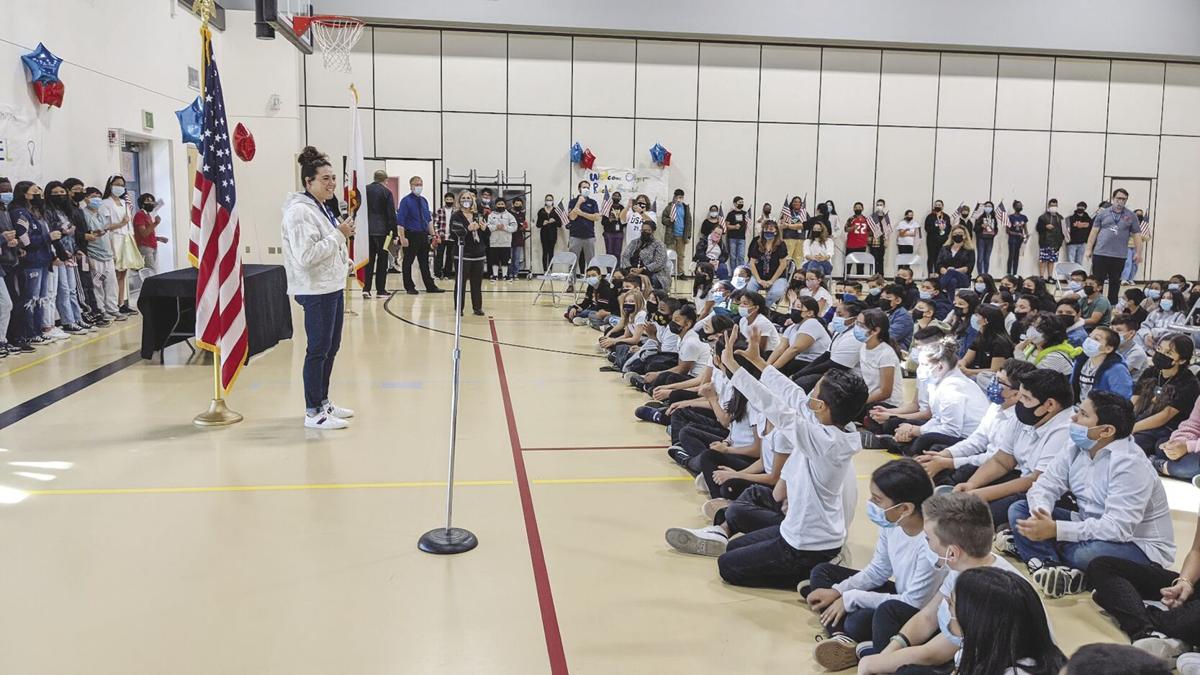 Olympian and Palmdale Learning Plaza graduate Rachel Garcia encourages about 300 fifth though eighth grade students at the school to set high goals for themselves.

Olympian Rachel Garcia signs player’s cards after speaking to about 300 fifth- through eighth-grade students at Palmdale Learning Plaza, on Friday. Garcia attended the school in her youth.

Olympian and Palmdale Learning Plaza graduate Rachel Garcia encourages about 300 fifth though eighth grade students at the school to set high goals for themselves.

PALMDALE — Olympian Rachel Garcia dazzled the students and staff at Palmdale Learning Plaza when she stopped by her former school for a visit Friday morning.

As a member of the USA National Team, Garcia is a 2020 Olympic silver medalist, a 2019 Pan American Games gold medalist and a 2018 WBSC Women’s World Championship gold medalist.

“We’re very proud of her,” said Beverly Gonda, the school’s International Baccalaureate coordinator. “She’s an inspiration to us. We like to organize events such as these to encourage our students.”

Dean Gorder, Garcia’s former sixth-grade teacher, introduced her. He recalled a parent-teacher conference with Garcia and her mother Chris where he asked the 12-year-old what her dreams and goals were.

“She said, ‘Well, I want to pitch and bat for UCLA,’ ” Gorder recalled.

Garcia did just that, Gorder said. He then shared some of Garcia’s numerous awards. He asked the student to wait until he was finished before they applauded. That took a few minutes.

At UCLA, Garcia was a two-time USA Softball Collegiate Player of the Year. She was also national pitcher of the year. As a senior at UCLA, Garcia led UCLA to the College World Series national championship in 2019.

She was named the most valuable player of the College World Series. She is also a two-time Honda Award and Cup winner as the nation’s top female athlete.

“She was also named one of college’s greatest all-time pitchers,” Gorder said.

“Rachel Garcia is the epitome of what it takes to be an IB student,” Gorder said.

Garcia walked out to cheers and applause from the 300 fifth- to eighth-grade students seated on the floor and on the bleachers.

Garcia introduced herself, then pitched softballs to Principal Susan Summers and teacher Greg Weideman at Gorder’s suggestion. She took the microphone again for a question-and-answer session with the students.

She encouraged the students to set minor goals along the way.

“If you accomplish those minor goals, it sets you up for success,” Garcia said.

Afterward, Garcia signed her player’s card for every student in the gymnasium. Some students also asked Garcia to sign their athletic shoes, a cellphone case and a couple of hands.

Garcia graduated from Palmdale Learning Plaza in 2011. Friday was her third visit back to the school but the first as an Olympic silver medalist.

“It’s a little mind-blowing because it’s been so long since I graduated from here,” Garcia said.

Sixth-grader Matthew Harned said he had heard about Garcia previously but did not know much about her.

“Now I know a lot more about her and she’s actually helped others achieve their goal in softball and other sports,” Harned said.

“I never expected to see someone famous like Rachel Garcia in real life,” Harned said. “I mean I’ve seen other famous people in person before like artists, singers and whatnot but never an Olympian.”

“Knowing that she came to our school just proves that we can do anything,” Clarke said. “She’s like a huge inspiration to a lot of people.”

“I think there’s a really good example of what an IB student can achieve,” Sensano said. “That just creates how far we can get in live and it’s really inspirational.”