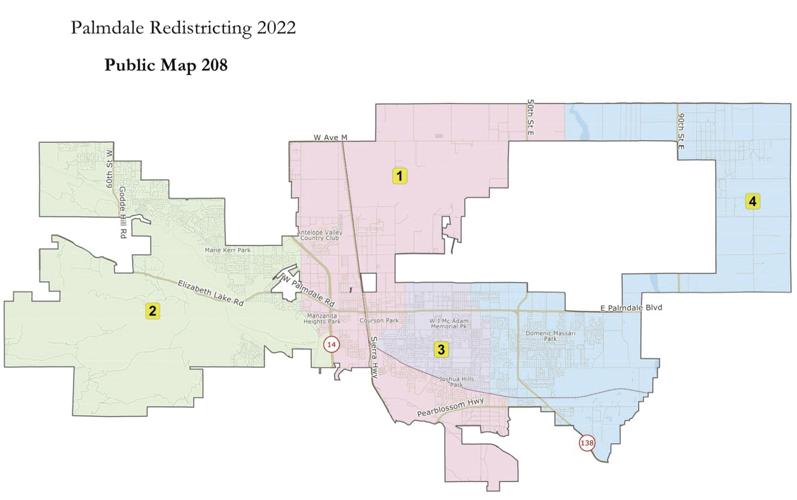 Palmdale’s Advisory Redistricting Commission will recommend two maps of new boundaries for the four City Council districts, based on the 2020 Census data, for the City Council’s consideration, on Feb. 2. One of them (above) is designated Map 208. 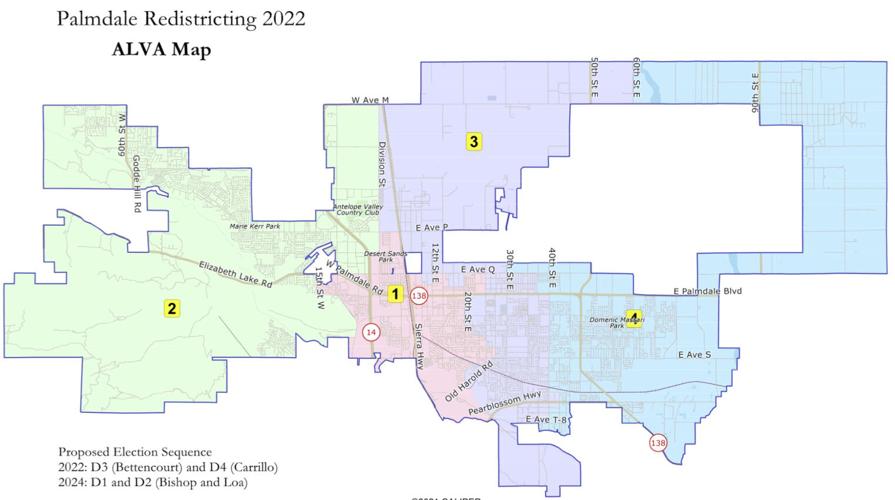 Palmdale’s Advisory Redistricting Commission will recommend two maps of new boundaries for the four City Council districts, based on the 2020 Census data, for the City Council’s consideration, on Feb. 2. One of them (above) is designated the ALVA map.

Palmdale’s Advisory Redistricting Commission will recommend two maps of new boundaries for the four City Council districts, based on the 2020 Census data, for the City Council’s consideration, on Feb. 2. One of them (above) is designated Map 208.

Palmdale’s Advisory Redistricting Commission will recommend two maps of new boundaries for the four City Council districts, based on the 2020 Census data, for the City Council’s consideration, on Feb. 2. One of them (above) is designated the ALVA map.

PALMDALE — The Advisory Redistricting Commission will recommend two maps to the City Council, next month, to consider for the city’s ongoing process of redrawing the district boundaries for Council seats, using data from the 2020 Census.

The Commission was formed to create maps that fairly represent the city’s population and meet all state and federal requirements.

The maps created to divide the city into four Council districts must result in roughly equal populations in each district.

At its final scheduled meeting, on Thursday, the Commission reviewed 11 maps, drawn by the city’s demographic consultant and members of the public.

“This is really vitally important for what we’re doing,” Commission Chair Suzann Reina said. “I think that we’ve done a diligent job.”

They narrowed the field down to first four, then two maps, both drawn by members of the public or community organizations.

The first map, titled Map 208, was submitted by the public. It designates the west side of the city, essentially from 10th Street West, as District 2, and the far east side as District 4. It creates a compact District 3 in the city’s most populous east-central area and District 1 stretches from Columbia Way (Avenue M) to Pearblossom Highway in between Districts 2 and 3.

This map has the most equally divided population of those considered, with a .05% difference between the largest and smallest districts, according to the analysis provided by consultant NDC.

The second map recommended by the Commission is one created by the community organization ALVA. This map is somewhat similar to 208, except that District 1 is compacted between roughly Rancho Vista Boulevard (Avenue P) and Pearblossom Highway and approximately 10th Street West and 20th Street East. District 2 is the city’s west side, District 3 stretches from Columbia Way beyond Pearblossom Highway and District 4 is the city’s east side from roughly 40th Street East.

This map has a difference of 2.84% between the largest and smallest districts. The federal requirement is a deviation of less than 10%; both recommended maps are well within this requirement.

The current district map, with the latest population figures, actually still fits under that requirement, with a deviation of 8.09%, consultant Kristen Parks said.

The demographic distribution of the citizen voting-age population is nearly the same as for Map 208.

During a public hearing on the draft maps presented, on Jan. 12, a number of residents voiced their support for the ALVA map, which was submitted too late to have been analyzed in time for that public hearing, but was prepared for the Commission meeting a week later.

The recommendation will be considered by the Council during a public hearing, on Feb. 2.

At that time, the Council may choose one of the two recommended maps, or they may send them back to the Commission with specific reasons for rejection and ask for further refinements to the maps.

The deadline for adopting new maps is April 17. The new districts will be in effect for the November 2022 elections.