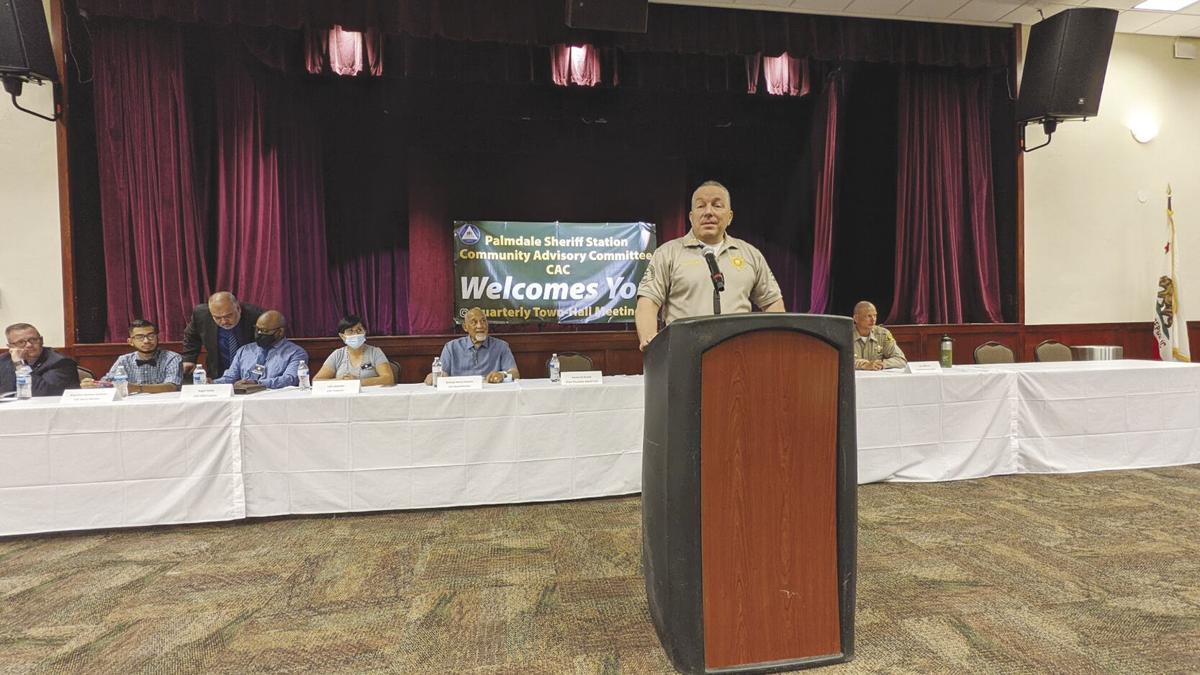 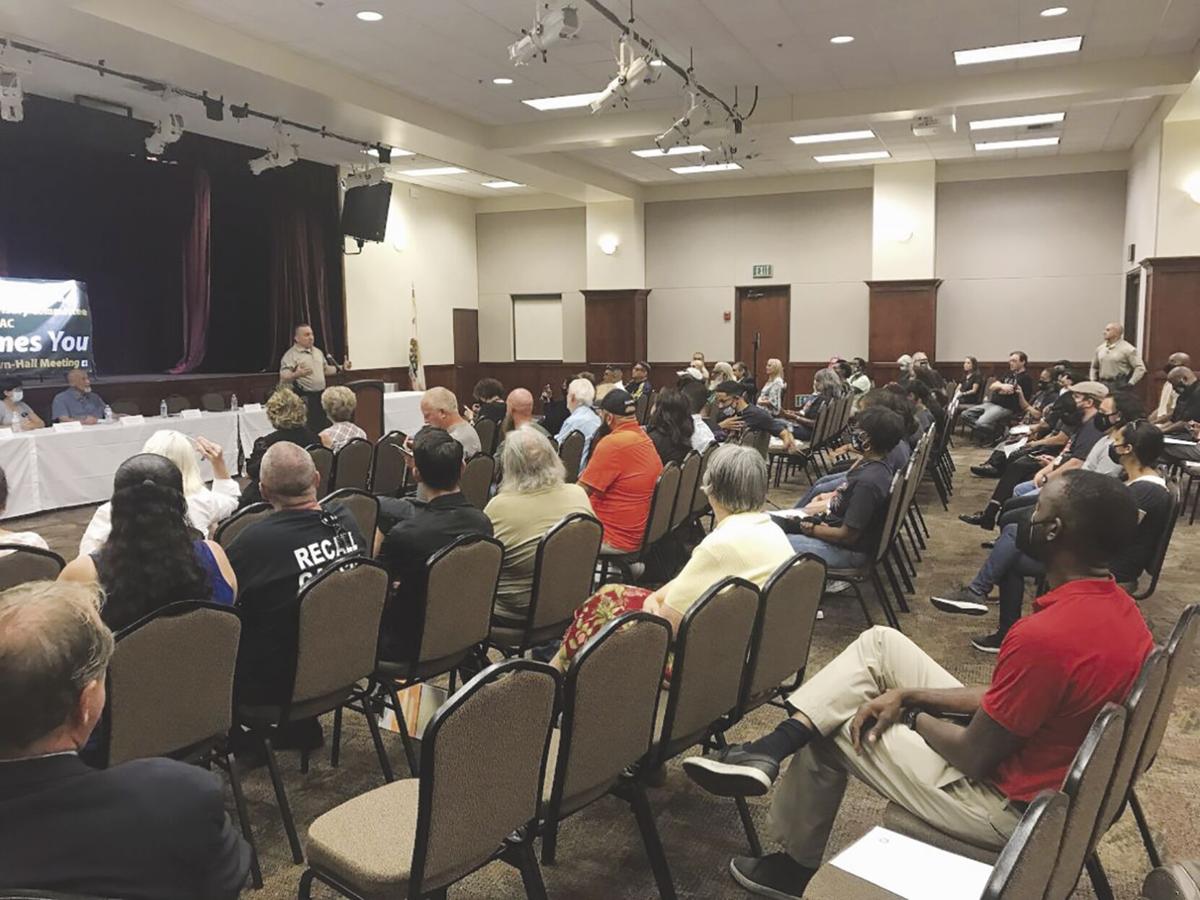 Dozens of residents turned out Thursday night for a town hall meeting with Los Angeles County Sheriff Alex Villanueva. The crowd brought up a variety of sensitive topics with its questions.

Dozens of residents turned out Thursday night for a town hall meeting with Los Angeles County Sheriff Alex Villanueva. The crowd brought up a variety of sensitive topics with its questions.

“Violence is a wicked problem,” Villanueva said. “Homelessness, illegal cannabis industry is a tame problem because there are some solutions that we can actually get our hands on and address. Violence itself has many, many components.”

The format upset some attendees who were not aware that cards submitted with their questions would be read out loud rather than individuals approaching the microphone.

Committee member Nigel Holly organized the cards by subject to try to get to as many questions as possible with a focus on the three topics.

“We need to speak, not you,” one person said.

After more interruptions from audience members, it was Villanueva who suggested they alternate between the written questions and in-person questions. Holly ended up reading anonymous questions and then calling the names of people who submitted their questions to the microphone so they could ask the questions themselves.

In regard to school resource officers, one anonymous questioner said many students feel intimidated by seeing armed individuals on campuses.

“What precautions would you take to ensure the safety of students as well as providing a comfortable environment?” the person asked.

Another anonymous questioner asked whether Villanueva would move to remove deputies from campuses.

Villanueva called it a matter of perspective.

“For the one person who feels intimidated by a deputy on campus there’s another person that says thank god you’re on campus. So it’s all a matter of perspective … The ones who feel intimidated, unfortunately, it’s a learned fear,” Villanueva said, drawing jeers from the audience.

“Black and Latino students out here are disproportionately affected, suspended, expelled, they go to jail for nothing,” one woman called out.

Activist Christian Green of Cancel the Contract AV asked Villanueva how the Sheriff’s Department can build transparency when there is a lack of trust with the Citizens Advisory Committee as well as with the community.

“I would love to hear the sheriff’s idea as well in regards to us looking at building community-based approaches … looking at how to remove sheriffs from specific areas because we are overly policed, overly marginalized,” Green said.

Villanueva said when he took office he launched a transparency promise. The LA County Sheriff’s website has a transparency page at https://lasd.org/transparency/ with information on topics such as deputy-involved shootings, body-worn cameras and accountability.

“This is transparency,” Villanueva said. “If you compare the sheriff’s department to any other county department, we are hands-down by far the most transparent of all.”

Villanueva added they do not release the names of deputies whose lives have been threatened.

“That should be an end goal, but we don’t eliminate the cops then expect some magic to happen. What’s going to happen is going to be chaos,” Villanueva said.

‘We have roughly 3,000 deputies working patrol in 3,100 square miles. So do the math; there’s not a whole lot of us,” Villanueva said.

He added the department is no longer hiring people out of state or even out of the county to be LA County deputies.

Villanueva said by the end of March there were an estimated 2,600 cases not filed by the district attorney due to the special directives he put in place after his election.

Gascón is facing a potential recall election for his policies, which critics say favor criminals at the expense of victims.

Villanueva said he needs lag time to know in advance.

Activist Isabel Flax asked Villanueva what happens to police officers who falsify reports, and what can be done about “driving while black.”

“Out here, minor traffic violations can result in death, over a taillight being off,” she said.

She also asked about deputies in schools. She said a local teacher called the school resource deputy for what appeared to be a disciplinary matter in the classroom.

“You need to help people that need the most help, Blacks, Latinos,” Flax said.

Villanueva said if a deputy falsifies a report, they will not stay with the department long. He said the department investigated 60 criminal cases of employees, of which 15 were domestic violence cases.

“Everyone’s equal in the eyes of the law; it doesn’t matter if you’re wearing a badge,” he said.

In regard to racial profiling, Villanueva said they and other departments are collecting and analyzing data to track it.

“It has to be robust oversight,” Villanueva said.

Villanueva said school resource deputies should be available in times of crisis and to serve as mentors and positive  role  models and not be involved with school discipline.

“The only time a school resource officer should be involved in anything with an actual crime is someone was going to get hurt,” he said.

Villanueva seems to be on point. Thank god they are on campus. We have seen the outcome when authority is removed. Just look at the results in Portland Oregon it has become the biggest cesspool in America.