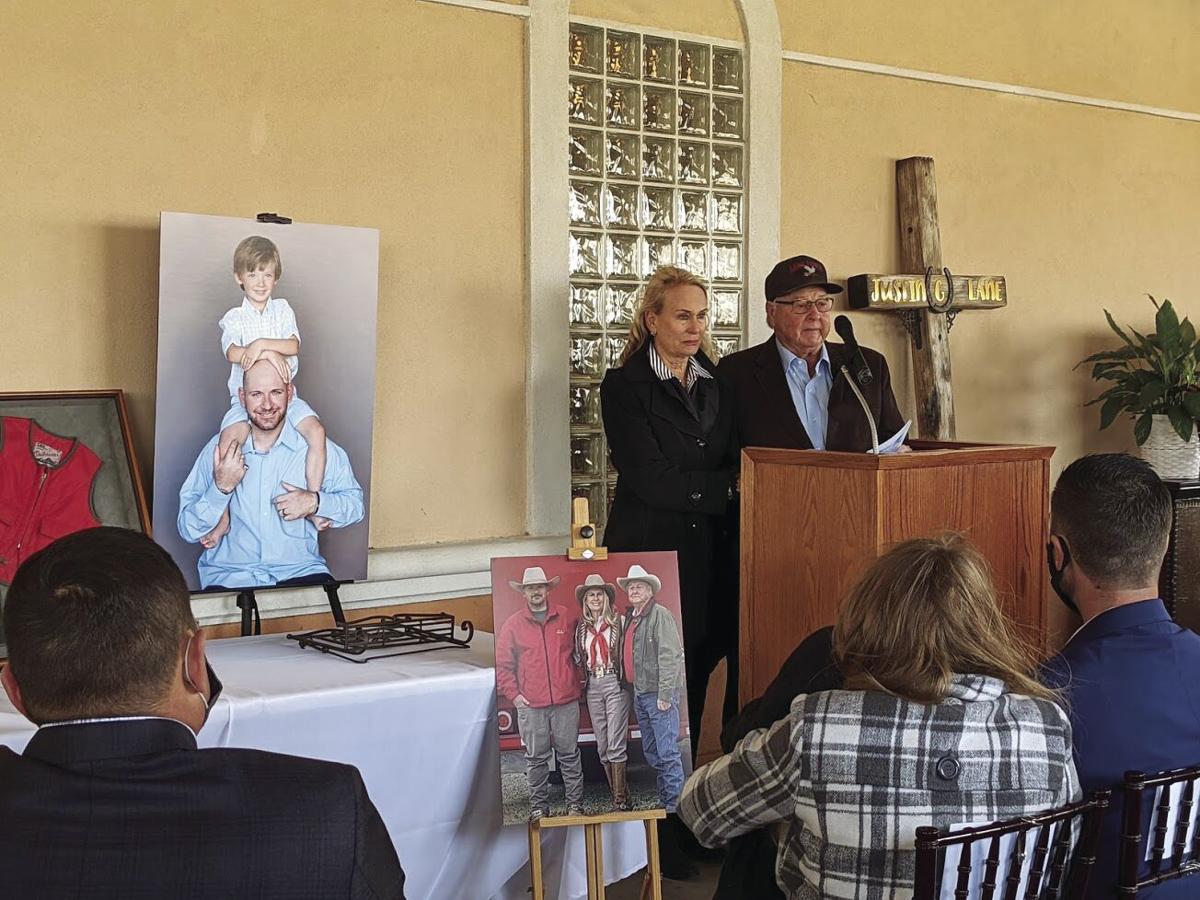 George Lane (left) talks about his son, Justin George Lane at a Tuesday morning funeral service at Joshua Memorial Park for his late son as George’s wife and Justin’s mother Charlene looks on. 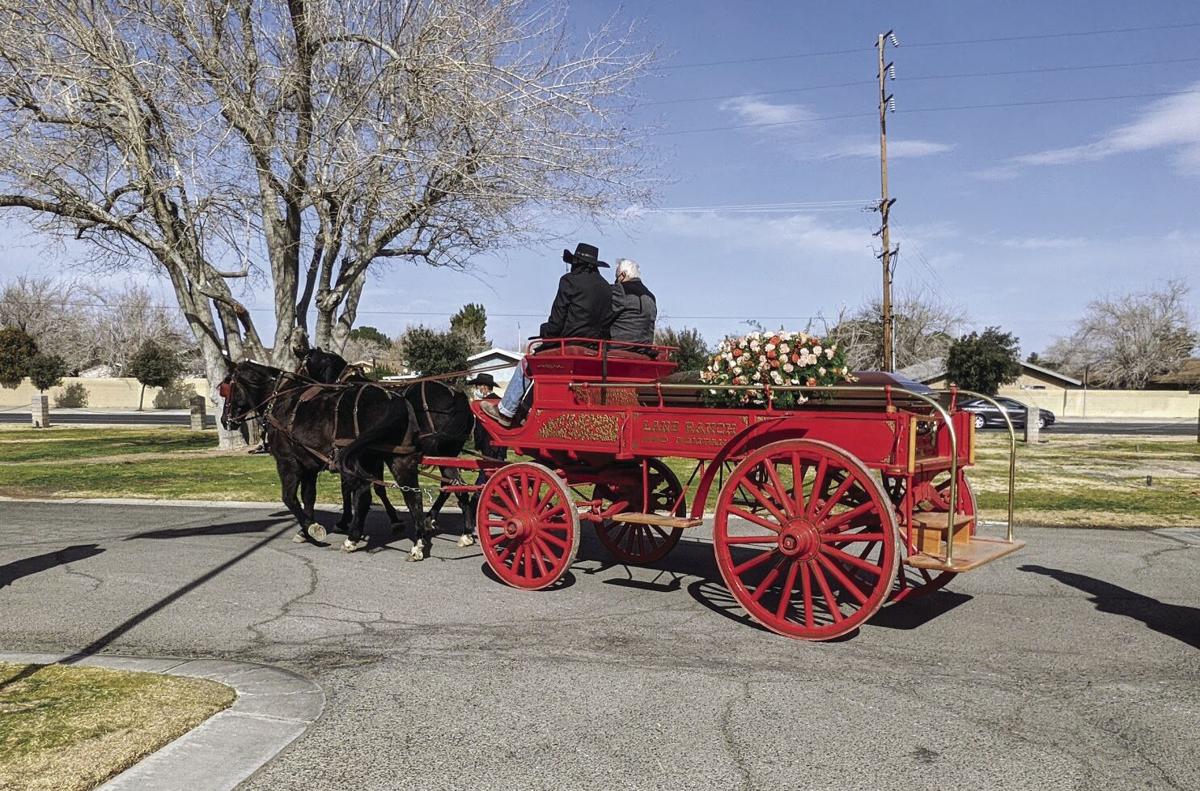 A horse-drawn wagon carries the flower-draped casket of Justin George Lane to his burial site at Joshua Memorial Park following his funeral service.

George Lane (left) talks about his son, Justin George Lane at a Tuesday morning funeral service at Joshua Memorial Park for his late son as George’s wife and Justin’s mother Charlene looks on.

A horse-drawn wagon carries the flower-draped casket of Justin George Lane to his burial site at Joshua Memorial Park following his funeral service.

LANCASTER — Justin George Lane was a man of faith, a family man, an athlete, an accomplished cowboy and a fourth generation businessman who carried on the Lane family’s ranch tradition and legacy.

Those were some of the memories shared by family and friends at his funeral service Tuesday morning at Joshua Memorial Park. It featured a horse-drawn wagon procession to the burial site.

Lane’s favorite rope horse, Easy, accompanied his casket to the site. His saddle was empty and his empty boots were in the stirrups.

Lane, 34, died Jan. 1 in a water truck accident. He is survived by his wife Jessica, five-year-old son Bronson, parents George and Charlene Lane and many friends.

“Words cannot express the love for Justin and his family … Justin’s love for family and friends are unequaled,” George Lane said.

Justin Lane drove the Wells Fargo stagecoach and horse hitch throughout the western United States, including the Pasadena Tournament of Roses Parade.

“He very much enjoyed the stagecoach,” George Lane said.

Ann Brown watched Justin Lane grow up. About 20 years ago, she started working at the family business, Monte Vista Building Sites, Inc., where he served as vice president at the time of his death.

Brown said their relationship grew over the last five years or so as they had deep and light conversations about life.

“Justin was a sensitive and tender guy,” she said. “He loved his parents so much that he had no problem telling others about it. He truly appreciated everything you guys had done for him.”

Brown said he liked to tell stories. He was beyond his years as a businessman. He was protective of his family. He always took time to say thank you.

“He appreciated God’s beauty …,” she said. “He would say, ‘Hey, did you guys see that moon last night, or hey, did you see the sunrise?’ I do not see sunrises.”

Longtime friend Kyle Wright was neighbors with Justin Lane, growing up. They met when Wright was a shy eight-year-old who rode by the Lane house on his bicycle, as Justin Lane rode his skateboard in the driveway. Wright asked him if he wanted to join on a bike ride.

“My life changed forever that day,” Wright said. “We were inseparable from that day on. We spent so much time together that the Lanes truly became my second family.”

He even chose the same major as Justin Lane, agriculture business, after he finished high school.

“That’s how it was with us — Justin would blaze a trail and I would follow,” Wright said. “He was a leader in everything he did and always made sound decisions.”

“His persistence to excel in the sport was infectious; that’s who Justin was,” Wright said. “He loved sharing everything he knew to help others succeed.”

Friend Matt Shiogawa said Justin Lane was like a little brother to him.

“Justin was a blessing in our lives,” he said.

Friend Donny Thompson said Justin Lane would not want people to feel sad about everything.

“Let’s just all remember all the good memories that we have of him,” he said.

Justin Lane was a partner of Lane Ranch and Co. and a Board member of the Antelope Valley East Kern Water Agency.

He was a member of the Screen Actors Guild and appeared in many commercials, TV shows and movies in many wrangler capacities. He was scheduled to begin a three-month job on the film “Miracle Workers 3” on Jan. 4.

The service included a video montage of Justin Lane. Afterward, his flower-draped casket was placed in the bed of a red Lane Ranch and Co. horse-drawn wagon. Mourners followed the wagon across the park to the burial site.