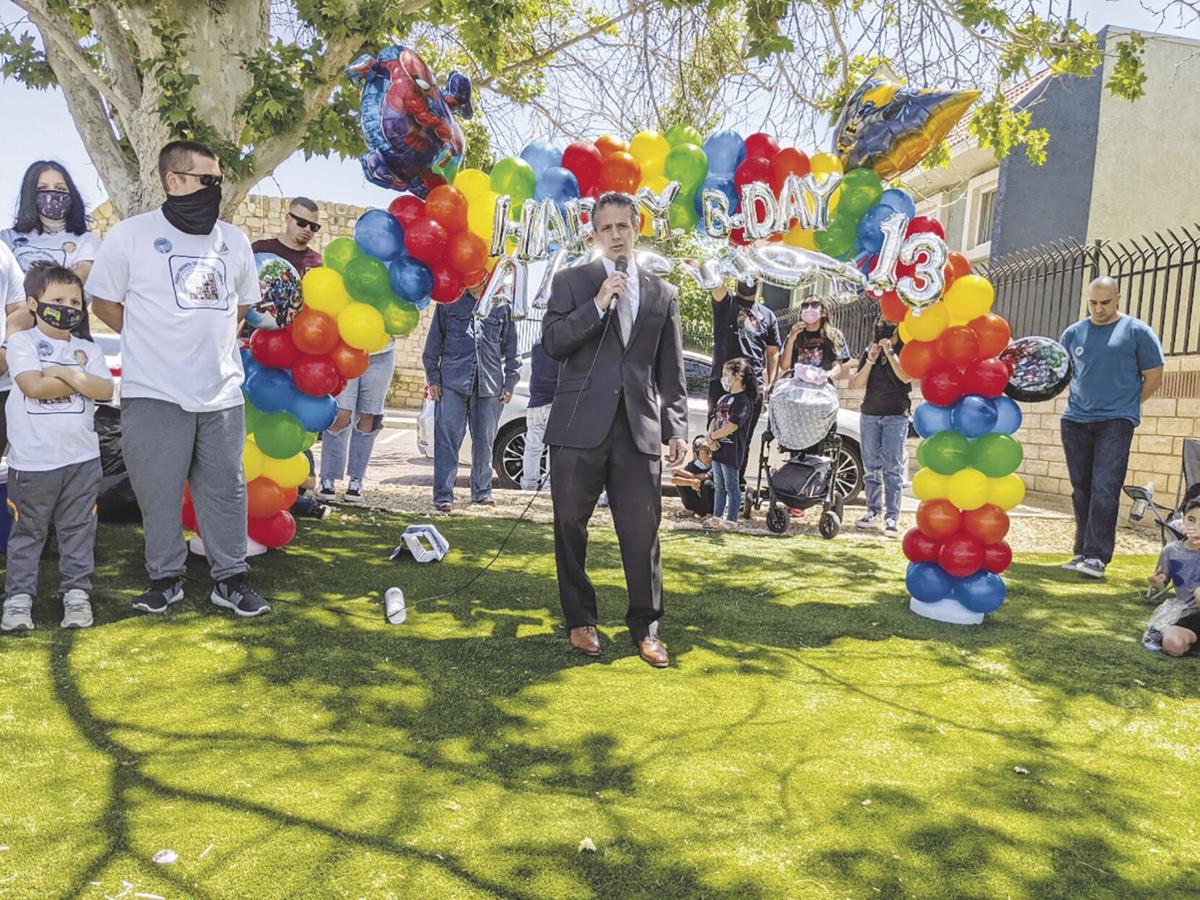 Deputy District Attorney Jonathan Hatami addresses the crowd Saturday in Lancaster at a Celebration of Life for Anthony Avalos, who would have turned 13 years old on May 4. Anthony’s mother and her boyfriend are charged with murder and torture in the 10-year-old’s death in June 2018. 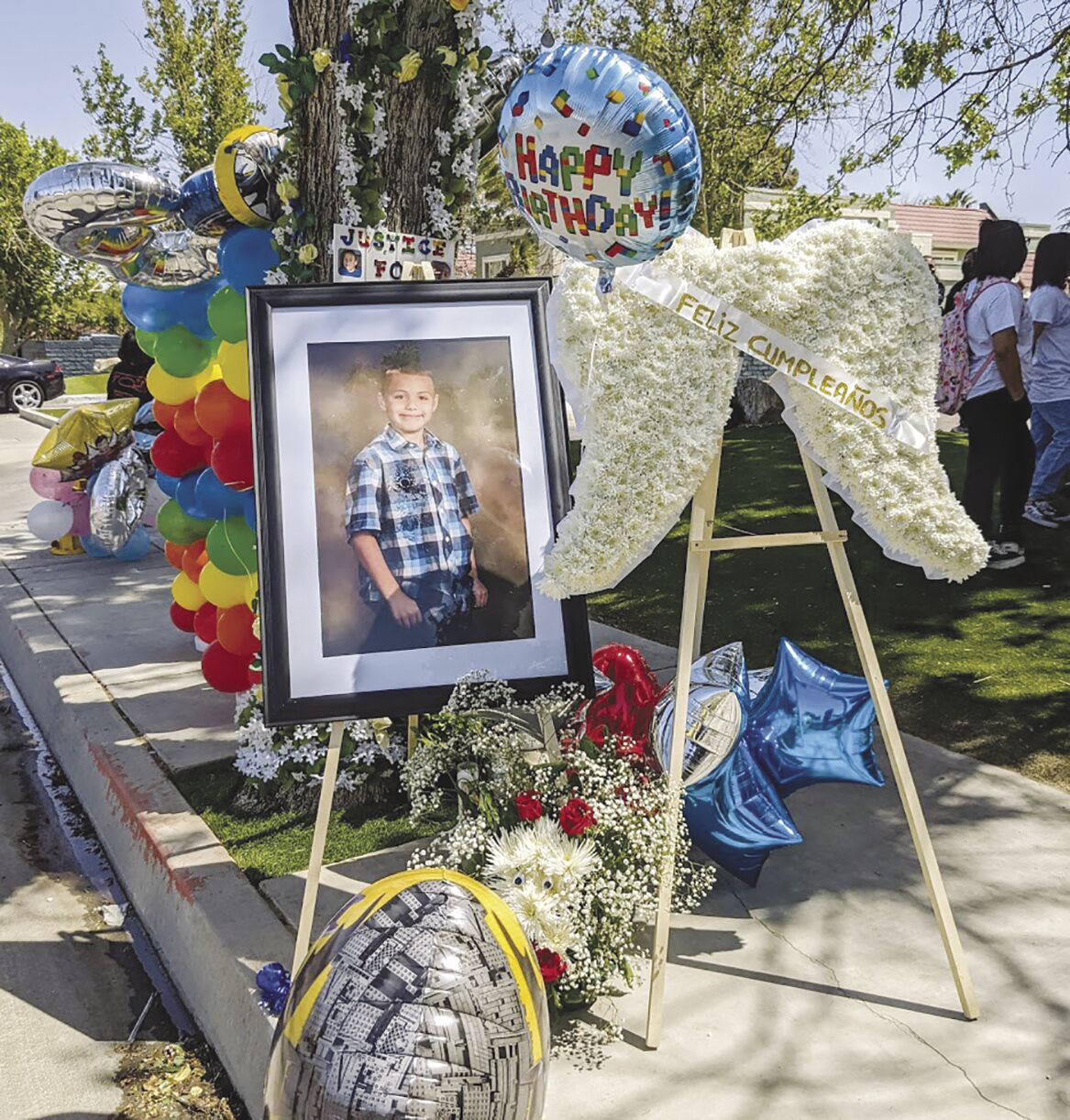 A portrait of Anthony Avalos stands next to the Anthony Avalos Memorial Tree in Lancaster for a Celebration of Life ceremony attended by family and community members. 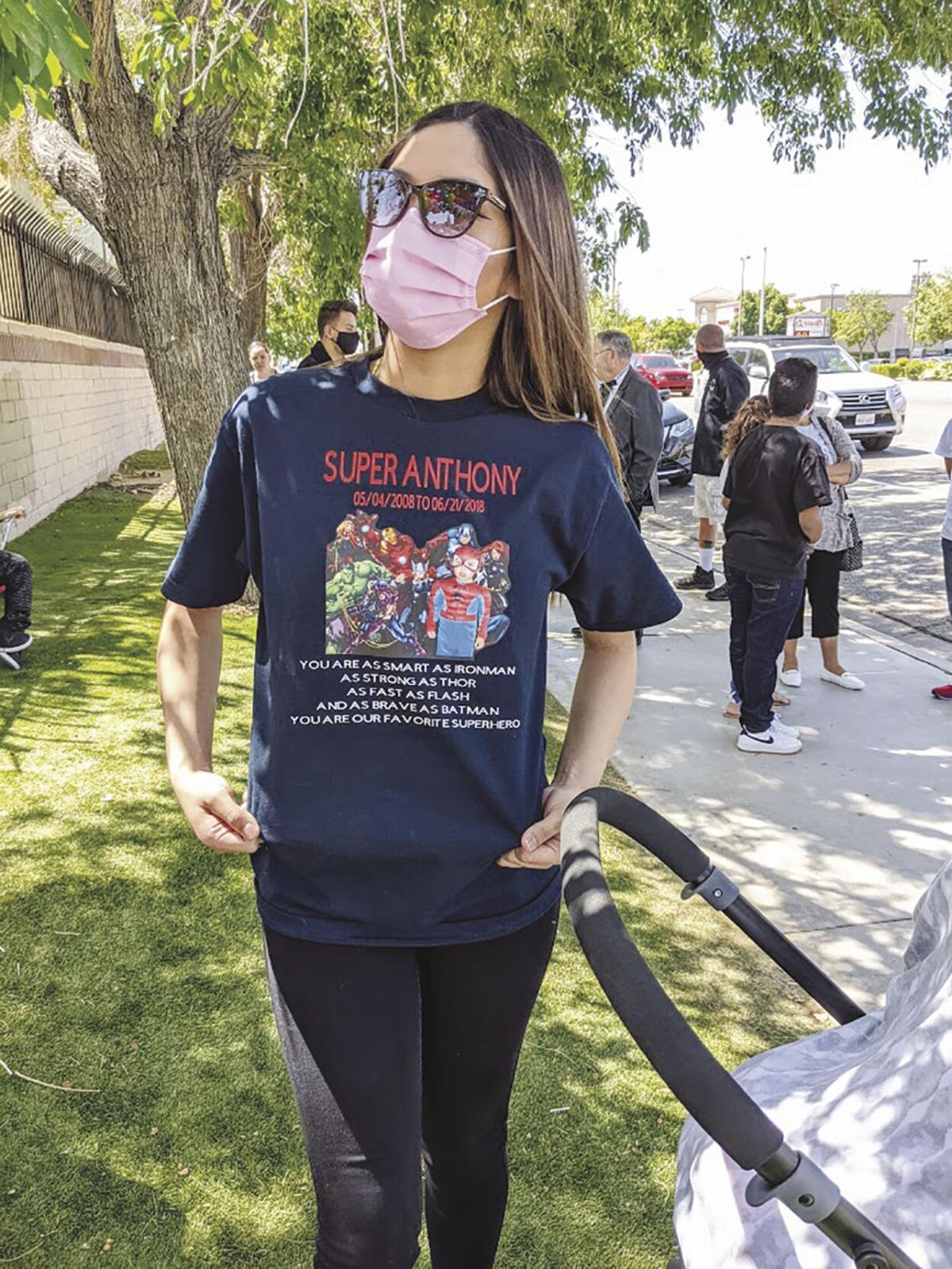 Maricruz Avalos, aunt to Anthony Avalos, who was allegedly tortured and killed by his mother and her boyfriend displays a T-shirt made in his honor at a Celebration of Life ceremony on Saturday in Lancaster.

Deputy District Attorney Jonathan Hatami addresses the crowd Saturday in Lancaster at a Celebration of Life for Anthony Avalos, who would have turned 13 years old on May 4. Anthony’s mother and her boyfriend are charged with murder and torture in the 10-year-old’s death in June 2018.

A portrait of Anthony Avalos stands next to the Anthony Avalos Memorial Tree in Lancaster for a Celebration of Life ceremony attended by family and community members.

Maricruz Avalos, aunt to Anthony Avalos, who was allegedly tortured and killed by his mother and her boyfriend displays a T-shirt made in his honor at a Celebration of Life ceremony on Saturday in Lancaster.

LANCASTER — Family and community members gathered in Lancaster on Saturday to celebrate the life of Anthony Avalos, two days after Los Angeles County District Attorney George Gascón’s office took the death penalty off the table for the boy’s mother and her boyfriend, who are charged with murder and torture in the 10-year-old’s death.

The gathering took place at the Anthony Avalos Memorial Tree, at 43748 Challenger Way, near the apartment complex where Anthony lived the last few years of life. Anthony would have turned 13 years old on Tuesday. The tree was decorated with floral garlands and photos of Anthony with “Justice for Anthony” printed on it.

“We’re just here to remember him, talk about the good times, the old days, his laughter, his smile, just how much we miss him,” aunt Maria Barron said.

A large framed portrait of Anthony sat on an easel near the tree.

The undated photo shows the smiling boy, his brown hair clipped short military-style, wearing a blue plaid shirt with his thumbs tucked in the front pockets of his pants. Next to the photo on another easel was a set of cream-colored angels’ wings made from flowers with a white ribbon across it emblazoned with Feliz Cumpleaños, Spanish for happy birthday, in gold glitter letters.

Family members passed out bags of candy treats with a white and blue wristband printed with “We Love You Anthony Nolan and the hashtag Justice for Anthony Avalos.” The bag also included two buttons, one with a picture of Anthony and the phrase “Justicia para Anthony Avalos,” and another “Recall George Gascón” button with a picture of the district attorney.

His grandmother, Concepción Ramirez, said that she was happy to see so many people show up for her grandson, according to Anthony’s aunt, Maricruz Avalos, who translated for Ramirez.

“At the same time, she feels sad just because he’s not here to celebrate it, but she’s happy with everybody here and all the support we can get,” Ramirez said.

She also said the family is very upset with the decisions that Gascón is making.

“Anthony deserves to have justice,” Ramirez said. “If Gascón is not there to support children being abused, he shouldn’t be in office.”

“What did Anthony do?” Maricruz asked. “They’re not getting death penalty? What about Anthony? He didn’t get a second chance at life. And they’re getting basically a second chance, that’s unfair.”

She also recalled happier times taking Anthony to Chuck E. Cheese, and to the movies.

“He was very happy; he always wanted to get popcorn. He was always smiling,” Maricruz said.

Prosecutors allege that Avalos was severely tortured during the last five or six days of his life by his mother, Heather Barron, 31, and her boyfriend, Kareem Ernesto Leiva, 35. The alleged abuse included whipping the boy with a belt and a looped cord, pouring hot sauce on his face and mouth, holding him by his feet and dropping him on his head repeatedly, according to a prosecution court filing. Prosecutors announced more than a year after Anthony’s death on June 21, 2018, that they would seek the death penalty.

Maricruz and Ramirez wore matching “Super Anthony” T-shirts that included a picture of Anthony wearing a Spider-Man costume in front of an image of superheroes, plus the phrase; “You are as smart as Ironman, as strong as Thor, as fast as Flash, and as brave as Batman. You are our favorite superhero.”

“He liked everything, but mostly I think Batman and Superman,” she said.

The celebration of life also brought out attorney Brian Claypool, who represents the victim’s family. Claypool said former District Attorney Jackie Lacey spent six to eight months with a panel reviewing all of the evidence, including more than 100 photographs of Anthony, and grand jury transcripts.

“He didn’t review anything,” Claypool said of Gascón.

Claypool said Gascón also did not call Anthony’s family before he pulled the death penalty off the table.

“Gascón is using a 10-year-old boy who was tortured, sexually molested, and murdered as a pawn to promote a radical social experiment,” Claypool said.

Claypool has a $75 million lawsuit pending against the Los Angeles County Department of Children and Family Services, and Hathaway Sycamores Child and Family Services, the same agency that provided services to eight-year-old Gabriel Fernandez, who was tortured and killed by his mother and her boyfriend in 2013.

Gabriel’s mother, Pearl Sinthia Fernandez, who pleaded guilty in February 2018 to the first-degree murder and torture of her son, filed a petition for re-sentencing last month.

A Los Angeles jury found her boyfriend, Isauro Aguirre, guilty of Gabriel’s murder, and recommended that Aguirre, now 40, be sentenced to death for the boy’s killing. Aguirre is on death row.

“We’re pushing that case to hopefully get a public civil trial because we want to get all the evidence in front of the community,” Claypool said.

Family members and other guests including Deputy District Attorney Jonathan Hatami addressed the crowd beneath a rainbow-colored arch made from blue, red, orange, yellow, and green balloons with large silver letter and number balloons that spelled out “Happy B-Day Anthony 13.”

“I know that he’s watching all of us. He knows that we’re fighting hard and that we’re never going to stop,” Maria Barron said. “All these memories that I have of him will always be there, but what hurts is the memories I can no longer make with him.”

“He doesn’t deserve what he went through,” she said through tears

Her husband, Miguel, read a letter from Anthony’s father, Victor Avalos, who is in Mexico.

“Anthony, I wish I could have been there when you needed me the most, and that’s something I can never forgive myself for,” the letter said. “I miss the fact that I will never be able to tuck you in bed at night, and tell you good night and sweet dreams. But I guess now it’s you watching over me, protecting me in this journey of life. I really had high hopes that at some point in life we would reunite. I pictured carrying you on my shoulders carrying you on my shoulders at Disneyland. But if anyone were to ask me, never in a million years would I have ever pictured myself carrying you in a casket at your funeral. To my son, Anthony, if you can hear me, just know daddy loves and misses you.”

Hatami added they went through the process on Anthony’s case.

Supervisor Kathryn Barger released a statement Friday in regard to Gascón’s decision not to seek the death penalty in Anthony’s case.

“This was a horrific crime perpetrated against a young child by those who were meant to love and protect him,” she said in the statement. “Those who are responsible for his torture and murder should be held accountable and punished to the fullest extent of the law. This death shook the community and this decision by the District Attorney has not been supported by the prosecuting attorney on this case.”