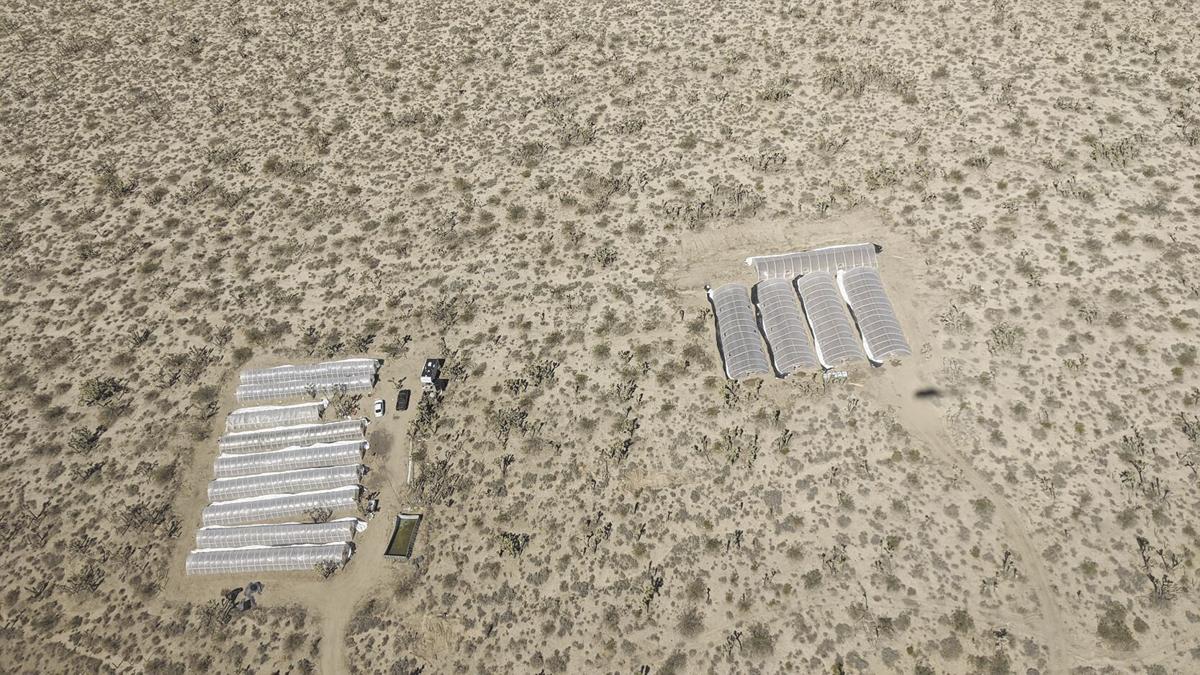 Hundreds of illegal marijuana cultivations like these mar the Antelope Valley’s desert landscape. Crimes such as human trafficking, assault, robberies, and murder have been directly associated with the cultivations. 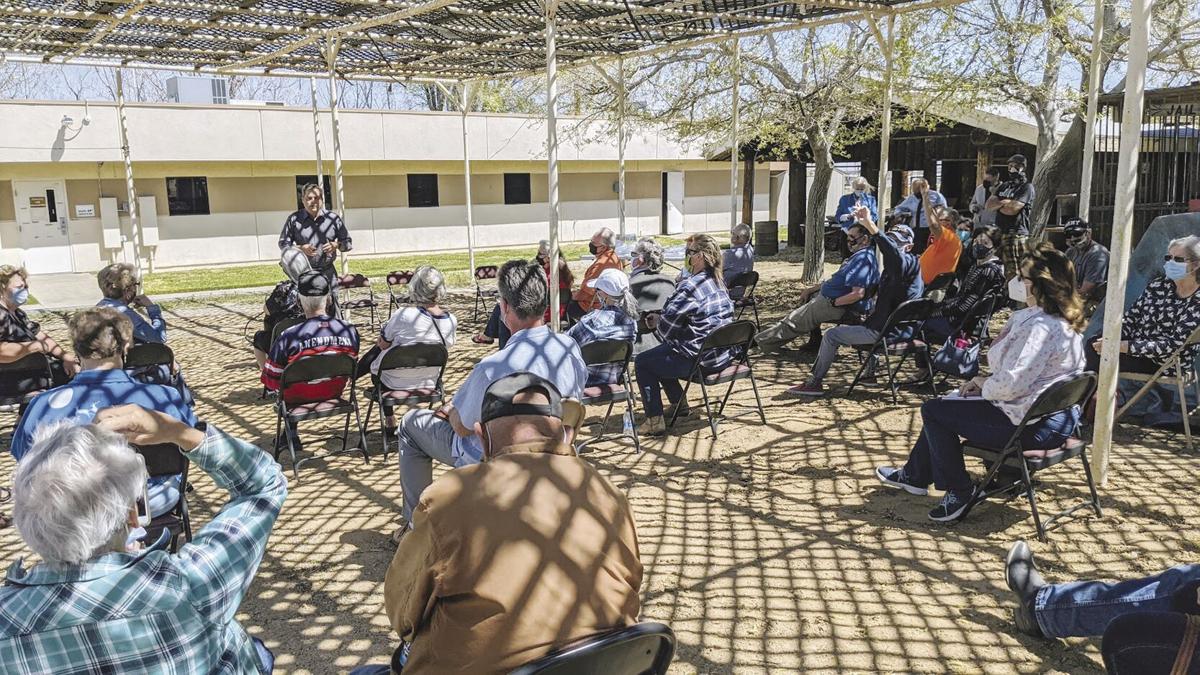 Hundreds of illegal marijuana cultivations like these mar the Antelope Valley’s desert landscape. Crimes such as human trafficking, assault, robberies, and murder have been directly associated with the cultivations.

Some operations are big; some are small. New ones pop up amid the Joshua trees and desert scrub seemingly overnight in what appears to be random spots on previously undisturbed land.

“The desert floor cultivations have been increasing each year,” a narcotics detective said.

The team has conducted aerial reconnaissance from the far east to the far west of the Antelope Valley.

“We are aware of illegal marijuana cultivations from the San Bernardino County line, the Kern County line and the Ventura County line,” the detective said.

Authorities must complete an investigation for each location to confirm an illegal marijuana cultivation exists. Afterward, they can present a request for search and seizure to a judge. Once the judge approves a search warrant, it takes a coordinated law enforcement effort to search, seize and eradicate each cultivation location.

So far this year, the team has conducted 22 search warrants, seizing 25,000 plants and 550 pounds of finished products. They made 33 arrests and seized six illegally possessed guns.

The illegal operations use undocumented workers as indentured servants. They steal water for the crops. They squat on private and publicly owned land. Out-of-town property owners rent land to illegal cultivations not knowing what is happening on their land, the detective said.

The majority of illegal operations continue to cultivate until search warrants are served. In years past, the Marijuana Eradication Team has served search warrants at locations several times. However, this is changing over time, with different agencies recognizing the problems contributed by the illegal marijuana operations.

Those problems include environmental issues, higher crime rates associated with marijuana cultivations, financial difficulties with the legitimate and legal cultivators, and a nuisance to the many residences who have marijuana cultivators next door, the detective said.

Rep. Mike Garcia, R- Santa Clarita, got a first-hand look at the illegal cultivations during an aerial reconnaissance flight last week with a narcotics detective.

He followed the helicopter tour with a town hall meeting in Pearblossom with about 50 residents from the Antelope Valley’s rural communities who repeatedly called his office with concerns about the illegal operations.

“I would not have even realized that was a problem out here had we not gotten the phone calls that we did,” Garcia told the crowd.

The aerial tour was an “eye-opener” Garcia said.

“It was heartbreaking to see, and you have my commitment we’ll start working on it,” he said.

Last year the Drug Enforcement Administration provided $400,000 through the Domestic Cannabis Eradication/Suppression program  for LA County Sheriff’s Department for deputies to work overtime to mitigate the illegal cultivations. The DEA provided $500,000 this year but per the Department of Justice deputies are limited in how many overtime hours they can work.

One resident said they have been threatened by the people who operate the illegal marijuana cultivations.

“We’re taking abuse from these people. … They have guns and nobody can do a damn thing about it,” she said.

Another woman said she is surrounded by homes but said her neighbors are pot farmers.

Garcia urged people to speak with their friends, family, and neighbors.

Garcia opposed a bill to legalize marijuana at the federal level because it did not include resources to combat illegal operations.

“I don’t care as long as it’s regulated, taxed and we keep it safe, but make that decision at the state level, not the federal government level,” Garcia said.

Garcia pledged to return and said he would work with Barger and other elected officials.

“You guys please do the same and report literally everything that you see in this regard. We’ll get through it,” Garcia said.

Supervisor Kathryn Barger is also doing something to address the community’s concerns.

The Los Angeles County Board of Supervisors on Tuesday adopted a motion by Barger to combat illegal land use in the Antelope Valley and the associated theft of water. Barger’s motion directs the Public Works director to report back in 60 days with a comprehensive plan to monitor and harden the LA County Waterworks District No. 40 infrastructure.

On Feb. 23, the Board of Supervisors unanimously adopted a motion by supervisors Barger and Hilda Solis to direct county departments to investigate and recommend enhanced enforcement efforts to address the illegal marijuana operations in the Antelope Valley.

In previous years, from 2016 and prior, the Marijuana Eradication Team had illegal marijuana cultivations in the national forest area. During that time there were approximately 15 to 20 search warrants served each year. More recently, the illegal operations have moved to the desert floor.

“Because there are significantly more areas to cultivate, the black market industry has exploded,” the detective said.

Asked what they need to combat the illegal marijuana cultivations, the detective said public awareness of the dangers and crimes associated with the cultivations.

Crimes such as human trafficking, assault, robberies and murder have been directly associated with the cultivations.

After the town hall, Garcia said the problem is worse than anyone can appreciate.

“We saw, in the helicopter, we saw hundreds, which means that there’s thousands of these things,” he said. “It’s not just about marijuana; it’s about security, it’s about cartels, it’s about illegal immigration. People who are here legally, in some cases, being held against their own will to work these farms. They’re threatening Americans; they’re ruining the environment; they’re stealing our natural resources.

“What is impressed upon me by these folks is that no one is paying attention. This, of all things, is something that we need a lot of people to pay attention to.”