NEW YORK — As the new academic year arrives, school systems across the United States are struggling to cope with the COVID-19 pandemic. Roman Catholic educators have an extra challenge — trying to forestall a relentless wave of closures of their schools that has no end in sight.

Already this year, financial and enrollment problems aggravated by the pandemic have forced the permanent closure of more than 140 Catholic schools nationwide, according to officials who oversee Catholic education in the country.

Three of the nation’s highest-ranking Catholic leaders, in a recent joint appeal, said Catholic schools “are presently facing their greatest financial crisis” and warned that hundreds more closures are likely without federal support.

“Because of economic loss and uncertainty, many families are confronting the wrenching decision to pull their children out of Catholic schools,” said New York Cardinal Timothy Dolan, Boston Cardinal Sean O’Malley and Los Angeles Archbishop José Gomez, president of the US Conference of Catholic Bishops.

They urged Congress to include funding in the next pandemic relief bill for scholarship assistance for economically disadvantaged families to use at Catholic or other private schools.

Many Catholic schools already have received substantial federal aid from the US Department of Education and from the Paycheck Protection Program, which was designed to pay wages at businesses or nonprofits impacted by the pandemic.

The pace of closures has been relentless since March. Within the past month, Catholic leaders have announced the shuttering of five schools in Newark, New Jersey, and 26 in the New York City area. Among the schools closed earlier was the Institute of Notre Dame in Baltimore, a 173-year-old girl’s high school that’s the alma mater of House Speaker Nancy Pelosi.

Several of the closures have promoted protests and petition campaigns by angry parents, and Catholic officials have been scrambling to help affected families.

The Diocese of Brooklyn’s school superintendent, Thomas Chadzutko, said the closures were unavoidable due to the pandemic’s “devastating effects” on enrollment and finances.

Parents were offered a $500 grant if their children enrolled in other Catholic schools, but many were bitter that the closures were announced with little time to make alternative school plans.

“It is a complete travesty how the Brooklyn Diocese can shut down schools within a pandemic and with less than two months’ notice,” parent Javier Cortes wrote in an online post about the closure of Queen of the Rosary Catholic Academy. “Treating children like this is NOT the Catholic thing to do!”

Also ordered closed was Nativity of Our Blessed Lady, an elementary school in the Bronx.

“I was part of the first graduating class and now I walked out of there hysterical in tears,” said Hope Wilson, who attended the school as a child and later taught there for 30 years. “It’s heartbreaking.”

In Newark, Shante McGlone Burgess was devastated by the news that St. Francis Xavier School was closing. All three of her children attended the elementary school last year, though the family is not Catholic.

“They were very welcoming there,” McGlone Burgess said. “At a public school, I don’t think my children would have gotten the same camaraderie, as well as the structure.”

St. Francis Xavier is one of many schools being closed that serve predominantly Black and Hispanic communities. Three bishops who oversee matters related to education and racial issues recently sent an appeal to US Rep. Karen Bass, chairwoman of the Congressional Black Caucus, seeking support for families of color with students in Catholic schools.

At the National Catholic Educational Association, there’s acute concern about the closures’ consequences.

“Catholic schools have a very profound impact on young people of low-income backgrounds, students of color, kids from single-parent homes,” said the NCEA’s chief innovation officer, Kevin Baxter “That makes it all the more tragic if we lose the Catholic schools that serve those populations.”

One consequence of the turmoil: increased interest in Catholic-oriented homeschooling.

Chris Sebastian, a spokesman for the Mother of Divine Grace School, said it is preparing to serve about 6,000 students in the new school year, compared with 4,800 last year.

The school, based in California but serving families across the US and overseas, offers a structured Catholic curriculum and assigns an educational consultant to work with each family that signs up.

“COVID is the primary motivator for people enrolling,” Sebastian said. “People are afraid of the pandemic and not wanting the stress of required masks.”

The Rev. Thomas Vassalotti, pastor of Queen of the Rosary Catholic Academy’s parish in New York, said numerous parents affected by that closure — and wary of switching to public schools — are expressing interest in homeschooling, perhaps in a cooperative with assistance from the parish.

For Catholic schools that are reopening, there is no national directive as to how they should handle the question of in-person classes. Decisions are being made diocese by diocese, often influenced by local and state rules.

In Los Angeles, archdiocese officials had hoped to open the new year with in-person classes. They now will have to start out with distance learning, due to an order from Gov. Gavin Newsom barring public and private schools from reopening campuses if their counties are on a monitoring list for high rates of new Coronavirus cases.

The situation is different in Dallas, where the diocese plans to open schools Sept. 2, six days before the earliest date when secular schools can start in-person classes. The diocese chose that option after Texas Attorney General Ken Paxton said religious schools were exempt from local orders delaying in-person instruction.

And in Evansville, Indiana, Catholic schools reopened Aug. 5 with a full program of in-person instruction. Schools were told to spread out desks, place students in small groups and require face coverings.

Mary Pat Donoghue, who heads the education office of the national bishops’ conference, said she expects a wide variety of reopening plans, with a common aim of getting students back in the classroom as quickly as health conditions allow. 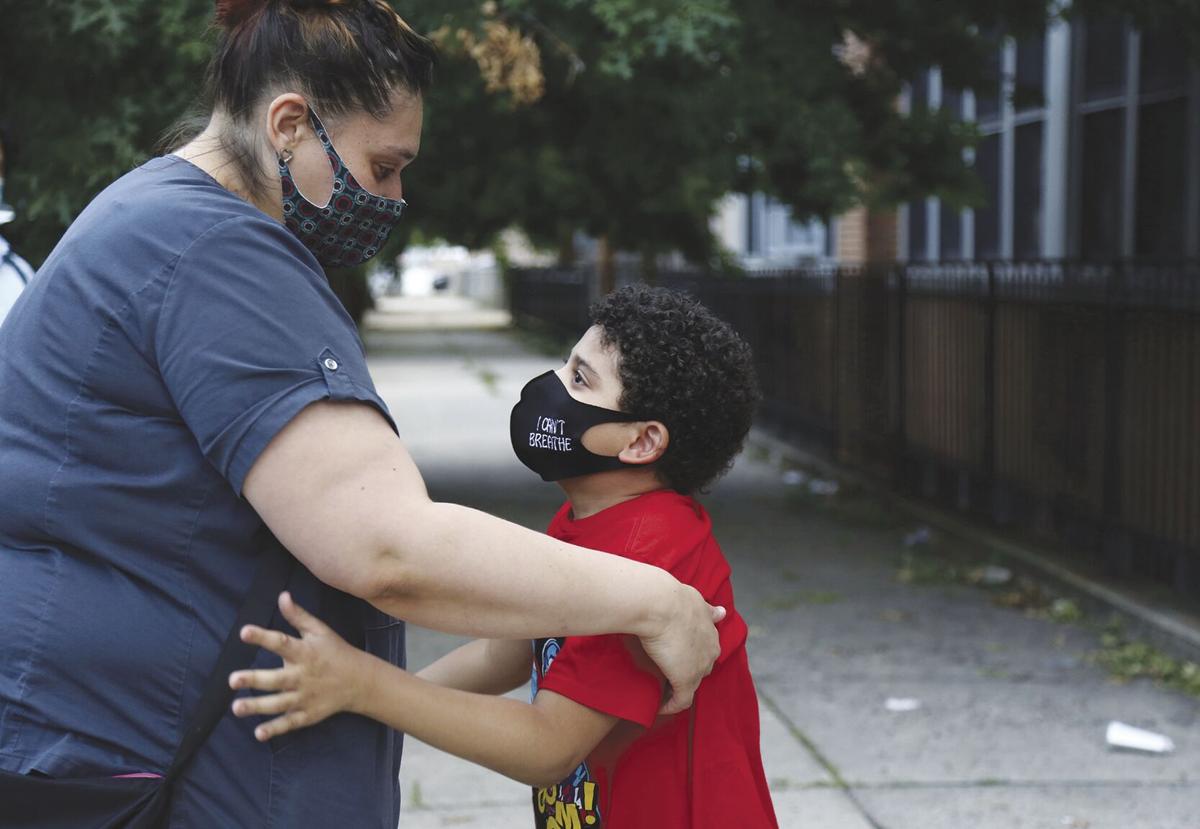 Christina Mendez leans down to hug her 7-year-old son, Elidios Kenel, after meeting with dozens of other concerned parents and students at St. Francis Xavier School in Newark, Thursday, Aug. 6, 2020. The Archdiocese of Newark announced the school's permanent closure the previous week. (AP Photo/Jessie Wardarski) 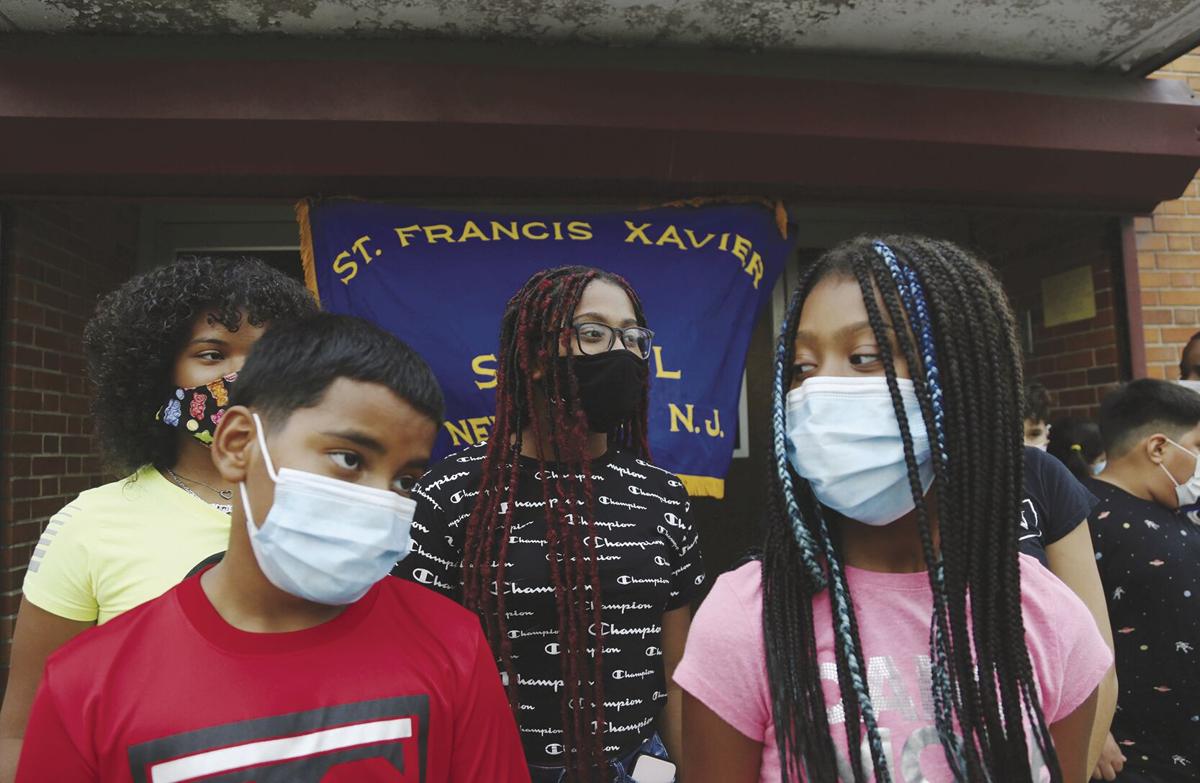 Malik Bey, 11, left, stands with his sisters in front of St. Francis Xavier School in Newark, on Thursday, Aug. 6, 2020, as parents meet to fight the school's permanent closure. "Give them a shot," said Bey's father, Malik Bey Sr. "My son has been coming here since kindergarten and he's in sixth grade now. This is what he knows, and the kids are who he knows. Let's leave them together." (AP Photo/Jessie Wardarski)

Christina Mendez leans down to hug her 7-year-old son, Elidios Kenel, after meeting with dozens of other concerned parents and students at St. Francis Xavier School in Newark, Thursday, Aug. 6, 2020. The Archdiocese of Newark announced the school's permanent closure the previous week. (AP Photo/Jessie Wardarski)

Malik Bey, 11, left, stands with his sisters in front of St. Francis Xavier School in Newark, on Thursday, Aug. 6, 2020, as parents meet to fight the school's permanent closure. "Give them a shot," said Bey's father, Malik Bey Sr. "My son has been coming here since kindergarten and he's in sixth grade now. This is what he knows, and the kids are who he knows. Let's leave them together." (AP Photo/Jessie Wardarski)

Roman Catholic educators should grow a set...as should all religions. You are being attacked by scum, with an agenda. People in other countries are "tortured" for their religious beliefs. And our pastors here fear a little jail time (which will not happen)...that makes you (pastors) a "COWARD" on a global scale. "All" churches should be opened this Sunday (inside seating during this heat wave not outside seating B.S.) All police officers should "stand down" when asked to deal with churches being opened. The Police should realize that the people that want to "defund" the police are the same DirtBags that want to keep churches closed. If a police officer was down...with no fellow officers around...a church goer would come to the rescue...in a New York minute. "Man up Pastors" and make "God" Proud.