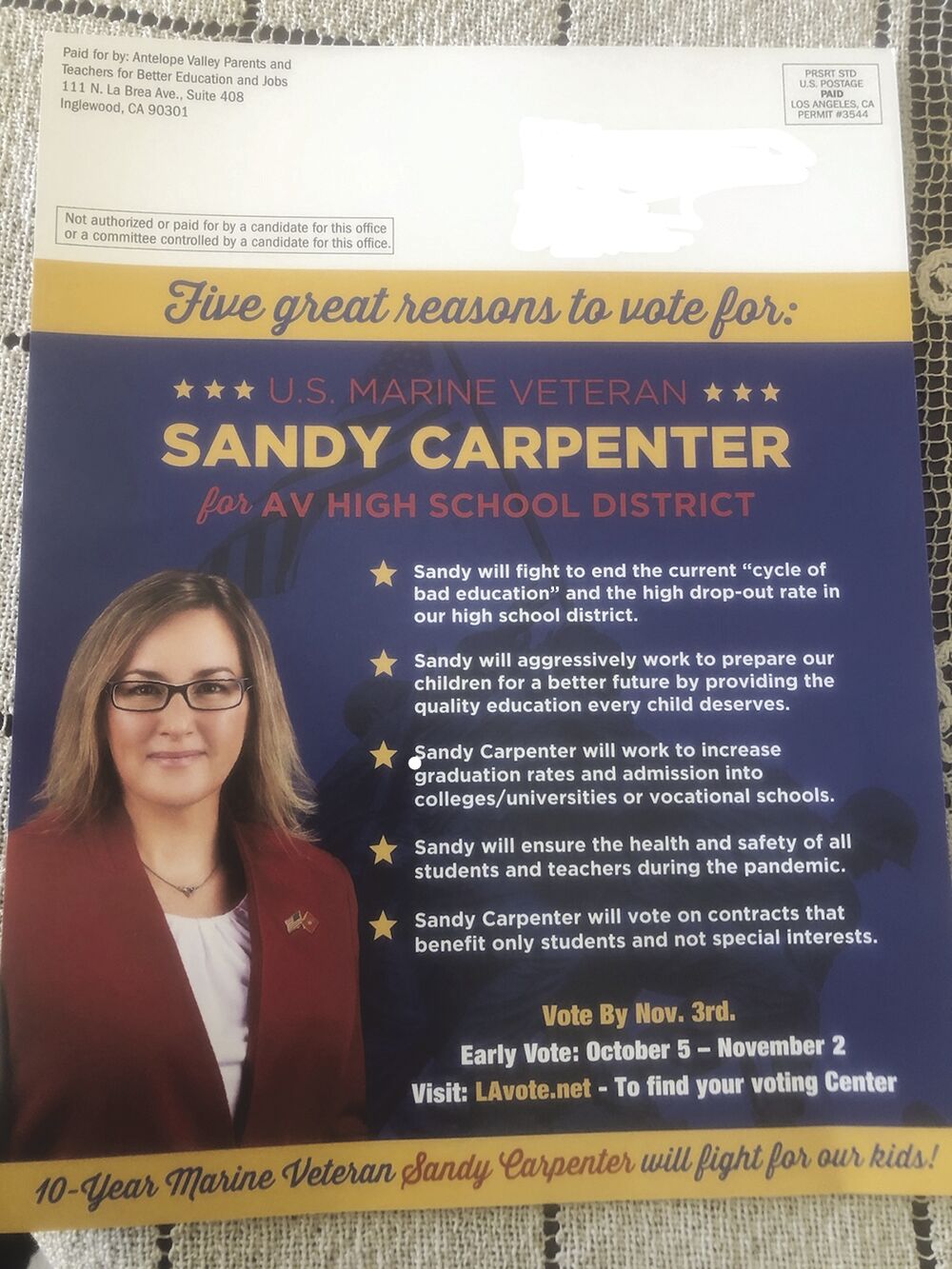 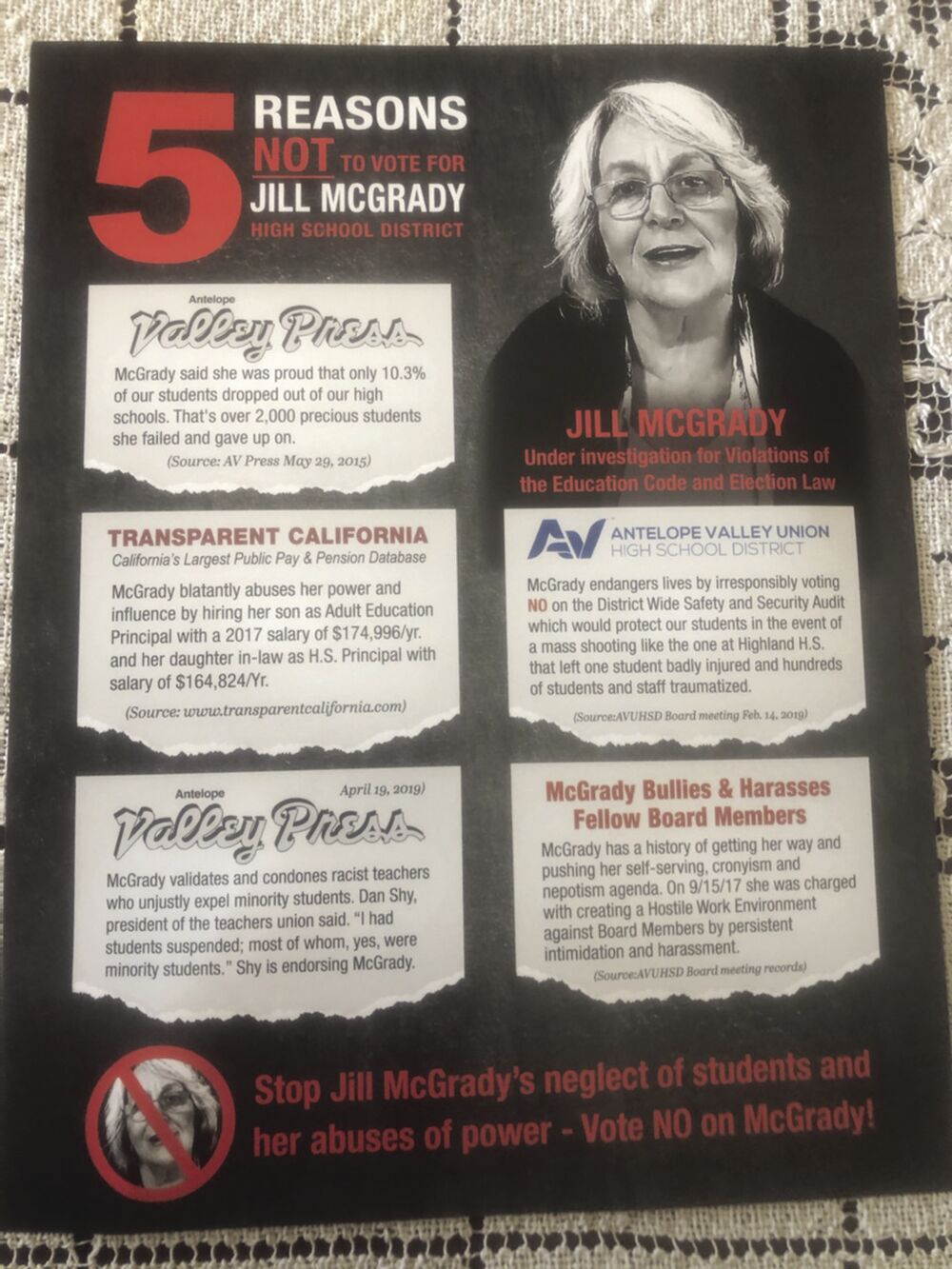 The mailer is from the same organization — Antelope Valley Parents and Teachers for Better Education and Jobs — that paid for the hit mailer against former trustee Donita Winn. Winn is running for Trustee Area No. 3. Her competition is retired judge and longtime school volunteer Dana LaMon, businessman Robert Teller and adjunct instructor Christian Green.

Antelope Valley Parents and Teachers for Better Education and Jobs is not registered with the California Secretary of State.

The address for the organization is 111 North La Brea Ave., Suite 408, in Inglewood. That is the address of Political Reporting Plus, a political consulting and reporting business run by two people: Cine D. Ivery and Michelle Moore Sanders.

The number must be printed on the mailer according to state law.

The statement appears to be a so-called “independent expenditure.” It uses a professional-looking photo of Carpenter that does not appear to be readily available via a Web search. If Carpenter provided the photo or the information used to support her candidacy, it could be a potential election violation.

Carpenter would have to report the expense on her Form 460. Carpenter did not submit any candidate financial reporting paperwork with the Los Angeles County Registrar-Recorder by the Sept. 19 deadline, according to the county.

Carpenter did not immediately return an email seeking comment. Neither did Davis.

The McGrady hit mailer landed in voters’ mailboxes this week. The mailer provides some clarity on who might be behind it — former Board member Robert “Bob” Davis.

The mailer made no mention of the third candidate in the race — Miguel Coronado. As with the Winn mailer, the McGrady side of the mailer contains inaccuracies and items taken out of context.

“It is unfortunate that some of our opponents feel the need to tell outright lies to the public in their attempt to win seats on the AVUHSD Board,” McGrady said in a statement. “I trust the public’s ability to see through those lies and vote for candidates who have our students’ best interests at heart and have proven their worth with decades of service to our district.”

The mailer cites five reasons not to vote for McGrady. The first paraphrases a McGrady quote from a May 29, 2015, Antelope Valley Press story:

“McGrady said she was proud that only 10.3% of our students dropped out of our high schools. That’s over 2,000 precious students she failed and gave up on.”

The article was Valley Press coverage of McGrady and Winn’s joint announcement about their intention to run for re-election in November 2015. McGrady won; Winn lost her seat to Davis.

“So consequently we’re lower on high school dropouts and we are very proud of that,” McGrady said at the time.

The high school district’s dropout rate of 10.3% was better than LA County and statewide statistics, which were 11.6% and 12.6%, respectively at the time, the article stated.

Both have master’s degrees and both received doctorates in Organizational Leadership in 2014.

McGrady’s son and daughter-in-law, who no longer work for the District, worked as teachers and principals for more than 20 years. McGrady was first elected to the Board in November 2011.

“ ‘I had students suspended; most of whom, yes, were minority student.’ Shy is endorsing McGrady,” the mailer said.

The April 19, 2019, Valley Press story covered a contentious meeting where the former Board majority of Davis, Victoria Ruffin and Amanda Parrell approved an open-ended contract with Los Angeles-based law firm Harris & Associates, and two open-ended actions authorizing the firm to qualify in advance a third party to investigate allegations of discrimination and disparate treatment in the suspension and expulsion of minority students and in the district’s hiring and promotional practices.

Davis, Ruffin and Parrell dismissed the legal advice by former district General Counsel Bridget Cook. They fired her less than a month later.

Shy deemed the April 18, 2019, agenda “nothing less than an attack on each and every hardworking member of AVTA,” he said at the meeting.

“Alleged discrimination and disparate treatment. Those are serious allegations and without any foundation,” Shy said at the meeting.

The mailer also accused McGrady of endangering lives “by irresponsibly voting NO on the District Wide Safety and Security Audit which would protect our students in the event of a mas shooting like the one at Highland H.S. that left one badly injured and hundreds of students and staff traumatized.

The “audit” was the lucrative contract with K12 Sec­ure, a firm started by Bruce Frank, a former co-worker of Davis who, like Davis, re­tired from the California Department of Corrections and Rehabilitation. Frank later told the Valley Press he started K12 Secure at Davis’ suggestion.

The mailer also accuses McGrady of bullying and harassing fellow Board members.

“McGrady has a history of getting her way and pushing her self-serving, cronyism and nepotism agenda. On 9/15/17 she was charged with creating a hostile work environment against Board members by persistent intimidation and harassment.’

McGrady was not charged with anything. Speaking at the Sept. 12, 2017, Board meeting McGrady said her son followed her into education as Davis’ son followed him into prison work.

The attorney’s letter went on to say that should the alleged behavior continue, the District would face liability for the alleged actions.

As with the Winn hit mailer, the McGrady mailer wrongly said McGrady is under investigation for alleged serious Education Code violations. Those allegations go back to the Sept. 12, 2019, meeting when Davis, Ruffin, and Parrell voted in closed session to initiate a personnel investigation.

Winn was informed the next day that her status as a volunteer for the high school District had been suspended pending the investigation. Winn has since been cleared and her volunteer status restored.

Davis, Ruffin and Parrell’s action appeared to be in retaliation against Winn’s support of the unsuccessful recall effort launched against them. Davis also was possibly looking forward to the Nov. 3 election and a challenge by Winn. However, Davis resigned suddenly last November. His seat has been vacant ever since.

Davis signed a contract on Sept. 16, 2019, with Armando Zatarain Investigations. Attorney John W. Harris of Harris & Associates also signed and approved the contract. Zatarain apparently never completed his investigation. Public records requests for invoices submitted by Zatarain were never filled because there were no invoices submitted.

McGrady suggested at the Oct. 24, 2019, Board meeting, when Davis, Ruffin, and Parrell voted 3-2 to ratify Zatarain’s contract, that Davis had other motives.

“You are spending taxpayer dollars to begin an investigation into Donita Winn and me that amounts to nothing more than an attempt to denigrate our names,” McGrady said. “And all of this just as you begin your campaign for re-election. Your actions tell the public exactly what this investigation is really about.”