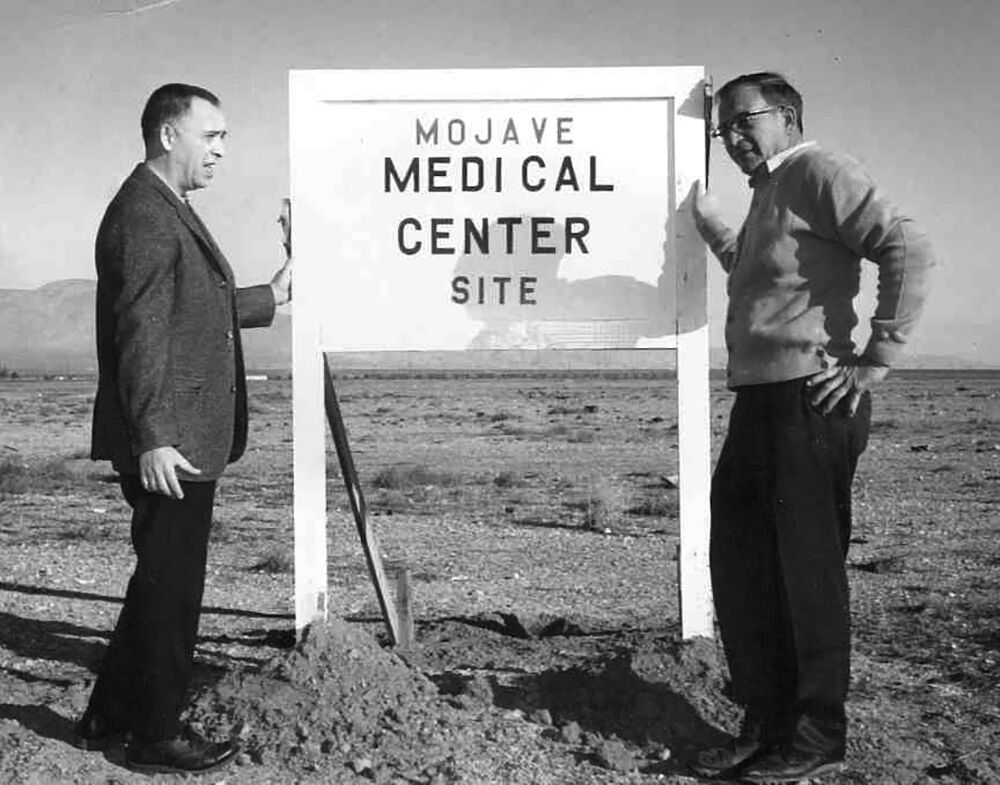 Mojave Pharmacist Carl Stone and newspaper editor Milton Smith admire a sign installed on the proposed site of Mojave’s community medical center, which was completed in 1969 and is now operated by Adventist Health.

Mojave Pharmacist Carl Stone and newspaper editor Milton Smith admire a sign installed on the proposed site of Mojave’s community medical center, which was completed in 1969 and is now operated by Adventist Health.

A check for $45,000 was presented to Adventist Healthcare on Nov. 11 to upgrade its Mojave Medical Office.

The check included a $20,000 donation from the Mojave Community Medical Center Corporation plus $25,000 from EDF Renewables.

“This investment in health and wellness services which are so critical, especially in times like these, is an ideal opportunity to support the surrounding area and bolster our long-standing relationship with the communities of Kern County, said Devon Muto, EDF Renewables director of Solar Development.

As president of the medical center corporation, which built the clinic in the late 1960s and operated it until recently, the money we presented will be used to upgrade the Mojave Medical Office. Those funds represents money remaining after dissolving the corporation.

Adventist operates the clinic which is now owned by the Mojave Air & Space Port, on whose property it is located.

“These two donations will support upgrades in safety and function of our Mojave Medical Office and will elevate healthcare in Mojave for the residents of this eastern Kern County community,” said Christina Scrivner, Adventist Health Tehachapi Valley Foundation director.

The center was constructed with funds raised by local volunteers with the help of the Sears, Roebuck Foundation.

I have always considered the medical center the best project this community ever produced, and the funds we were able to donate will build on the legacy Mojave residents began 51 years ago.

Mojave was without local healthcare service in the late 1960s with the closing of the Mojave Hospital on K Street.

Community leaders led by local pharmacist Carl Stone and Mojave Desert News co-publisher Milton Smith had learned that the Sears Foundation was offering communities like ours half the money needed to build community medical centers, a full set of building plans, and a physician, to qualifying communities.

Through Smith and Stone’s efforts, it was determined that Mojave qualified for the Sears program. They formed the non-profit corporation and kicked off what was probably the biggest community fund-raising effort in Mojave’s history.

The campaign was led by June Shaline, chief operator at the telephone company’s central office on the corner of Belshaw and M streets.

With the help of the telephone operators she managed, Shaline organized just about every type of money-raising event know to humanity.

After enduring scores of “bake sales,” Florence Smith, wife of Milt Smith, announced a “no bake” sale, which was immensely popular because all participants needed to do was donate money and not do any baking.

It turned about to be one of the most successful events of the campaign because just about every Mojave housewife was “baked out,” as my mother sighed when she heard about Florence’s suggestion.

Dr. Sam Conklin, who now lives in Tehachapi, was the first of scores of physicians, nurses, nurse-practitioners, office staff and others that have served the people of Mojave and surrounding communities at the clinic.

The nurse-practitioners played a vital role at the clinic by serving continuously for many years as scores of doctors came and went.

(Back in the 1970s, one of those physicians was arrested for throwing a typewriter at a deputy sheriff while being booked at the Mojave jail for fighting with the husband of a woman he was “courting.” The tale of his trial, which included a sleeping juror, is a story for another day).

My most memorable visit to the center was the New Year’s Day when Dr. Conklin was called away from watching a football game to repair injuries to my face resulting from a motorcycle/camera collision.

That occurred as I was using an 8mm movie camera to film a friend, Randy Jones, a psychologist, as he rode a new Kawasaki motorcycle up a steep hill on Nine Mile Hill east of Mojave.

The bike had just been acquired by Mike Riccomini, whose family owned Reno’s Café in Mojave.

As Randy roared by me his elbow struck mine, jamming the camera into my face and eye.

In those pre-cell phone days we managed to reach Dr. Sam, who now resides in Tehachapi and is also an accomplished musician.

Every time I have met with Dr. Conklin during the ensuing half-century, including a phone call last week, he has never failed to razz me about taking him away from watching his game.

The center,  a Medicare Certified Rural Health Clinic, is at 2041 Belshaw St. in Mojave next to the post office and is open daily.