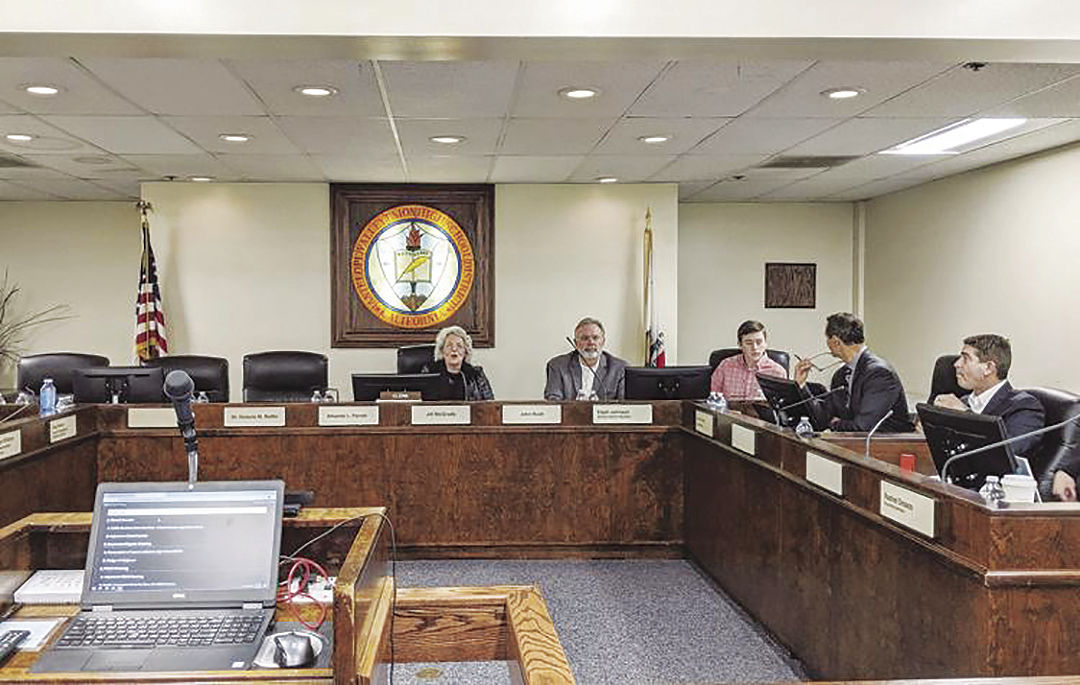 Antelope Valley Union High School District Board Clerk Jill McGrady (left), Trustee John Rush and Student Trustee Elijah Johnson sit at the dais for the Jan. 23 meeting. Board members Victoria Ruffin and Amanda Parrell did not show up for the meeting. Superintendent David Vierra (second from right) and attorney Jay Fernow were also there. 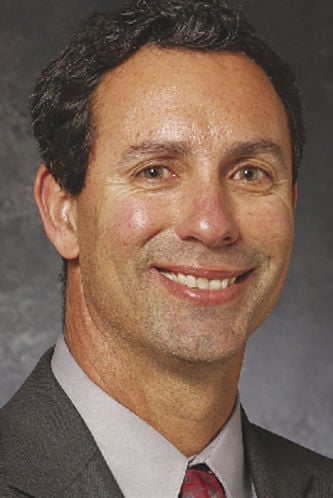 Antelope Valley Union High School District Board Clerk Jill McGrady (left), Trustee John Rush and Student Trustee Elijah Johnson sit at the dais for the Jan. 23 meeting. Board members Victoria Ruffin and Amanda Parrell did not show up for the meeting. Superintendent David Vierra (second from right) and attorney Jay Fernow were also there.

LANCASTER — Antelope Valley Union High School District Superintendent David Vierra clarified inaccuracies and defended his honor at the July 23 Board meeting in response to a speech by Board member Victoria Ruffin at the June 11 meeting.

Her 35-minute speech at the meeting touched on the worldwide demonstrations prompted by the deaths of Minneapolis man George Floyd in police custody.

“The pain and hurt of Black people has been oozing for years and an amazing unified new Civil Rights movement has begun,” Ruffin said.

Ruffin also made several allegations against the District, so much, that Board Clerk Jill McGrady asked Vierra to respond to them at the July 23 meeting.

“Dr. Ruffin spoke passionately but not always accurately for more than 30 minutes regarding challenging the status quo,” McGrady said.

She said Ruffin alleged that data over the last two years, since she has been on the Board, spotlighted academic disparities of Black and brown students, district hiring practices, student suspension and concerns of Black and brown students and illegal and unethical management contracts, as well as disparities in those the District brings on as vendors.

“Following Dr. Ruffin’s comments, I asked that Dr. Vierra review Dr. Ruffin’s remarks and allegations leveled against the District and its people and prepare a response as the comments indiscriminately attacked not only our District leadership, but our loyal and hardworking employees, McGrady said.

“Dr. Ruffin is a noted advocate for educational equality for our students of color,” he said in an approximately 20-minute response. “We have recognized the existence of inequities within the educational setting and even prior to Dr. Ruffin’s tenure on the Board, took steps to address this concern.”

For example, during the 2018-19 School Year, the District was identified by the state as needing differentiated assistance for English learners, homeless youth, foster youth, students of two or more races, low-income youth and students with disabilities.

By the 2019-2020 School Year, all student groups, save homeless youth and students with disabilities, were exited from differentiated assistance. In addition, homeless students showed improvement on the graduation rate and college and career readiness. Students with disabilities also demonstrated improvement on the California Assessment of Student Performance and Progress.

Also during the 2018-19 School Year, Antelope Valley, Eastside and Littlerock high schools were listed as comprehensive support and improvement schools. By 2019-20, all three schools were exited from the model.

Vierra also highlighted improvement in the District’s A-G completion for students who graduated, having met the requirements to get into a four-year university. In 2015, the District had an A-G rate of nearly 24%, improving to more than 40% in 2019.

Vierra noted that at a June 2019 meeting, Ruffin stated that 66% of District students have been suspended. The actual number was 8.8%.

In her June 11 comments, she also referenced “current and illegal and unethical management contracts.”

Although Ruffin did not specify the alleged illegal contract in her comments, Vierra said based on previous statements by her, including those at the May 9, 2019 Board meeting when the former Board majority fired former general counsel Bridget Cook, he assumed she meant his.

Vierra’s contract has a clause that states that if the Board unilaterally terminates his contract without cause, he is eligible for a cash settlement equal to 18 months of salary. The 18 months was consistent with state law at the time, which has since been changed to 12 months. If the Board terminates his contract without cause, he would receive a cash settlement of no more than 12 months’ salary.

“My contract is both legal and ethical,” Vierra said.

Board Bylaw 9124 says “(t)he superintendent may confer with the district’s legal counsel at his/her discretion …” The same bylaw says the Board may authorize a specific member to confer with legal counsel on behalf of the Board.”

This past year, the Board renewed its contract with longtime District firm Fagen Friedman & Fulfrost, also known as F3, and Lozano Smith and added two new law firms, Atkinson, Andelson, Loya, Rudd & Romo, as well as Harris and Associates.

During her June 11 comments, and again at the July 23 meeting, Ruffin alleged an improper relationship between Vierra and Fagen Friedman & Fulfrost attorney Jay Fernow.

Ruffin wrongly alleged the Board majority moved to remove Fagen Friedman & Fulfrost from representing the District.

Ruffin acknowledged at the May 9, 2019 meeting, that she has conferred with Harris and Associates and would continue to do so, despite not being authorized.

“Dr. Ruffin stated on June 11 meeting, that I am choosing and refusing to pay a Black vendor, Harris and Associates,” Vierra said.

Since Davis’s resignation last November, Harris and Associates has billed the District a total of $129,040.

“As I have informed Dr. Ruffin on multiple occasions, since the resignation of Mr. Davis, there is no current Board member with authority to confer with Mr. Harris,” Vierra said.

Harris and Associates has continued to invoice the District, including as recently as June.

“I have not contacted Mr. Harris, nor has the Board majority authorized any individual Board member to confer with Mr. Harris. Therefore, to pay his invoice without Board authority would be a gift of public funds,” Vierra said.

He has served as superintendent for the AV Union High School District for 18 years, he noted, working with 10 unique School Boards.

“Until December 2018, when conflict arose within our Board, the members worked in collaboration with myself, Districts leaders, certificated and classified members alike, to be the best version of ourselves in service to our community,” Vierra said.

He said his comments at the July 23 meeting were the first in a 36-year educational career in service to the community where he was raised.

“I will not allow the inexcusable behavior of one to overshadow the collective good that has been accomplished by the hardworking and dedicated individuals of this District,” Vierra said.

He concluded: “Dr. Ruffin, you have stated several times that your desire is to affect change. You described yourself as a voice of the people, an agent of change, a challenger of the status quo. I believe it is fair to say that many elected officials fashion themselves in the same regard. What differentiates you from the members who have served before you, is the manner by which you seek this change. Your disposition and behavior are counterproductive to the very change you wish to seek. You excuse your conduct under the guise of challenging the status quo, rather than aligning your vision with good governance procedures. I understand your desire to use a platform as a trustee of this Board to effectuate your agenda. However, when you espouse inaccurate information to support your mission, I’m led to question your motives and the wisdom of your decisions. This community, especially the students and staff of this District, deserve more. They deserve better. I will not continue to allow falsehoods to go unchallenged. It stops tonight.”

Victoria Ruffin is a weasel....trying to make it a race issue...most dirtbags use this weak tool. Victoria Ruffin reminds me of Donna Brazile a weasel the made the statement.."they are trying to crucify me" after the weasels was caught giving Hillary the questions that would be asked in an upcoming debate. That's why CNN (and its staff) are trash..(IMHO)