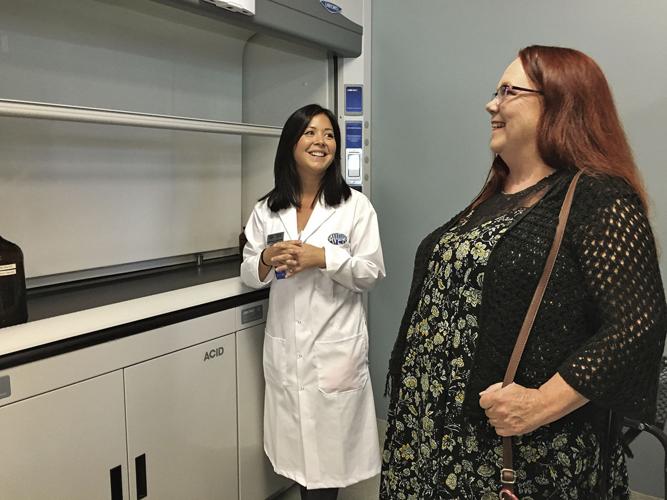 NEW DIGS — Chemist Michelle Barone, left, shows off the state-of-the-art ventilation system in the Antelope Valley-East Kern Water Agency’s new laboratory to Laura Vernetti of the Green Valley County Water District, which utilizes the lab for some of its water quality testing. 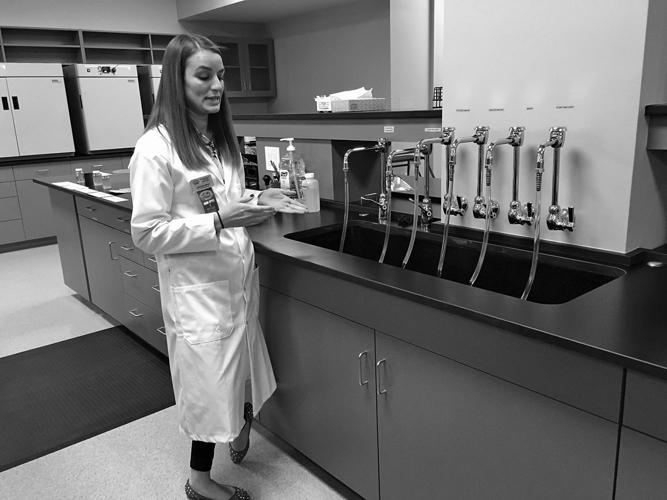 WATER TESTING — Senior lab technician Jordan Wray walks guests through the water quality testing performed at the Antelope Valley-East Kern Water Agency’s new laboratory during a tour Wednesday. These spigots bring water into the lab from various points in the water treatment process, allow the lab to test quality from start to finish.

NEW DIGS — Chemist Michelle Barone, left, shows off the state-of-the-art ventilation system in the Antelope Valley-East Kern Water Agency’s new laboratory to Laura Vernetti of the Green Valley County Water District, which utilizes the lab for some of its water quality testing.

WATER TESTING — Senior lab technician Jordan Wray walks guests through the water quality testing performed at the Antelope Valley-East Kern Water Agency’s new laboratory during a tour Wednesday. These spigots bring water into the lab from various points in the water treatment process, allow the lab to test quality from start to finish.

PALMDALE — The shiny new laboratory at the Antelope Valley-East Kern Water Agency’s headquarters offers its staff plenty of elbow room, a far cry from their cramped former facility next door.

The new space is needed as the lab’s water quality testing has in­creased significantly since the original opened in 1977, along with the addition of offering test­ing for outside customers who require water quality reports as well.

The state-of-the-art laboratory was built adjacent the existing building on Avenue N, in an environmentally friendly, LEED-certified structure that also includes a new board room, offices and room for the agency to grow.

The new facility, designed for the next 40 years, was officially dedicated Wednesday in a ceremony which included staff, local officials and AVEK customers.

AVEK is the third-largest State Water Contractor, providing water for more than 20 municipal users and others in a more than 2,300-mile area that includes portions of Los Angeles, Kern and Ventura counties.

“The Antelope Valley-East Kern Water Agency has a long and successful history of meeting the water needs of our customers, even during the recent five-year drought,” AVEK Board President Keith Dyas said. “However, we also pride ourselves in meeting stringent water quality standards as well.”

The agency constantly tests its water for quality, including bio­logical and chemical contam­inants. This workload has in­creased as the agency has begun using under­ground water banking for storage, increasing the number of samples tested and the types of testing.

The lab looks for bacteria, such as E.coli, as well as chemical byproducts from its treatment processes to remove harmful bacteria.

This monitoring not only ensures safe, clean water, but also helps to make adjustments to the treatment process.

“We communicate with each other and let each other know about water quality,” chemist Michelle Barone said about their relationship with those operating the adjacent treatment plant.

For example, the lab looks at the total organic carbon in a water sample. The more that is found, the greater amount of by­­products from the dis­infection that are produced.

“It’s quite a service for the Antelope Valley,” he said, with a growing need for testing as state requirements change. With the local laboratory service, customers do not have to send samples to labs outside the Valley.

The new lab was designed from the beginning with consideration for this testing for outside cus­tomers, something lacking in the original building which was intended only for the agency’s own workload. This meant customers had to work their way through offices to get to the lab, Lab Director Justin Livesay said.

The new lab has a dedicated parking area and entrance into a small lobby outside the lab itself for such customers, he said.

This consideration also extended to moving into the new facility, which was accomplished over a weekend in early August, avoiding closing at all during regular business hours.

The larger size, with more room to work and state-of-the-art systems, “definitely makes our lives much easier,” Livesay said.

The agency began looking to expand about five years ago, during a time favorable for construction, Chisam said.

The driving factor was the larger, more modern lab, but it was also seen as an opportunity to position the agency for growth for the next 40 years, he said.

Director Justin Lane noted during the dedication that his father, who served on the same board for some 40 years, was on hand for the dedication of the original building.

“It’s a great honor to carry on the legacy of this agency,” he said.

To share your opinion on this article or any other article, write a letter to the editor and email it to editor@avpress.com or mail it to Letters to the Editor, PO Box 4050, Palmdale, CA 93590-4050.