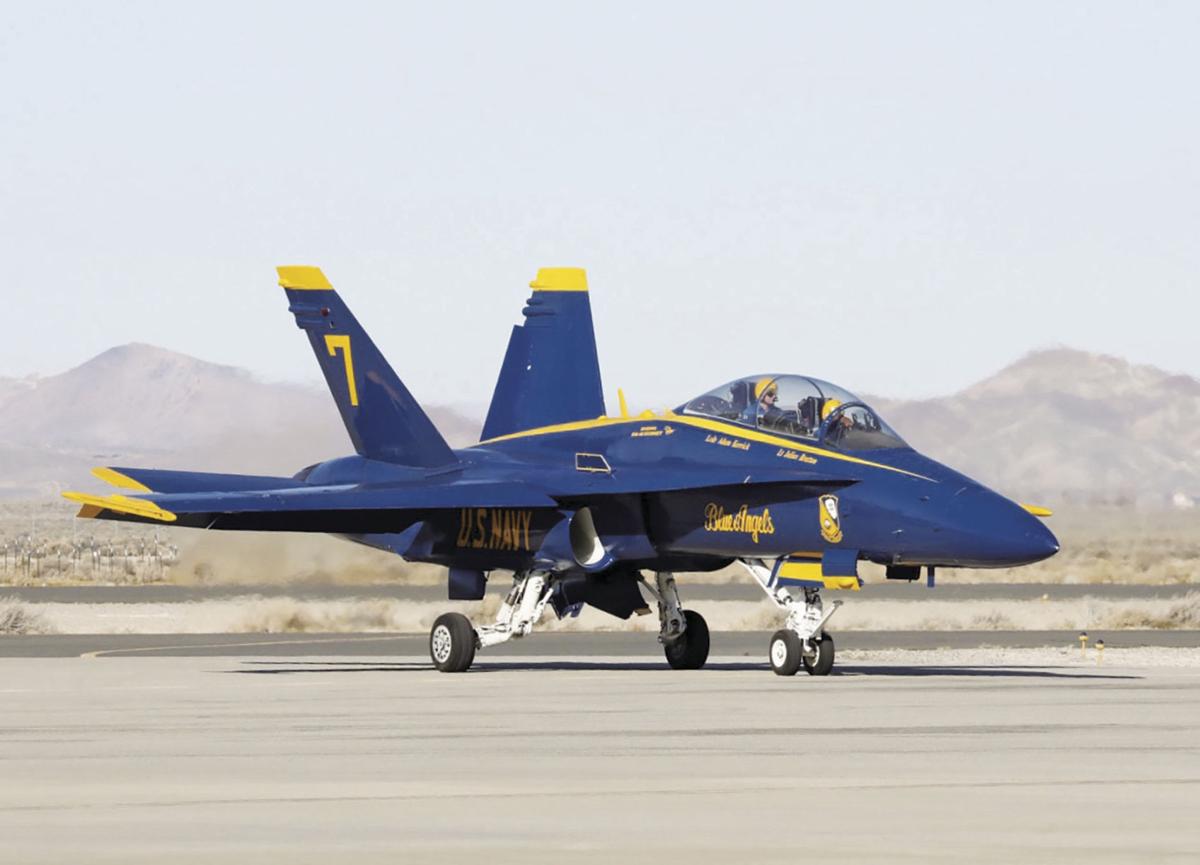 The Blue Angels flew over General William J. Fox Airfield on Tuesday afternoon, prior to a press conference announcing the Los Angeles County Air Show March 21 and 22 at the Lancaster airfield. 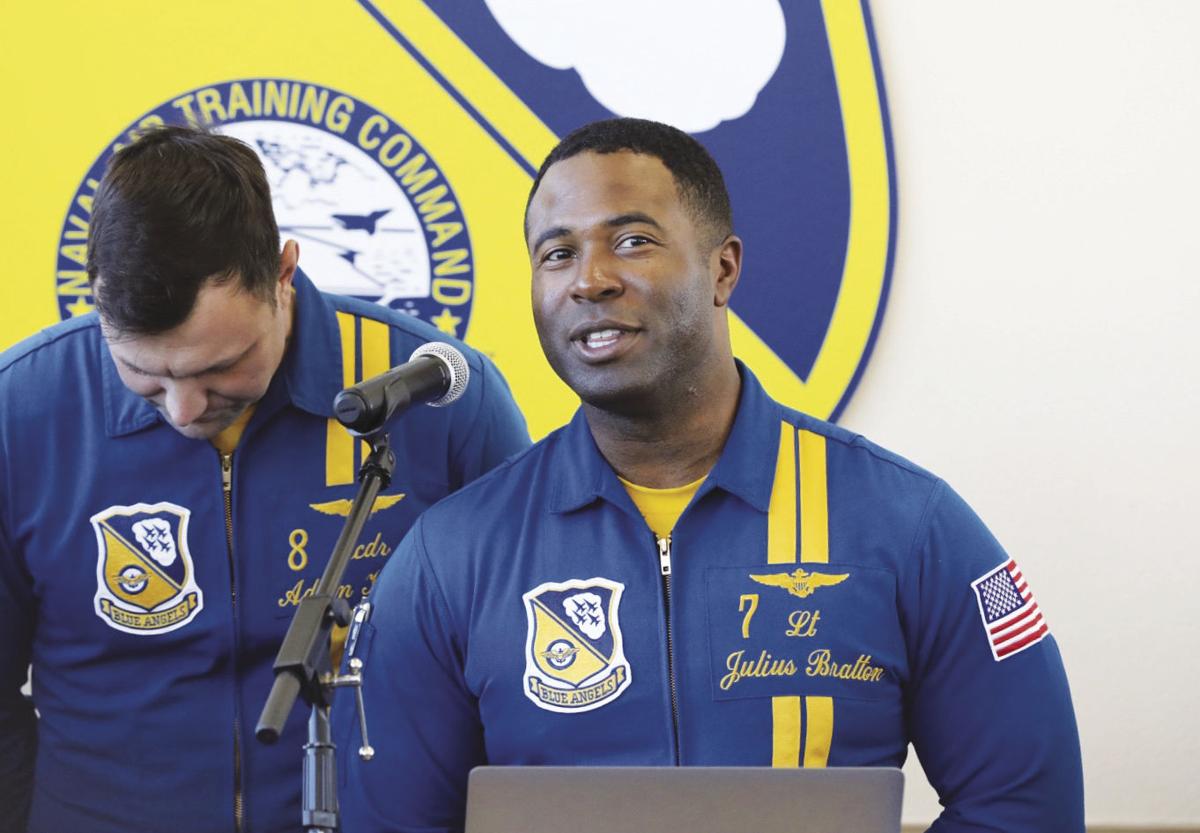 The Blue Angels flew over General William J. Fox Airfield on Tuesday afternoon, prior to a press conference announcing the Los Angeles County Air Show March 21 and 22 at the Lancaster airfield.

LANCASTER — The distinctive blue and gold F/A-18 fighter jet from the U.S. Navy’s Blue Angels aerial demonstration team arrived at Gen. William J. Fox Field Tuesday afternoon, after a thrilling fly-by to herald the return of the Los Angeles County Air Show this March, after a one year hiatus.

The popular precision aerial demonstration team was featured in the inaugural air show in 2014 and again in 2016. They will return for a third time at the March 21 and 22 air show.

“I’m looking forward to the air show in March,” events coordinator Lt. Cmdr. Adam Kerrick said. “It will be our first air show on the road.”

Lt. Julius Bratton will serve as narrator for the flight demonstration.

“We love this Southern California weather,” he said. “You guys can expect to see the epitome of teamwork; we’re working on that right now down in El Centro.”

“It’s been a privilege to welcome back the Blue Angels,” Termeer said. “And I’ve been told this show is going to be the best and greatest ever.”

The L.A. County Air Show has the largest STEM expo in the air show industry.

Termeer extended Barger’s thanks to the Air Show committee, the partnerships with Edwards Air Force Base and the volunteers who make it happen because it bolsters the local economy.

“We are very proud to be the title sponsor for the L.A. County Air Show,” Jack O’Banion, vice president for Strategy & Customer Requirements for Lockheed Martin’s Skunk Works said. “We’re very proud to call the Aerospace Valley our home.”

“We hope to inspire through STEM, the next generation out there that are interested in seeing their careers take off,” O’Banion said.

In addition to the Blue Angels, the other headliners include the U.S. Air Force F-22 Raptor demonstration team and Tora! Tora! Tora!, a popular performance at previous air shows, will return with its recreation of the Dec. 7, 1941 attack on Pearl Harbor.

The show uses pyrotechnic effects simulating explosions from the aerial bombardment, as well as a soundtrack filled with air raid sirens and the sounds of machine gun fire and the replica aircraft diving and swooping past. Spectators get a taste of the sights, sounds and smells of the battle that day.

“We have another headliner that’s going to be super exciting this year,” Los Angeles County Air Show Board President Mike VanKirk said.

He said they will be able to announce the performer in a couple of weeks, once it is official.

Other performers returning to the skies above Fox Field include Rob Harrison, known as the Tumbling Bear and Vicky Benzing in her bright red Stearman biplane.

Additional performers will include pilot Jason Somes in a MiG-17 and the comic antics of Greg Koontz and the Alabama Boys, culminating in landing a small plane on a moving truck.

“The STEM is continuing to grow,” VanKirk said. “Our partnership with Edwards is only going to grow the activities that we have with STEM.”

The Heroes and Legends history panels will include presentations on the F-22 and U-2.

The sixth L.A. County Air Show in March, will be one of two in the Antelope Valley this year. A second air show is planned at Edwards AFB in October, which will feature the U.S. Air Force Thunderbirds.

New this year, is preferred and premium seating along the show center. Children 15 and younger will get in for free. Military veterans and spectators 65 and older will also get in for free.

General admission tickets for the L.A. County Air Show cost $20 for those ages 16 and older.

Premium box seating, located directly on the flight line, is available for $45, with children ages three and younger admitted for free.

Flight Line Club tickets for the Saturday show are available for adults for $150 and $135 for Sunday.

The Flight Line Club tickets for children ages four to 12 are $85 for the Saturday show and $75 for Sunday; those age 3 and younger are admitted free.

Parking vouchers are available for purchase online for $10. The same parking fee applies at the event but is cash-only.