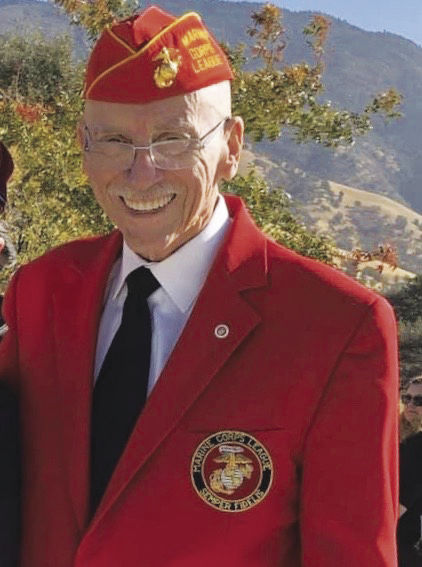 The first time I met Jerry Lawrence was about 15 years ago, at the William J. “Pete” Knight American Heroes dinner, an event in support of Boy Scouts.

One of the key awards was named for Justin Wotasik, the Eagle Scout from Palmdale, who gave his life in the line of duty in 1998, as an Air Force “PJ” pararescue commando.

Jerry was among veterans recognized, along with Lew Shoemaker, who waded ashore with the “Big Red One” on D-Day.

Honoring veterans was Scout mom Julie Norris Wotasik’s project. The Norris-Wotasik family had five Eagle Scouts in their brood, including their hero son.

Jerry, a Marine during the earliest stage of our Southeast Asia involvement, was close-mouthed about his service. Years later, I found out why, and it was harrowing. His service actually preceded America’s official involvement in the Vietnam War.

We lost Jerry, sometime between Sunday night and Monday morning. He was 80, and had been in deteriorating health for months. He refused to go to the emergency room, not out of fear, but because he would not leave his beloved while she was also vulnerable. He died peacefully, in his sleep, but never gave up the fight for life, or to do what is right.

Jerry innovated the “You Are Not Forgotten” hospice program for veterans in end-of-life. Working with hospice pro Lori Carlton Mowry, a licensed clinical social worker, he sought out veterans of military service at end-of-life.

He coordinated recognition ceremonies for the veteran, including the veteran’s family. In addition to a formal certificate of recognition of their service, in whatever branch or era of service, he brought in military regulars, non-commissioned officers and officers — career people. The veterans service and awards would be noted. Respect by hand salute was given and sometimes refreshments were served.

Jerry partnered on a quest to find our vanishing World War II comrades — and the quest succeeded. Among those honored were Charles “Charley” Rader, a top turret gunner awarded the Silver Star for helping to save his stricken B-17 Flying Fortress and the entire crew. The recent commander at Edwards AFB, Brig. Gen. E. John “Dragon” Teichert attended that one, and cut the Army Air Corps cake and served it to Sgt. First Class Rader.

Also recognized by Jerry’s “You Are Not Forgotten” project, were two more D-Day veterans, paratroopers John Humphrey of the 82nd Airborne Division and Henry Ochsner of the 101st Airborne Division.

At each of those get-togethers for WWII Airborne troopers, Jerry brought in Staff Sgts. Chase Berry and Eugenio Eufragio, both of them 82nd Airborne Division veterans of Afghanistan. Troopers Humphrey and Ochsner partied and imparted generational knowledge to troopers young enough to be their grandchildren.

Now, Jerry has joined their long, gray line. In addition to those history-makers, he honored dozens of other veterans facing that undiscovered country from which no one hath returned, to paraphrase the Bard.

We are in “safer at home” mode because of the COVID-19 pandemic. Our Marine vet brother Jerry left us so quickly that we never had the chance to honor him in the way he honored so many others. This is love and death in the time of the Coronavirus.

Hundreds of his brothers and sisters in the veteran community are sad about this, amid all the pandemic’s sadness and anxiety. We are social creatures and it is difficult to not be able to reach out and touch each other.

One night, when a group of us were assisting at a veterans fundraiser hosted by Dr. Rick Garrison at the Lancaster Performing Arts Center, we got word that a brother Marine was seriously injured in a motorcycle accident. Jerry stayed by the local Marine’s hospital bedside until he was released.

I spoke on the phone with his son Matt, who Jerry was unabashedly proud of. He is an assistant attorney general in Maryland. When the cloud of the Coronavirus lifts, as it inevitably will, a memorial tribute is planned for Jerry Lawrence.

Brothers and sisters in service, and also community volunteers and healthcare workers who knew Jerry called in, distraught, in tears.

“He was like a grandfather to me,” Katherine Letterman, with Bombshell Betty’s Calendar for Veterans, said.

Jerry served as a vice commander with Marine Corps League Detachment 930 and was a regular and steadying presence are the Antelope Valley College Veterans Resource Center, where student vets knew and loved him as “grandpa.”

He volunteered with Vets4veterans, Point Man Antelope Valley, Coffee4Vets, AV Wall and Bombshell Betty’s Calendar for Vets. Jerry always gave more than he got. This pandemic will lift and we will memorialize him appropriately. Semper Fi, brother.

Dennis Anderson is a licensed clinical social worker at High Desert Medical Group. As a former Valley Press editor, he deployed to Iraq with a local National Guard unit. He specializes in veterans and community mental issues.