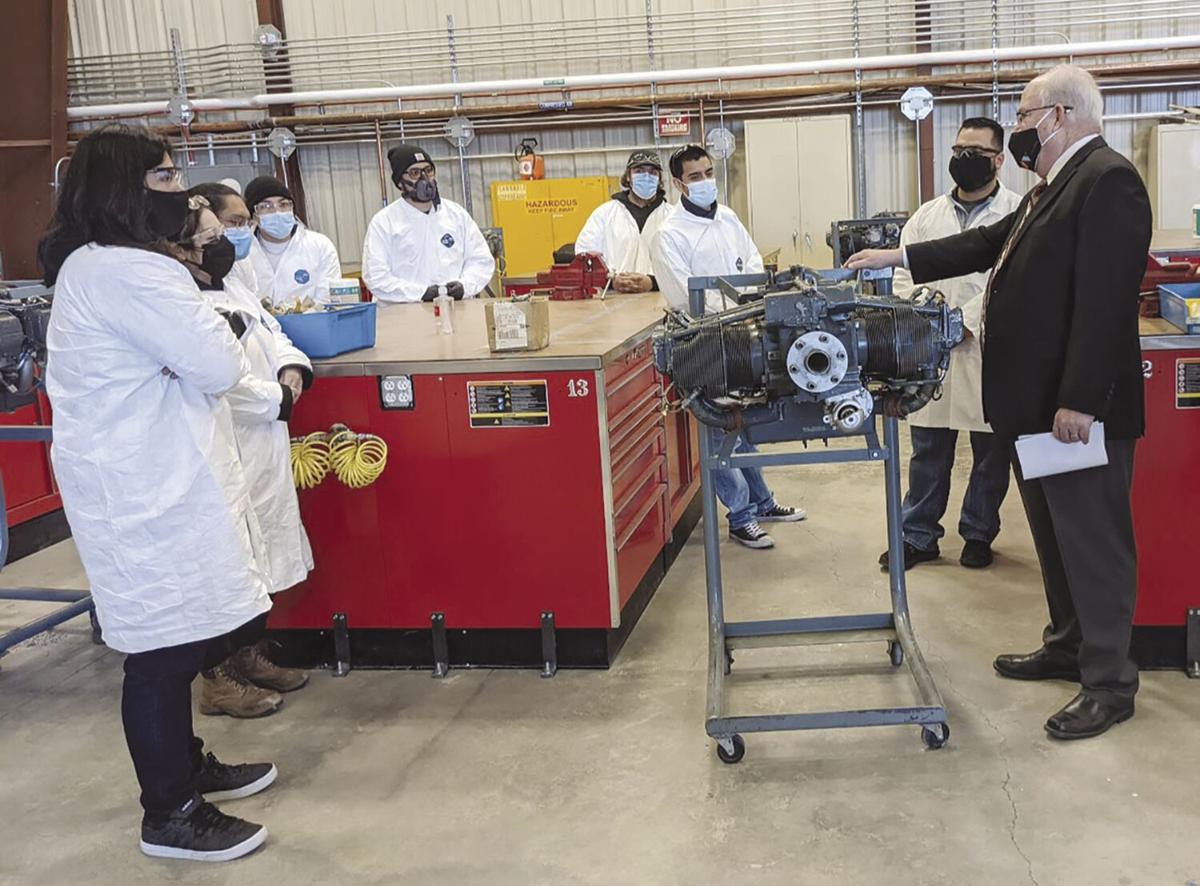 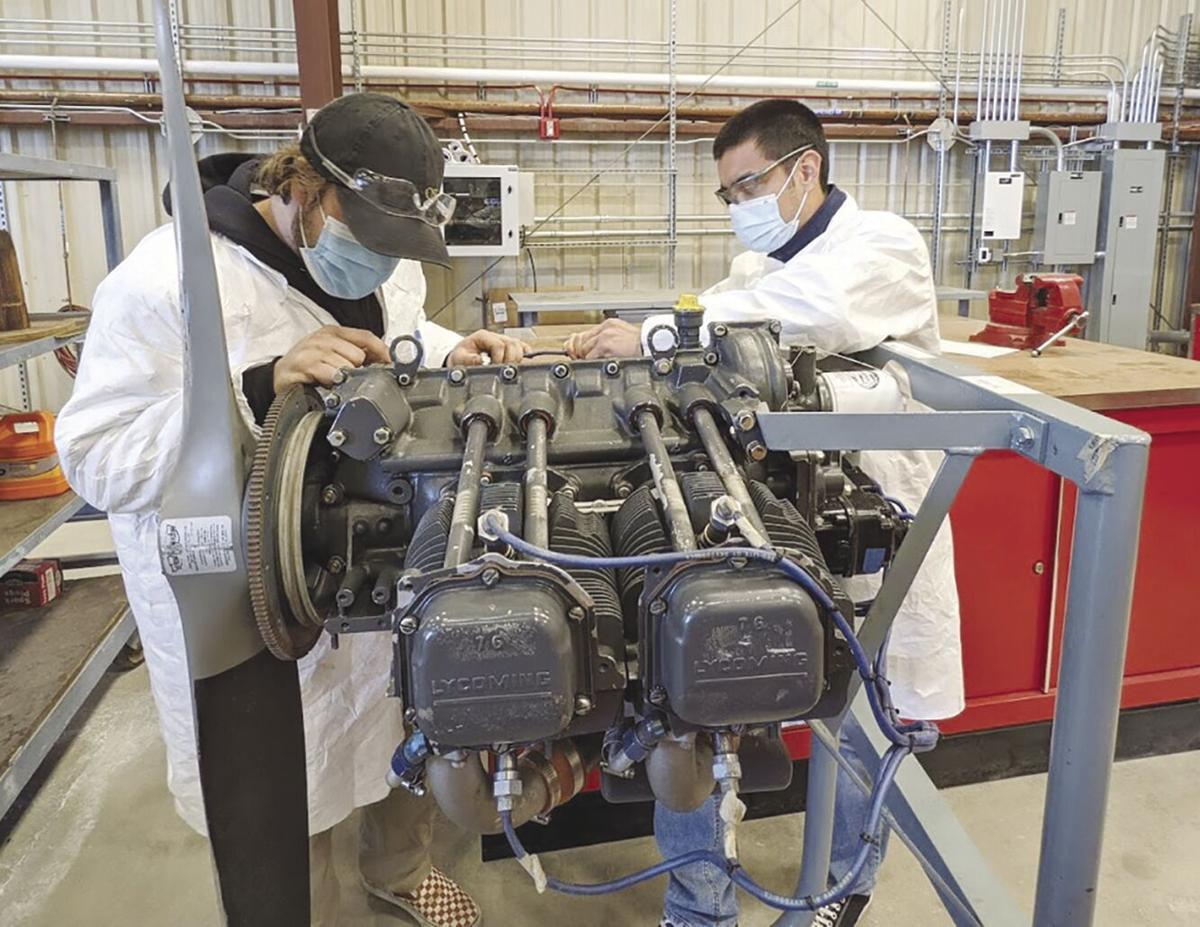 LANCASTER — Antelope Valley College officially opened its aerospace teaching facility at Fox Field on Friday with an outdoor ceremony near the 10,000 square-foot hangar, composites lab, computer lab, and classroom and office space used for the program.

AV College is the only community college in California to offer this type of facility for hands-on learning.

AV College’s aerospace certificated programs began more than 20 years ago with the Aeronautical and Aviation Technology, or AERO, Program. The program, approved by the FAA, is designed for students who are interested in working on US registered aircraft and continues to be a launch paid for students who succeed in aerospace careers.

Fox Field was the original location for the college’s aerospace program in the late 1980s. It moved to a 44,000 square foot facility at Plant 42 in 2000 with Swiss Air. Aviation took a downturn after 9/11, and the program returned to Fox Field with hangar and storage space at Barnes Aviation.

“We have been able to develop it; it looks considerably different than it was except for the hangar,” Knudson said. “We have state-of-the-art classrooms right next to us, a composites lab with computers and the standard classrooms and offices for faculty which they didn’t have before.”

The former facility filled up with dust each time the wind blew. With about 24 or 27 students on computers, instruction stopped due to the dust in the building, which is incompatible with computers.

“We’ve been able to build this facility and it is set and ready to go to serve industry for decades into the future,” Knudson said. “And it is state of the art, it truly is, and will continue to grow that way.”

Former student April Roberts, who graduated in 2016, works for Northrop Grumman. Roberts worked in the aviation industry for more than a decade before she started the AV College AERO program.

“I now work as a flight inspector with Northrop Grumann, a position I believe I wouldn’t have had a chance of getting without the experience and knowledge I gained here,” Roberts said.

Assemblyman Tom Lackey, R-Palmdale, was one of several dignitaries at the event who presented certificates of recognition to Knudson.

“Many of these people that are going to be in these programs are struggling, and right now all they need is opportunity, and this is providing that opportunity,” Lackey said.

AV College is also one of the few community colleges in the United States to offer composites fabrication and repair through an eight-week program in Aircraft Fabrication and Assembly. The AFAB program allows students to interview with aerospace company Northrop Grumman and immediately start earning more than $25 an hour.

“To date over five years we’ve graduated over 2,000 of these young people,” Knudson said.

Of those students, 30 were homeless when they started. Most were low-income and minority students.

“Of that 2,000 we have a 90% completion rate and a 94% placement rate and it leads the state in career technical education programs, and employment following completion,” Knudson said.

“This is not the end; this is just the beginning,” said Maria Clinton, interim dean for Career Technical Education. “This one further step in the direction we want to go. As long as we continue on with our partnership and we never lose focus of the main goal and that is our students. We need to prepare our students to have a life and a future for not only themselves but for their children, and their children.”

Knudson also praised the college’s partnership with the City of Palmdale, home to the AV College Palmdale Center on Palmdale Boulevard.

“This is not only putting us on the map,” Hofbauer said, adding the 2,000 graduates deserves another round of applause.

“That’s 2,000 people that are working with substantial paychecks and careers that the case of a number of them were homeless before they started that,” Hofbauer said.

Knudson said the college also has a good partnership with the City of Lancaster.

“This program is so unique, cultivated by our local community needs, it fulfills the never-ending need for highly skilled aviation professionals in our Valley,” Dorris said. “This program benefits both employers and students who go on to work in our local aeronautic and aerospace industry.”