“Poolside Fantasy,” by Sophia Mavrolas, was the winning entry in the City of Palmdale’s Public Art Committee mural competition. The mural, which Mavrolas said “is meant to reflect a sense of calmness and peacefulness that people want when they visit a public area,” will be on display at Courson Park pool. 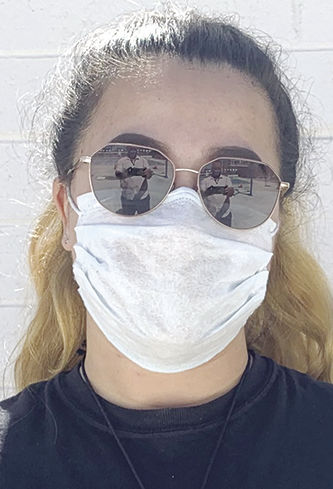 “Poolside Fantasy,” by Sophia Mavrolas, was the winning entry in the City of Palmdale’s Public Art Committee mural competition. The mural, which Mavrolas said “is meant to reflect a sense of calmness and peacefulness that people want when they visit a public area,” will be on display at Courson Park pool.

PALMDALE — A splashy new mural will soon grace the wall at the Courson Park Pool, thanks to the winning design by artist Sophia Mavrolas, whose “Poolside Fantasy” was selected from 23 submissions in the mural competition presented by the city’s Public Art Committee.

The mural depicts a mermaid with her eyes closed and relaxing in the Courson Pool, her face breaching the surface. Around her are a handful of pool toys, from a donut raft to a rubber ducky.

“My piece is meant to reflect a sense of calmness and peacefulness that people want when they visit a public area,” Mavrolas said. “My work always incorporates themes of fantasy as well, and I thought a mermaid spending time in the public pool would be just the right touch for families visiting the Courson Park Pool.”

The mural is the icing on the cake of the refurbished pool area and the revitalized Courson Park, the city’s oldest, located near the civic center at 10th Street East and Avenue Q-12.

Named for Melville Courson, the city’s first unofficial mayor, the park and its pool were built by Los Angeles County in 1949, 13 years before Palmdale was made a city.

An effort to refurbish and revitalize the park and its pool began in early 2018, with the park work completed a year ago.

The pool took somewhat longer, and is making its debut this summer, albeit with limited programs thanks to the COVID-19 pandemic safety precautions.

With the addition of the public art mural, the transformation is complete.

“The contest was a huge success with 23 designs submitted with a variety of styles and approaches, which made the judging extremely difficult,” Palmdale’s Public Art Coordinator George Davis said. “It came down to three outstanding finalists — Nuri Amanatullah, Douglas Strom and Sophia Mavrolas — whose submissions were each well designed and executed, and made a specific impression that would positively impact the pool grounds if selected.”

Installation of the mural is underway and should be completed by mid-August. A public unveiling will be announced at a date to be determined.

“On behalf of the City of Palmdale, I would like to express a deep gratitude for the artists who participated in this competition and spent time preparing their submission,” Mayor Steve Hofbauer said. “Special congratulations to Sophia. We are excited to see her mural design come to life and brighten the Courson Park Pool area for all to enjoy.”