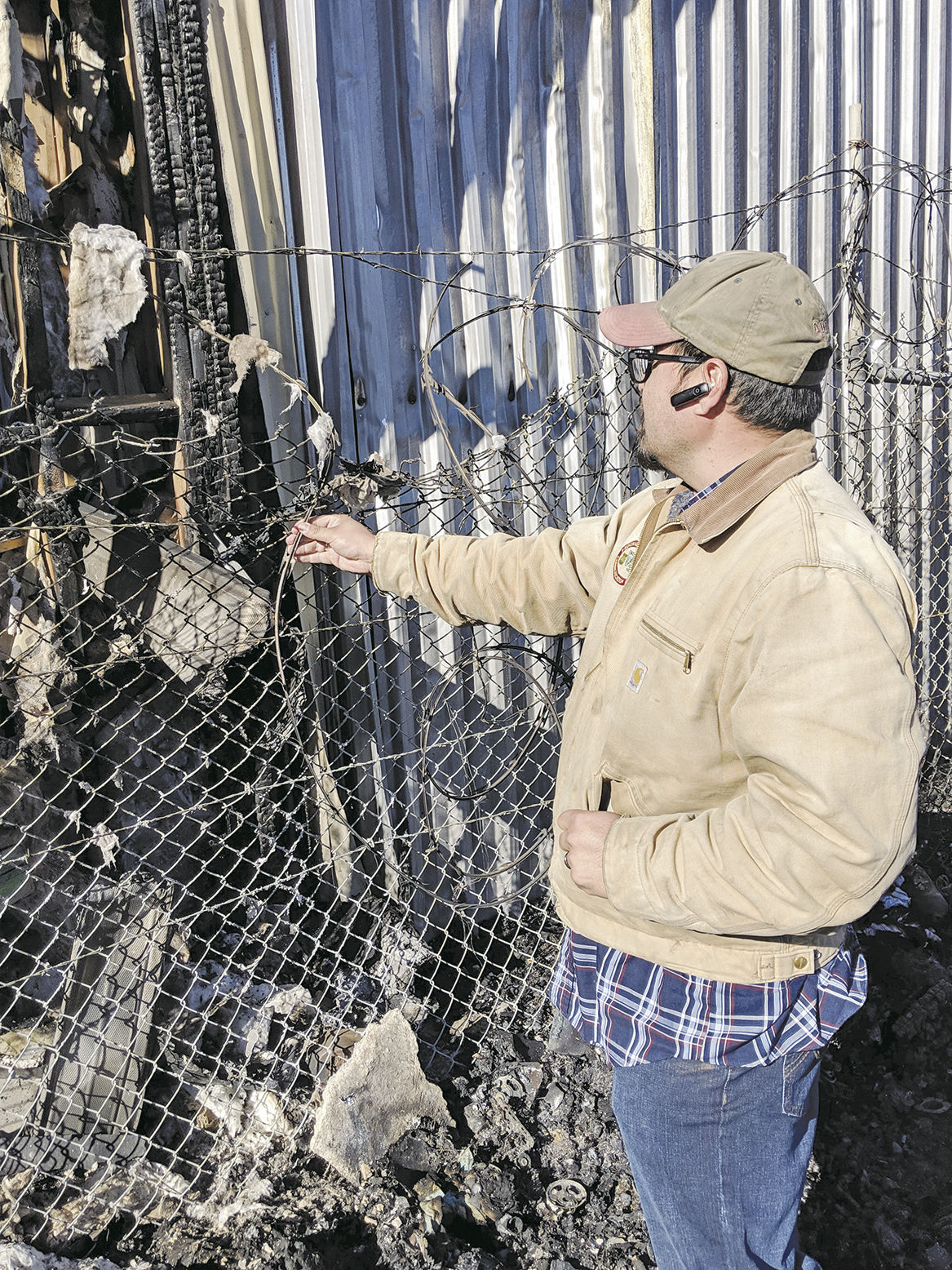 DAMAGE ASSESSMENT — Adam Sauceda, owner of High Desert Collectors on Sixth Street East in Palmdale, examines damage caused Thursday in a fire that started in a homeless emcampment behind the business. 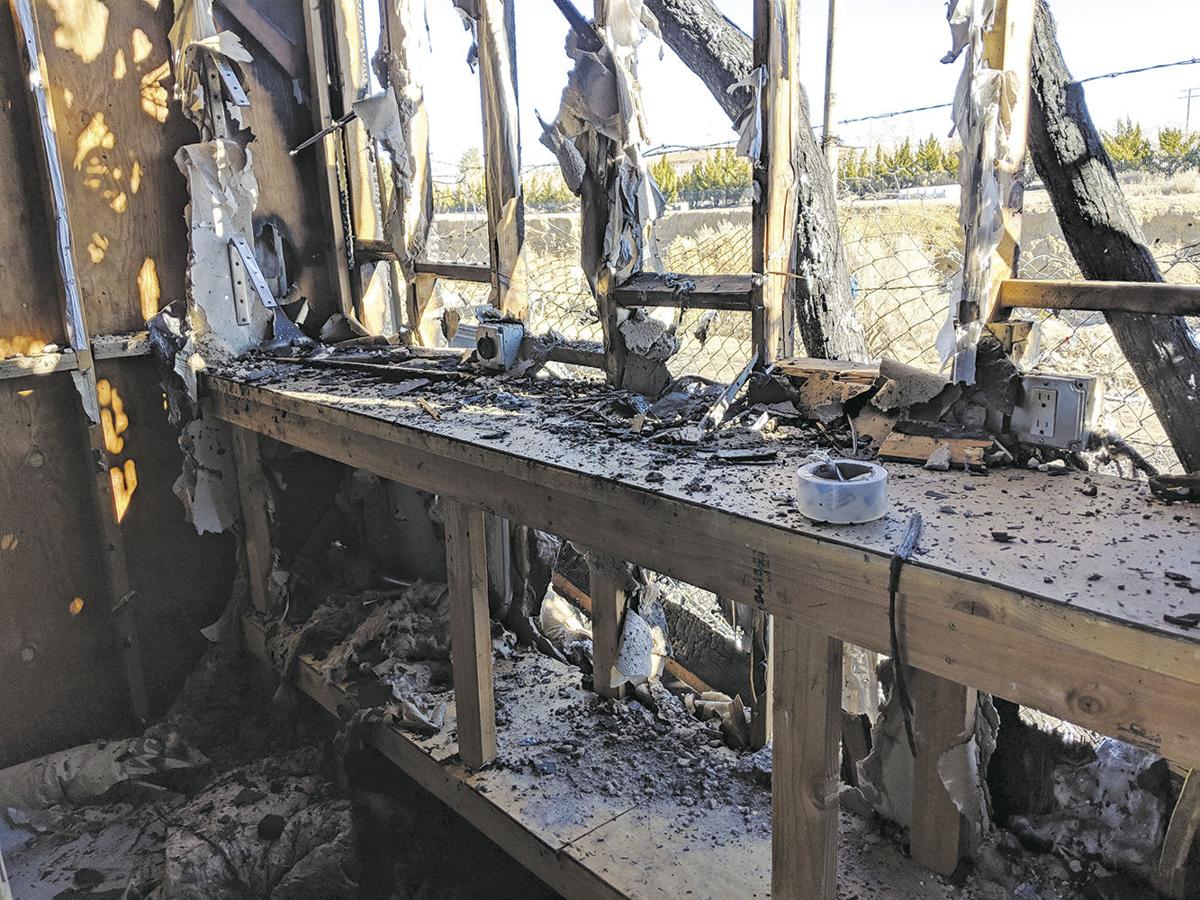 LEFT IN RUINS — About $50,000 in damage was caused to High Desert Collectors on Sixth Street East in Palmdale after a fire started in a homeless encampment behind the business.

DAMAGE ASSESSMENT — Adam Sauceda, owner of High Desert Collectors on Sixth Street East in Palmdale, examines damage caused Thursday in a fire that started in a homeless emcampment behind the business.

LEFT IN RUINS — About $50,000 in damage was caused to High Desert Collectors on Sixth Street East in Palmdale after a fire started in a homeless encampment behind the business.

PALMDALE — A fire that started in a homeless encampment behind a business on Sixth Street East south of Palmdale Boulevard caused more than $50,000 dam­age, according to business owner Adam Sauceda.

A light trail of white smoke be­hind one of the buildings on Sau­ceda’s property can be seen in video security footage. The view of the fire is partially obscured by an outbuilding, but two or three peop­le can be seen trying to move tarps or tents near the smoke, possibly in an effort to extinguish the blaze, or to save their belongings. The cloud of white smoke grows thick­er as the flames can be seen. The smoke eventually turns black as the plastic from the homeless camp starts to burn. The people in the video eventually gave up and walked away as the fire grew big­ger.

The video also shows the Los An­­geles County Fire Department fire­fighters from stations 31 and 137 who responded and ex­tin­guished the blaze.

The fire burned two outbuildings behind the main brick building in­clu­ding one that was used for mer­chan­dise storage. Sauceda sells a var­iety of collectibles in his shop including clothes, signs, bicycles, jew­elry, outdoor decorations and antiques.

One of the men seen in the fire video has lived behind Sauceda’s business for some time. Sauceda said he cautioned the man about not starting fires.

The fire blackened a tree at the rear of Sauceda’s prop­erty and damaged two out­buil­dings he will need to replace. He will also need to replace the fence.

Sauceda estimated about 50 people live behind the businesses. A large tree to the south of Sauceda’s prop­erty has a three-level tree house in it constructed from wood pallets and tarps.

Sauceda, a Palmdale res­i­dent, said he wanted to open his shop in Palmdale to keep sales tax revenue here.

“I grew up in Palmdale; why wouldn’t I try to es­tab­lish my business here in Palm­dale?” he said.

Sauceda opened his bus­i­ness about two years ago.

Sauceda has had a few break-ins and lost some prop­erty to the homeless peop­le who live behind the businesses.

He pointed to a black box at one en­camp­ment that he said belonged to him. A ditch behind the bus­i­nesses next to the train tracks is littered with trash, including clothes and shopping baskets left by the people who live in the encampments.

Sauceda said he and his bus­i­ness neigh­bors have gone to the city for help to no avail.

“They’ve been saying, ‘You guys gotta do some­thing,’ ”  Sauceda said.

Metrolink controls the right-of-way for the prop­erty west of the railroad tracks, a city official said.

Mike Miller, Palmdale’s di­rector of Neighborhood Ser­vices, said the city’s en­force­ment team is work­ing with Metrolink on abate­ment at the site.

“We’re going to work to get that cleaned up with the code team,” Miller said.

The city works with the pri­vate property owner, wheth­er it is a government agen­cy or an individual, to clean up the property. The city also works with service pro­viders to help the home­less people camped out there.

An emergency winter shel­ter is nearby at An­tel­ope Valley Youth­Build, at 38626 Ninth St. East, but Miler said it has been strug­gling to get people in there.

“There are resources out there if people want them; they just have to want them,” Miller said.

As for the tree house, Mil­ler said if it is on a pri­vate piece of prop­er­ty the city’s Code Enforcement will work with the prop­erty owner.

“We have great code en­force­ment staff who really work with these people … We try to be sensitive with ev­ery­body — the prop­erty owner, the person who’s in need,” he said.

To share your opinion on this article or any other article, write a letter to the editor and email it to editor@avpress.com or mail it to Letters to Editor, PO Box 4050, Palmdale CA 93590-4050.