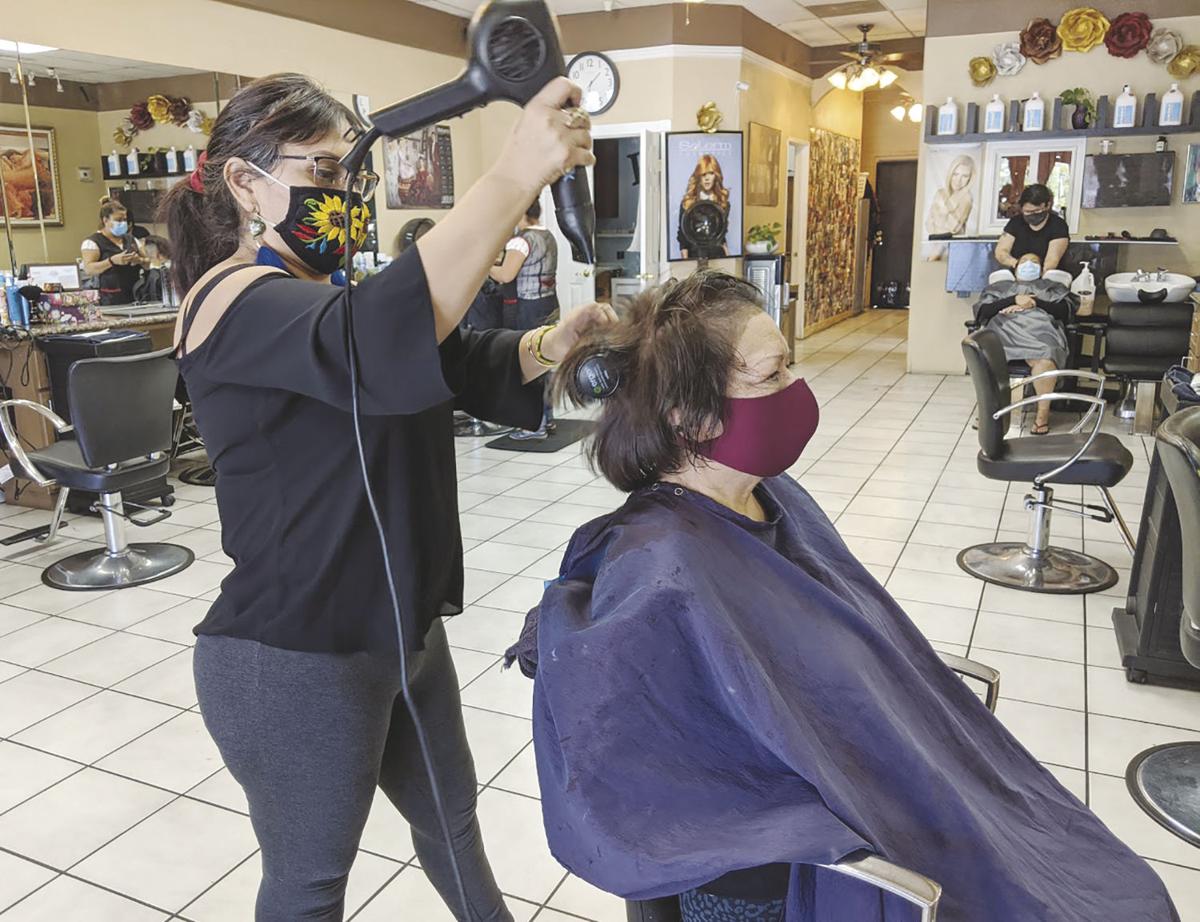 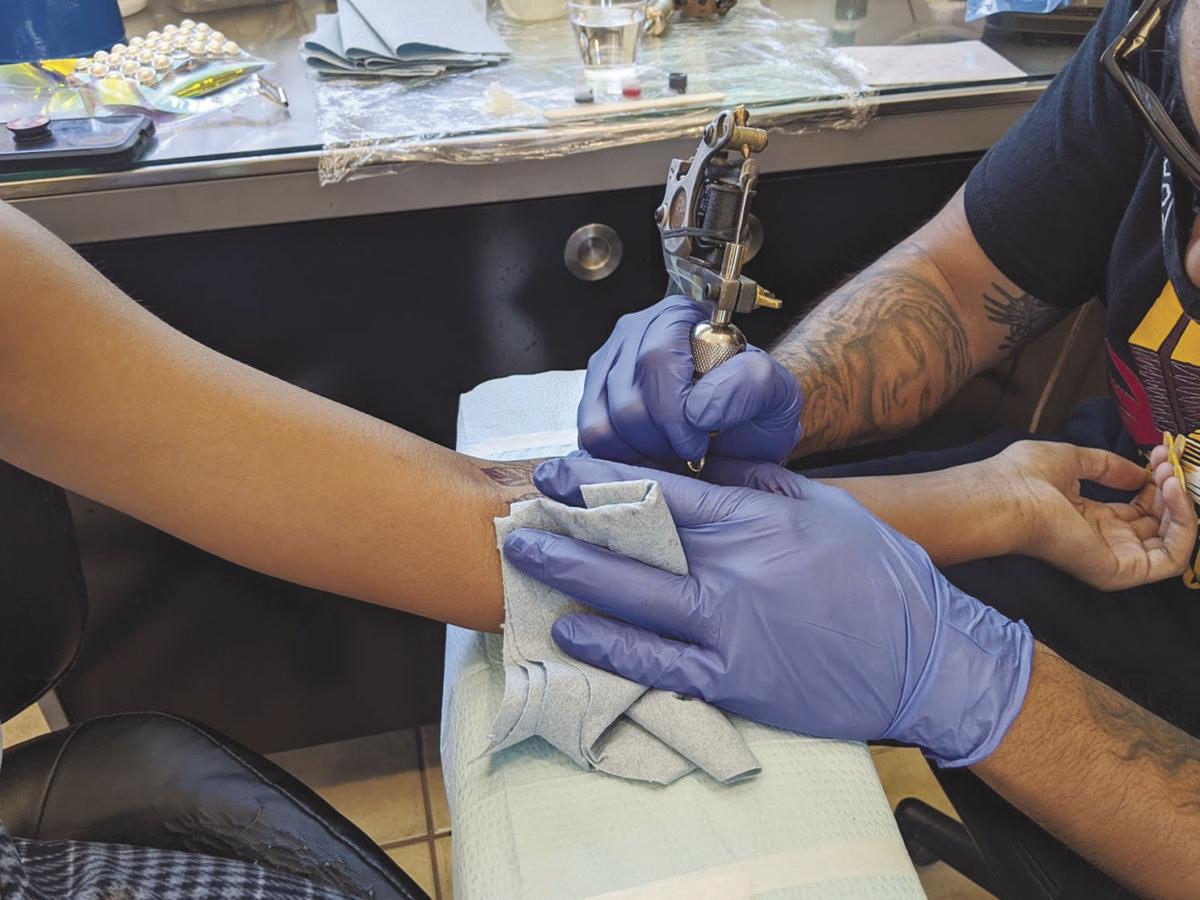 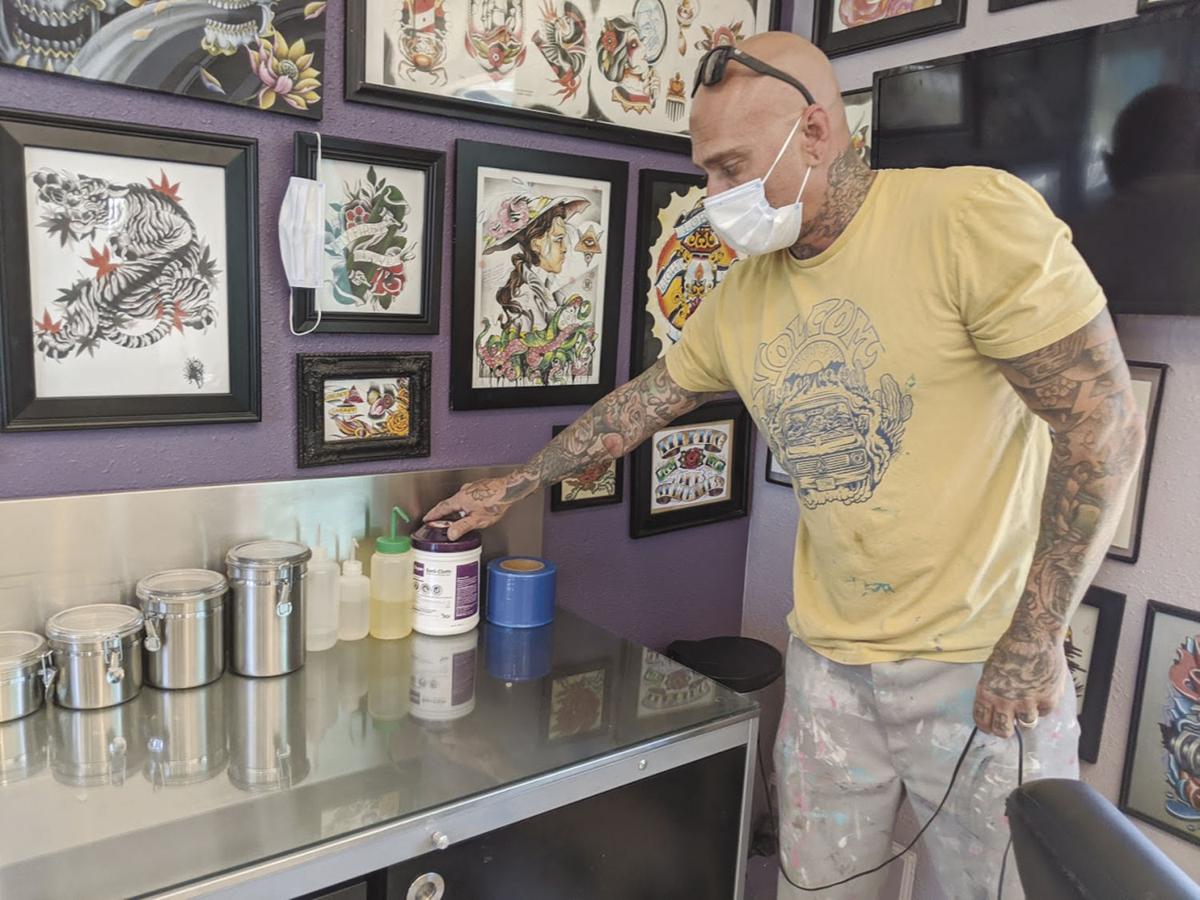 Artist T.  Massari shows off the hospital grade Sani-Cloth surface disinfectant wipes used to clean countertops and other commonly touched areas at Electric Soul Tattoo, the shop he co-owns with his wife Alexandria.

Artist T.  Massari shows off the hospital grade Sani-Cloth surface disinfectant wipes used to clean countertops and other commonly touched areas at Electric Soul Tattoo, the shop he co-owns with his wife Alexandria.

PALMDALE — After more than three months without a haircut, it was welcome news for many people when Los Angeles County and California moved into phase three of the four-phase reopening plan for the economy in June.

Hair salons and barbershops opened with new rules to follow. Customers and stylists each have to wear a face covering. They also have to observe social distancing as best they can. Customers also have to schedule an appointment; no more walk-in haircuts.

Garcia and the other stylists at her salon take turns coming into to work to avoid too many people being in the salon at the same time. At most three stylists work at the same time to maintain social distancing.

Garcia sanitizes the salon chair after each customer and the station area.

“Customers are being very nice about it,” Garcia said. “They appreciate that we’re open. They’re happy they were able to get in.”

Customers also do not mind having to make an appointment or waiting a week or two to get a haircut and color.

Garcia’s salon is well stocked with capes used to protect clients’ clothes because they cannot be reused.

“We wash them so much throughout the day because we cannot use them,” Garcia said.

Customer Leticia Sierra returned to Garcia’s salon for a haircut and color.

“I went to other places and they messed up my hair,” Sierra said. “I go, ‘When they going to open with Hilda?’ Everybody else was messing up my hair, so I’m glad that she reopened. I’m very happy with them. They do a good job and they’re very careful. It’s a good place for me to come.”

Yolanda Pittsinger, owner of Yoli’s Barbershop, 820 East Palmdale Blvd., keeps the door to her shop on Palmdale Boulevard locked so no one will walk in. Clients must make an appointment to get a haircut.

“We were walk-ins before this, first-come, first-served,” Pittsinger said.

Pittsinger schedules a half-hour between customers to allow for time to sanitize the chair get a new cape for each customer.

“I bought a heck of a lot of capes. I have about 60 capes,” Pittsinger said.

Pittsinger added she can serve about 10 clients per day.

The majority of customers are understanding, Pittsinger said.

“I have some that were very upset. They said they won’t come back until they don’t have to wear a mask,” Pittsinger said.

T, and Alexandria Massari, co-owners of Electric Soul Tattoo, were ready to open their tattoo shop at its new location at 835 West Ave. J in Lancaster about the same time the state shut down because of the COVID-19 pandemic.

“It was so sad,” Alexandria Massari said.

The shop opened about  a week ago.

“We’ve got to be six feet apart so pretty much we can only have three people in here,” T. Massari said. “The state of California says we’re not allowed to have a waiting room so we’re not using these couches.”

The tattoo rooms are limited to the artist and the client. No friends allowed.

He showed off a plastic canister of Sani-Cloth surface disinfectant wipes used to clean countertops and other commonly touched areas such as light switches and doorknobs.

Client Jenn Logan stopped in to get a tattoo for the first time in about six months.

“I’m excited,” Logan said. “It’s time to get some new ink. The last one I got was in February so I’ve kind of had some withdrawals.”

Logan got her 17th tattoo based on artwork from the band Silverstein’s debut album. Logan added the tattoo to her “music” arm, which included Deftones, A Perfect Circle and Slipknot tattoos.

“This is something I’ve been wanting to get for a while,” Logan said.

Erica Oveal stopped by Electric Soul to get an ex-boyfriend’s name tattooed on her arm covered with a rose.

They were together about nine months.

“That was the longest relationship I had,” Oveal said.

“I like how they customize your body. You can customize your own body how you want it to look,” Oveal said, adding most of her tattoos were family members’ names.