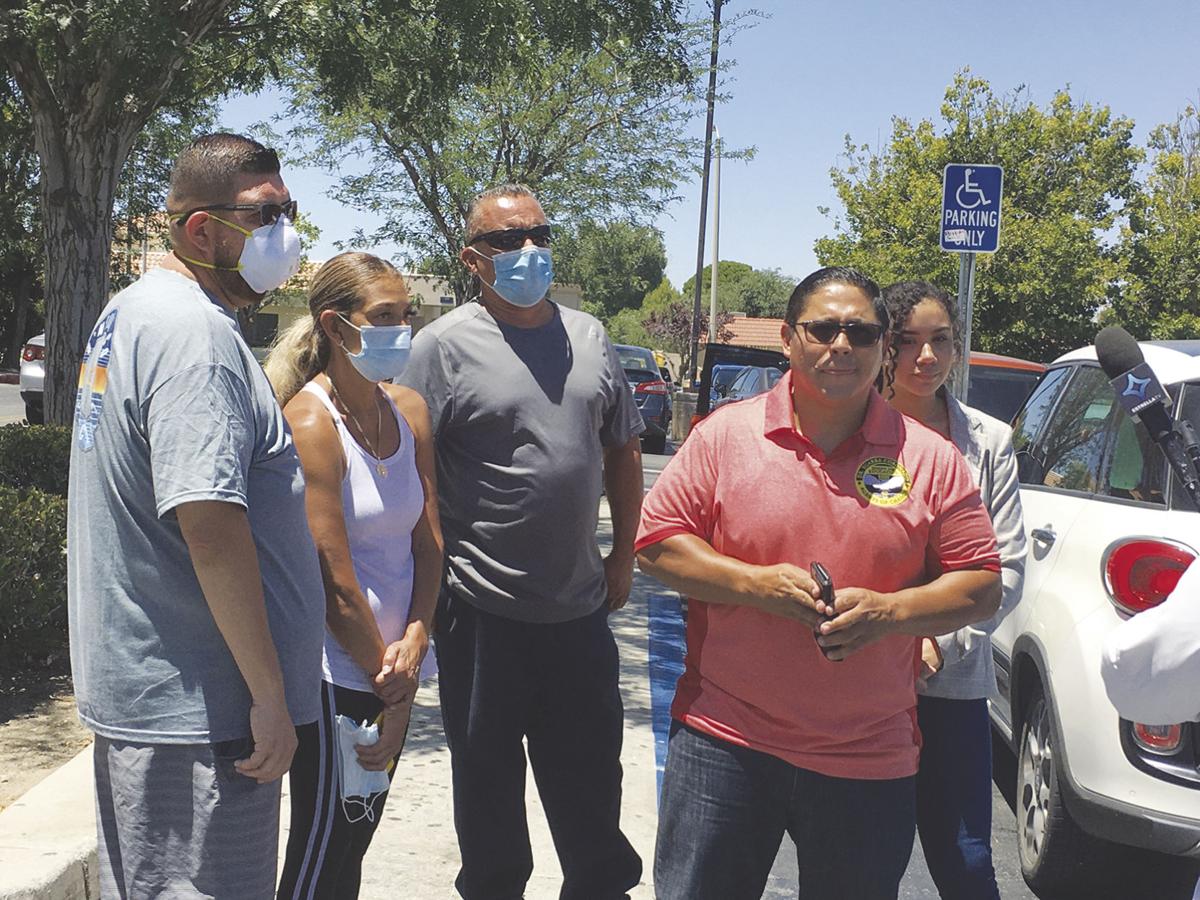 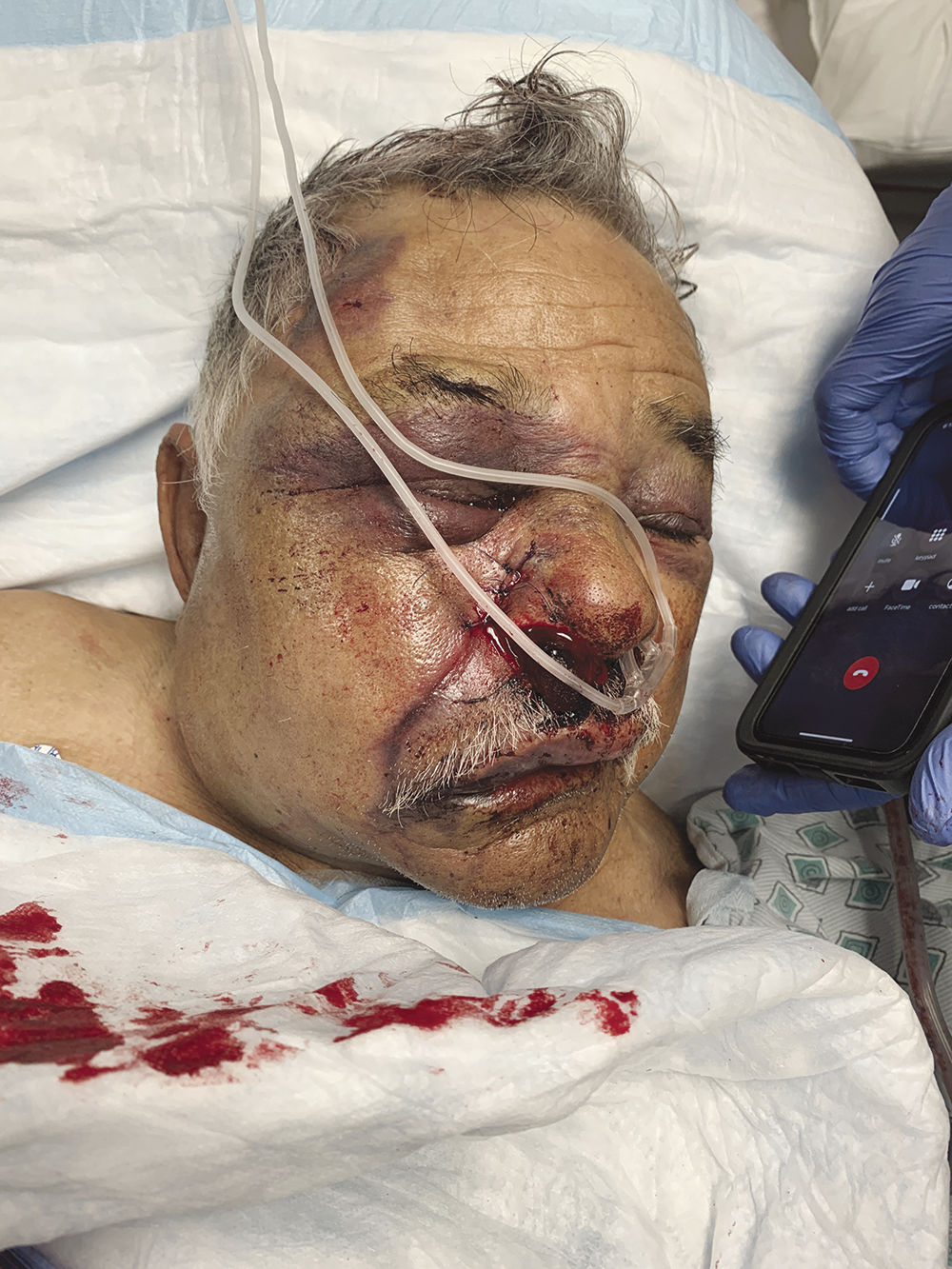 Roberto Flores Lopez suffered severe facial injuries Wednesday when he was beaten while shopping at Superior Grocers on Avenue J in Lancaster. 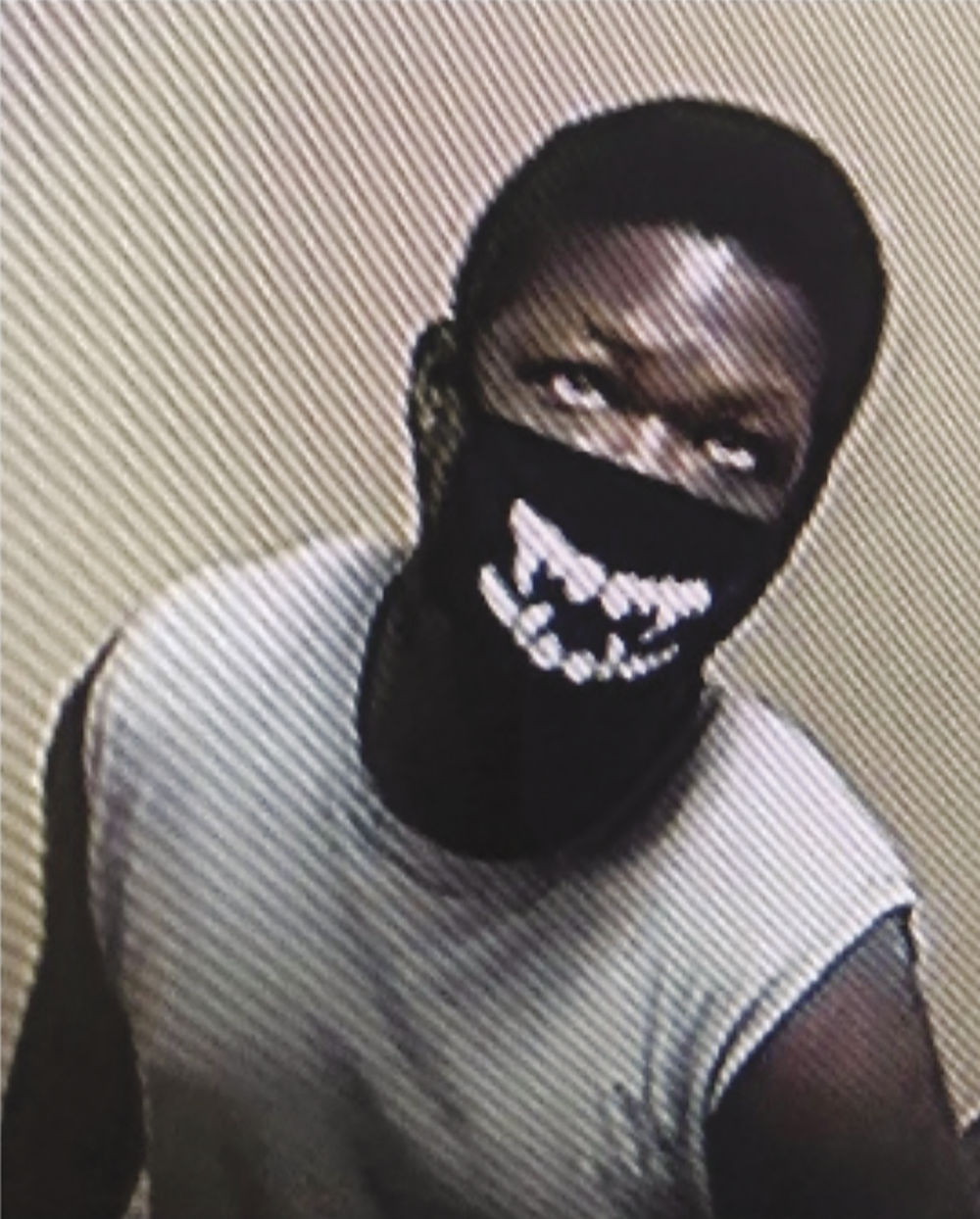 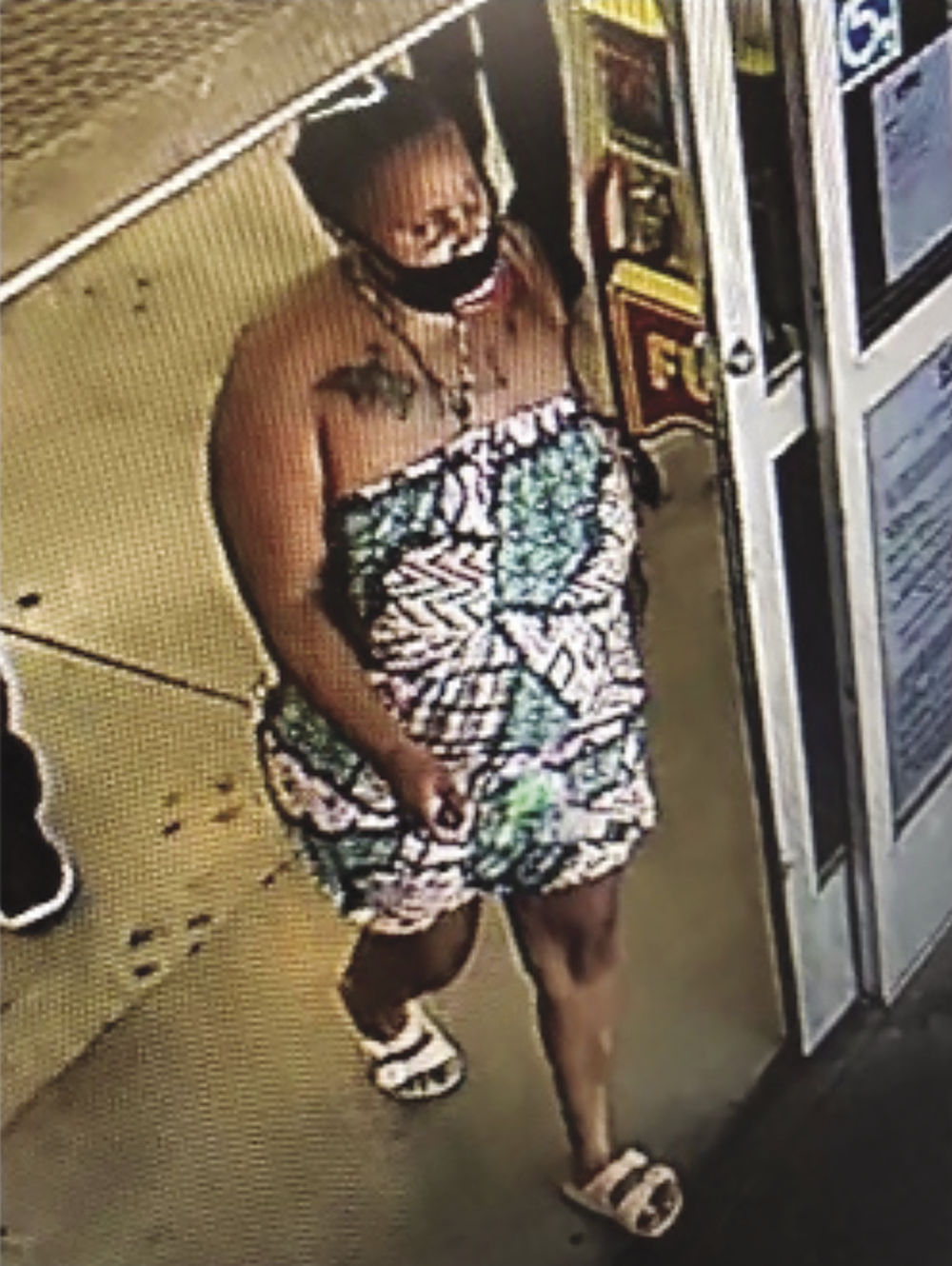 This woman accompanied the suspect accused of beating Roberto Flores Lopez on Wednesday morning in a Lancaster grocery store. 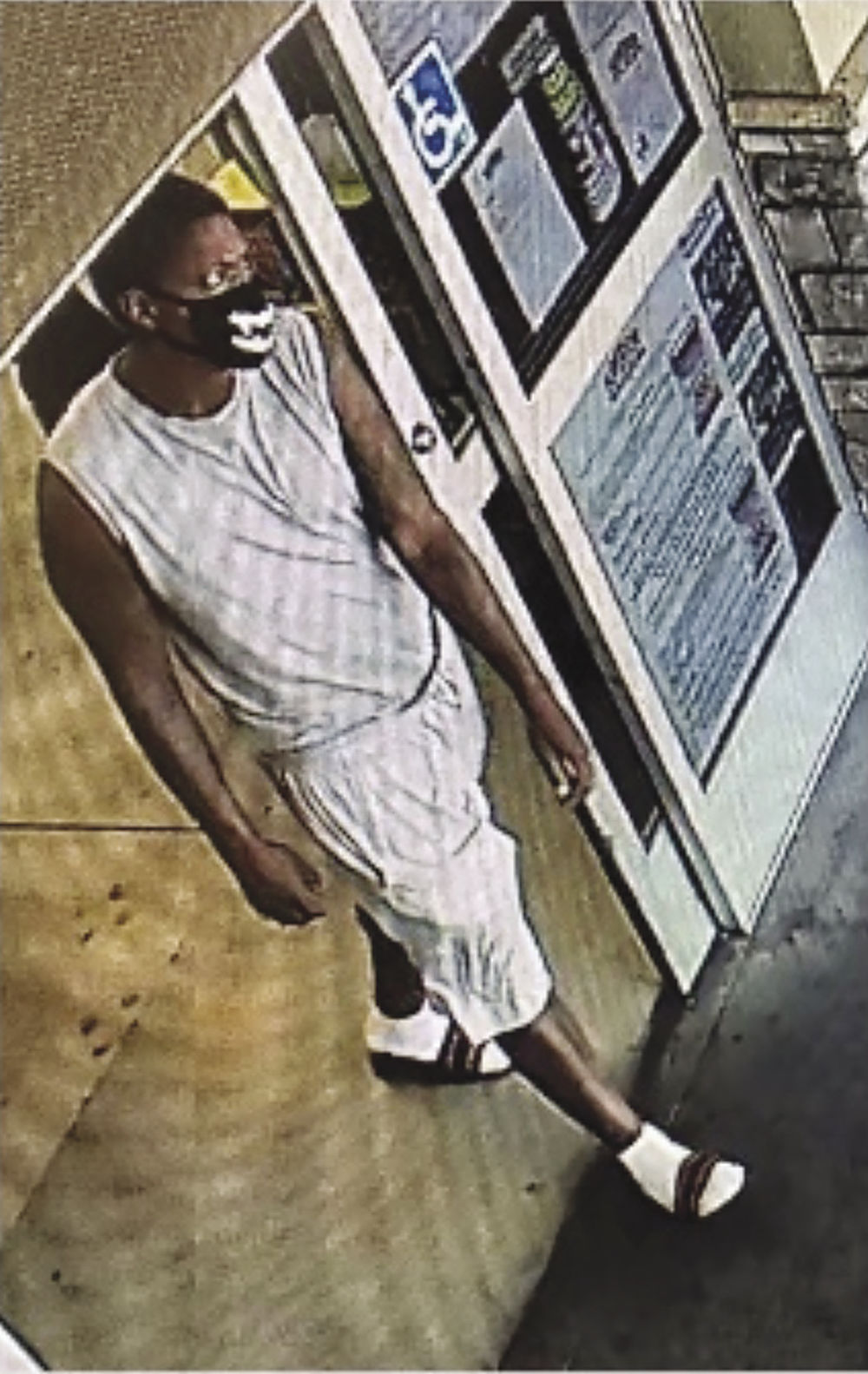 Roberto Flores Lopez suffered severe facial injuries Wednesday when he was beaten while shopping at Superior Grocers on Avenue J in Lancaster.

This woman accompanied the suspect accused of beating Roberto Flores Lopez on Wednesday morning in a Lancaster grocery store.

Wednesday morning started out normal for Roberto Flores Lopez and his wife Emilia Osuna Lopez. They made their daily grocery trip to Superior Grocers on East Avenue J. What happened after they were finished shopping has left their family in shock and the 80-year-old man in the hospital.

Cecilia Ramirez and her family can’t understand why someone would want to hurt their father, and they want answers. Flores Lopez was assaulted by a Black male adult Wednesday morning in the restroom of the supermarket.

Flores Lopez’s son Francisco Ordorico said his parents began shopping, when his father decided to go to the restroom. He went to the cashier to get the code, but then forgot it, so he went back to the cashier, got the code again, then entered the restroom. When he entered, someone was in the stall, so Flores Lopez waited for the man to exit. He then went into the stall and when he exited, he was assaulted by the man who had been in there before him.

“He hit him three to four times and knocked him to the floor,” Ordorico said. “He checked his pocket, but he didn’t have anything on the right side, so he checked again. My dad tried to get up and he punched him again. He got his wallet, took his money, ransacked his wallet and threw the wallet at my dad and started to kick him.”

Ramirez said the suspect also ripped a gold chain and crucifix from her father’s neck before he walked out.

It appears that no one else was in the restroom when the assault happened, so Flores Lopez had no help. He laid on the floor, bleeding and unable to get up, until another man who went to use the restroom found him and called for help.

Meanwhile, Osuna Lopez had no idea what happened to her husband. It seemed he was taking some time to return, so she went to the restroom and knocked on the door, but when no one answered, she assumed he left the restroom.

“She thought, OK, maybe he went out of the bathroom,” Ramirez said, explaining what her mother was thinking. ‘‘ ‘Let me go pay my groceries.’ So she got in line and all of a sudden, she sees the cops and the ambulance and thinks, ‘Wow, I wonder what happened,’ you know, not knowing.”

That’s when Osuna Lopez saw her husband on the gurney, full of blood. She told the paramedics that was her husband and tried to get close but was not allowed to.

Superior Grocers employee Jermaine (no last name given) saw the suspect and a woman enter the store, then exit the store without making a purchase.

“I didn’t really understand what was going on,” he said. “I didn’t see their faces. A co-worker had come from the bathroom and had seen someone bleeding out. I was like, ‘What the hell is going on? What’s he talking about?’ ”

Flores Lopez was taken to Antelope Valley Hospital, where he was stabilized and admitted to the intensive care unit.

The family doesn’t understand why someone would assault an elderly man. Ramirez said the suspect didn’t get anything but a “couple of bucks” because her father doesn’t carry much cash or any credit cards with him.

“My dad is a really good man, he sticks to himself,” Ramirez said. “He doesn’t bother anybody.”

She said he’s a hard worker and works in the onion fields on 90th Street in Lancaster. When Bob’s Big Boy was open in Lancaster, he washed dishes there for 10 years and was even awarded employee of the month.

Ramirez said her father is very reserved and everyone likes him.

The couple, who’s been married for 42 years has lived in Lancaster since 1988. Ramirez said they’ve never had any problems, until now.

“We’re just very upset, very hurt that there’s so much evil in the world that someone would hurt an elderly man that cannot even protect himself,” she said. “We just want him to get caught because if he had no heart for my dad laying there, what do you think he’d do to another person? … We’re just very angry.”

Maria Gomez, the couple’s other daughter, was very worried about her father. She called the Antelope Valley Press on Wednesday afternoon to make sure her father’s story gets out, so the suspect can be apprehended.

“I hope this man gets caught and pays for what he did to my dad,” she said from her Oregon home. “It’s very wrong that he hurt my dad the way he did. He doesn’t bother anybody.”

Wayne B. was shopping at Superior Grocers on Thursday and stopped to talk to the family, who had been outside, speaking with the press.

“He didn’t need to have that happen to him,” Wayne B. said. “I pray to God whoever’s responsible for that gets 10 times worse than what he did to that old man. That’s (expletive) wrong. That’s like someone beating the (expletive) out of my grandfather. That’s wrong.”

Bishop Henry Hearns, who has lived in the Antelope Valley for 60 years, said he’s never heard of anything like this happening before. He did acknowledge that there have been several violent incidents as of late.

“All of us, no matter what color or gender, or race we are, those of us who mean good need to stand strong together with the family until something is done about it,” he said in regard to the Flores Lopez incident. “Our prayers go with them. We pray God’s blessing on them; we pray God heals Grandpa or Papa. Whatever we can do to make to make life better for them, we want to do that.”

A press release from the Lancaster Sheriff’s Station said the suspect is 22-25 years old, approximately five-foot-eight-inches tall and weighs 250 pound. Witnesses indicate he fled on foot and was last seen wearing a white T-shirt and blue shorts.

Anyone with information is encouraged to call 661-948-8466. Those who wish to remain anonymous may call Crime Stoppers at 800-222-8477 or use a smartphone by downloading the P3 Tips mobile app or visiting http://lacrimestoppers.org

They should have CCTV photos of the suspect...if not "why not"? Average American's are caught on CCTV 75+ times a day. There are exceptions no doubt but I bet suspect is on camera...attempted murder carries a stiff penalty..for what $10, $20, $30 bucks. Play stupid games...win stupid prizes (Candice Owens)