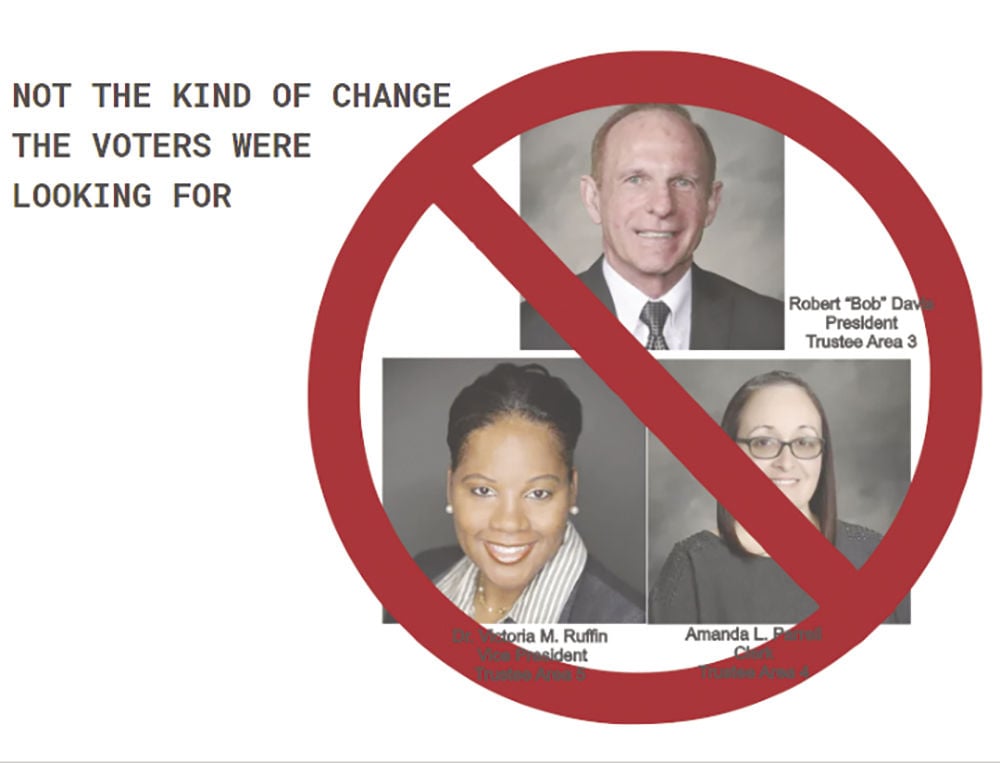 This graphic is from a website by proponents of the effort to recall Antelope Valley Union High School District Board President Robert “Bob” Davis, Vice President Victoria Ruffin, and Clerk Amanda Parrell.

This graphic is from a website by proponents of the effort to recall Antelope Valley Union High School District Board President Robert “Bob” Davis, Vice President Victoria Ruffin, and Clerk Amanda Parrell.

Recall petitioners served Davis, Ruffin, and Parrell each a Notice of Intention to circulate a recall petition prior to the Board’s April 11 meeting. The Notice of Intention was filed April 15, which means Davis, Ruffin, and Parrell have until Monday to file a response. As of Friday, only Davis and Ruffin filed responses, according to the Los Angeles County Registrar-Recorder’s office.

The responses are not made public until they are circulated. The recall proponents cannot start circulating the petition until after county elections officials approve the form and wording of the recall petition to ensure it meets Elections Code requirements.

Davis, Ruffin and Parrell quashed any chance they had at redemption in the eyes of the District employees and community members when they voted in favor of three controversial agreements with Los Angeles-based law firm Harris & Associates. The agreements could end up costing the District hundreds of thousands of dollars that would take money away from programs for students.

Many employees took the day off to attend the meeting. The audience spilled out of the boardroom and into the lobby.

Employees and community members spoke out against the agenda items — an open-ended contract with Los Angeles-based law firm Harris & Associates, and two open-ended actions authorizing the firm to pre-qualify a third party to investigate allegations of discrimination and disparate treatment in the suspension and expulsion of minority students and in the district’s hiring and promotional practices.

Shouts of “recall” punctuated the approximately two-hour meeting as the Board majority approved the actions in spite of overwhelming public testimony against them. Trustees Jill McGrady and John Rush voted no on all three after their motions to table all three items failed. Student trustee Noah Sveiven also voted no.

Speaking at the end of the meeting, when the Board was set to vote on the third and final item — to authorize Harris & Associates to pre-qualify a neutral third-party investigation into allegations of discrimination and disparate treatment in the district’s hiring practices — Sveiven announced he conditionally supported Davis, Ruffin and Parrell’s resignation, and the effort to recall them. That drew cheers and applause from the audience.

Davis did not acknowledge Sveiven. Rather, he asked Rush if he had any comments.

Davis ignored Sveiven’s comments for a second time, and asked Rush if he had any comments.

The action moved forward, and Davis, Ruffin, and Parrell approved the authorization.

The “misdeeds” of the past that Sveiven referenced include lucrative contracts for friends and associates of Davis and Ruffin in the 127 days since Ruffin and Parrell took the oath of office.

Davis, Ruffin and Par­rell also voted to award an open-ended con­tract to D’Vacor En­ter­tainment Group, a north­ern California-based events and entertainment plan­­ning company led by Ruf­fin associate Rose Lyles to create individual websites for the trio, at an estimated cost of up to $5,000 each and $1,000 a month for maintenance. The illegal contract also included travel ex­pen­ses. The contract was deemed illegal by District General Counsel Bridget Cook because it called for spending public funds on personal websites for the Board majority.

Lyles sent an email to Davis on April 11 announcing she withdrew her contract with the District because she felt her company was no longer a good fit for the District.

Davis, Ruffin and Parrell also approved a $48,500 contract with a newly formed security company led by Bruce Frank, a former co-work­er of Davis, to conduct a security analysis of the District.

The Board majority previously approved an open-ended agreement with Harris & Associates and its $400-an-hour lead attorney John W. Harris at the Jan. 24 meeting. That was in spite of the fact that the District has Cook, and an existing contract with the firm of Fagen, Friedman, and Fulfrost, one of the state’s leading educational law firms. That contract came back before the Board on Thursday after Davis authorized Harris to attend two meetings in addition to other uses because it was not properly agendized.

Davis, Ruffin, and Parrell also denied pay raises for unrepresented employees that include district ad­min­is­tra­tors as well as school site prin­cipals and their ex­ec­u­tive secretaries, sec­ur­ity dir­ect­ors and con­fi­den­tial em­ploy­ees such as those who handle per­son­nel data. Their action came after the Board approved similar packages for teachers and classified employees

The change negatively impacted student leaders from throughout the District.

Davis, Ruffin, and Parrell also joined to stop Knight High School’s successful Parent In­sti­tute for Quality Education from returning for a third year, after they voted against it last week.

The action moved forward, and the trio approved the authorization.

In addition to favorable contracts to friends and associates, Davis, Ruffin, and Parrell voted to spend $1,500 on District-issued iPhones for themselves — only three people to have a District-issued iPhone. They also approved spending nearly $6,000 to purchase new iPads and Microsoft Surface tablets for themselves, and more than $10,000 to attend the National School Boards Association conference in Philadelphia last month.

Once the recall petitions are approved for circulation, proponents will have 120 days to circulate the petitions, based on the number of registered voters in the three Trustee Areas represented by the Board majority.

AV Union High School District conducted its first election under the by-trustee area election system on Nov. 6, when Ruffin and Parrell were elected.

Ruffin’s Trustee Area No. 5 has 36,938 registered voters. So proponents would need to collect 7,388 signatures to meet the 20% minimum requirement.

However, county elections officials recommend petitioners collect more signatures than the minimum to have cushion in the event of invalid signatures. Only those registered voters who live within the boundaries of the individual trustee areas for Davis, Ruffin, and Parrell can sign the petition for the area where they live.

Recall proponents setup a website, www.avboardrecall.com, to inform voters about the effort. There is also a “get involved” link for anyone interested in supporting the effort. The site will have regular updates once proponents begin circulating the recall petitions.

To share your opinion on this article or any other article, write a letter to the editor and email it to editor@avpress.com or mail it to Letters to Editor, PO Box 4050, Palmdale CA 93590-4050.