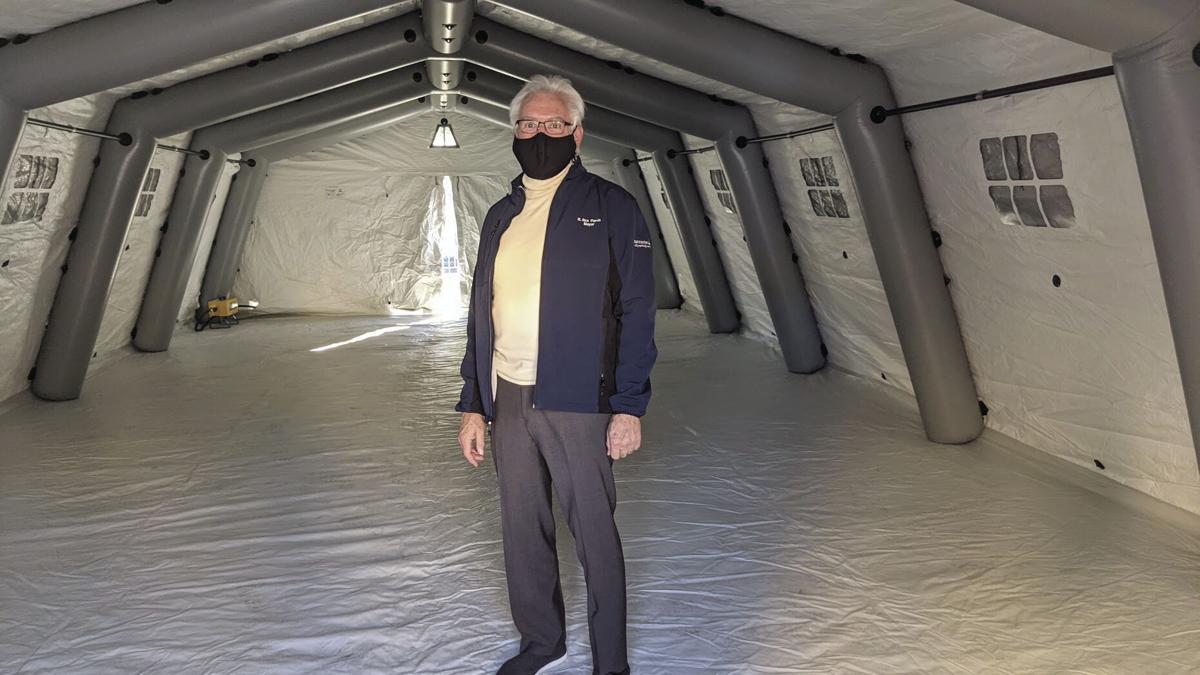 Lancaster Mayor R. Rex Parris stands inside one of the tents that will be used as an emergency field hospital by Samaritan’s Purse in the Antelope Valley Hospital parking lot. 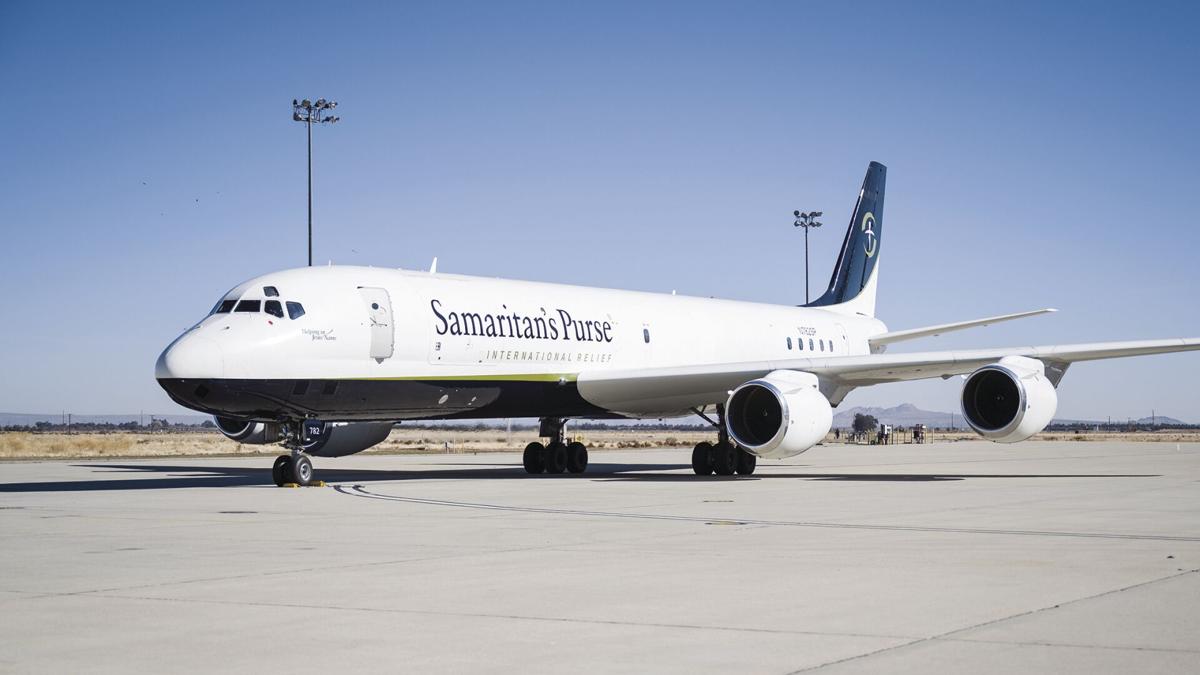 A Samaritan’s Purse DC-8 taxis into NASA Armstrong Flight Research Center at Air Force Plant 42 in Palmdale on Monday. The aircraft delivered supplies for an Emergency Field Hospital being constructed at Antelope Valley Hospital in nearby Lancaster. Samaritan’s Purse is a charitable organization which has partnered with Lancaster Baptist Church, the City of Lancaster and AV Hospital to provide a 70-bed temporary field hospital to support COVID-19 patients.

Lancaster Mayor R. Rex Parris stands inside one of the tents that will be used as an emergency field hospital by Samaritan’s Purse in the Antelope Valley Hospital parking lot.

A Samaritan’s Purse DC-8 taxis into NASA Armstrong Flight Research Center at Air Force Plant 42 in Palmdale on Monday. The aircraft delivered supplies for an Emergency Field Hospital being constructed at Antelope Valley Hospital in nearby Lancaster. Samaritan’s Purse is a charitable organization which has partnered with Lancaster Baptist Church, the City of Lancaster and AV Hospital to provide a 70-bed temporary field hospital to support COVID-19 patients.

LANCASTER — Samaritan’s Purse will open a 54-bed emergency field hospital in the parking lot of the Antelope Valley Hospital to care for patients suffering from COVID-19 and to offer relief to an overwhelmed healthcare system.

Patients treated at the site will be limited to those who are COVID positive, but who do not need the support of a ventilator.

“I think this hospital, the fact that they’ve come, is going to save hundreds of people’s lives,” Lancaster Mayor R. Rex Parris said a Monday afternoon at an outdoor news conference.

Samaritan’s Purse is an international Christian relief organization led by the Rev. Franklin Graham, the son of the late pastor Billy Graham.

“You have saved us, you have given literally a gift that can only come from God,” Parris said.

Parris said Pastor Paul Chappell of Lancaster Baptist Church called him and said Franklin Graham offered the community a field hospital. The mayor asked AV Hospital CEO Ed Mirzabegian if they could use a field hospital and he said yes.

“They’re going to help us tremendously over the next couple months,” Mirzabegian said at the news conference.

AV Hospital has seen about 21,000 patients since the COVID-19 pandemic began. Out of that, about 2,500 were hospitalized due to COVID-19. As of Monday, there are about 134 COVID patients in the hospital and 210 people have died.

AV Hospital was full as of Monday, including the intensive care unit. The floors are also full.

“This is not all COVID, but it is the season that we have a lot of patients coming to use for a lot of other disorders,” Mirzabegian said, adding he is grateful for the help of Samaritan’s Purse. “So these are busy times for us.”

Samaritan’s Purse is providing the field hospital at no cost to the city or the hospital.

“This is a Christian organization majoring in worldwide compassion and bringing hope and help where it’s so greatly needed,” Chappell said.

Samaritan’s Purse’s Assistant to the Vice President of Programs and Government Relations Edward Graham said they have a talented medical team led by Dr. Elliott Tenpenny who has gone all over the world, setting up in remote areas.

“We never thought we’d be serving in the United States of America,” he said. “This pandemic has changed everything.”

Samaritan’s Purse served in Northern Italy with a hospital early on in the pandemic, as well as New York City, as it, too, was hit hard by the virus.

“All around the world, we’ve been serving and fighting this virus in several different countries,” Graham said. “When this came up, this request, dad called me and said see what we can do, get a team out there.”

He said they are a proud Christian organization.

“Your citizens in this community will get first-class care,” Graham said.

He expects the first patients to be served by the end of the week.

“Know that they’ll be loved, they’ll be cared for and yes, they’ll be prayed over, but our hope is that we can be part of a miracle,” Graham said. “And we can see this community start healing, not just healing physically from this virus, but also spiritually.”

To support the effort, Air Force Plant 42 in Palmdale has allowed use of its airfield for delivery of initial arrival components as well as resupply missions. The 412 th Test Wing leadership at Edwards Air Force Base, has also put a call out for volunteers to help staff the emergency field hospital.

“Plant 42 is often referred to as the ‘downtown’ Air Force,” Air Force Plant 42 Director Dr. David Smith said. “Our location puts us strategically in the heart of the Lancaster/Palmdale communities in the Aerospace Valley. As such, our personnel, and more importantly our thousands of mission partners, call this home. We are delighted to extend medical care to our community as it directly impacts our ‘home team’ area of operations. This care facility also directly supports our own personnel’s medical needs, which in turn directly support the warfighter.”

Graham was accompanied by Plant 42 and NASA Armstrong leadership as the DC-8 arrived and its contents were off-loaded by NASA and Samaritans Purse crews.