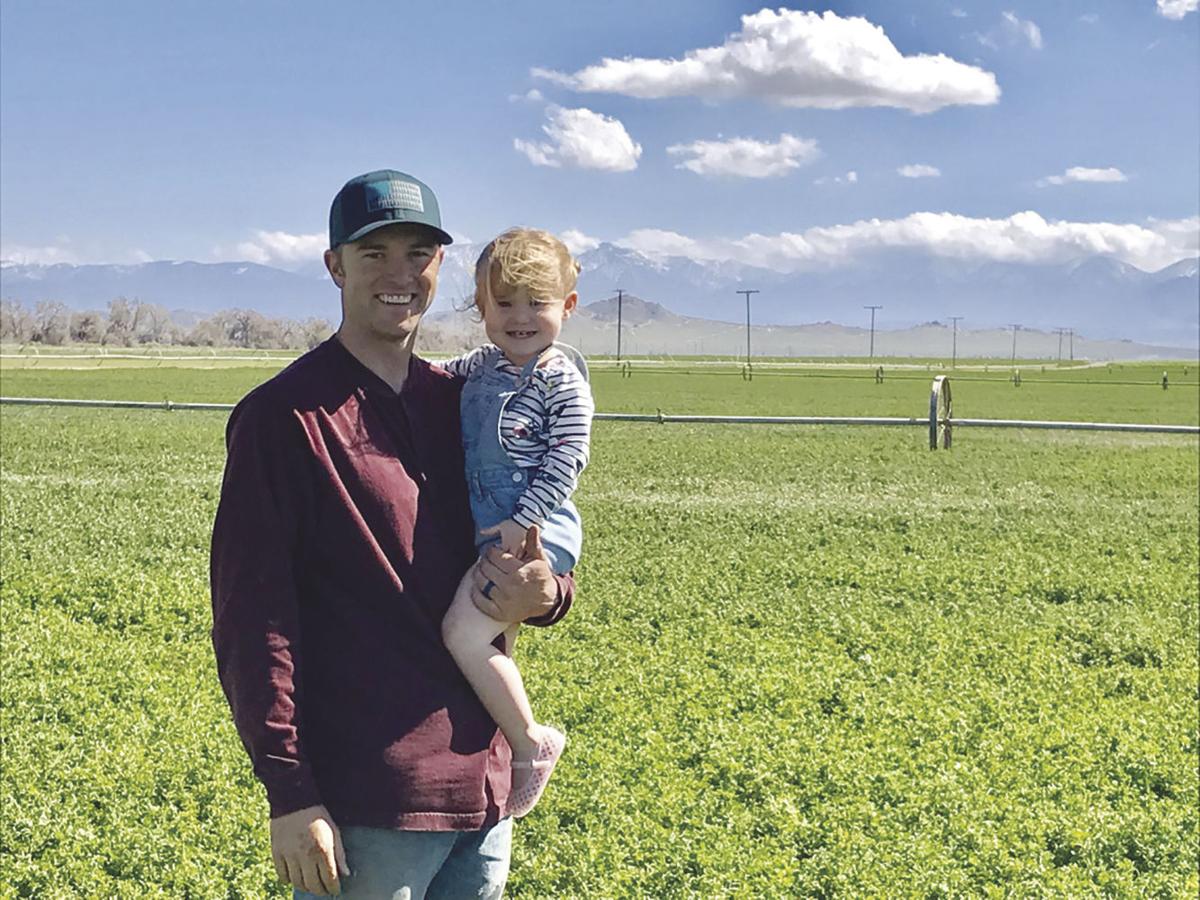 ALL IN THE FAMILY — Fourth-generation farmer Jake Kyle holds his daughter Elly in one of the Kyle & Kyle Ranches alfalfa fields in the Wanda Mia Ranch. 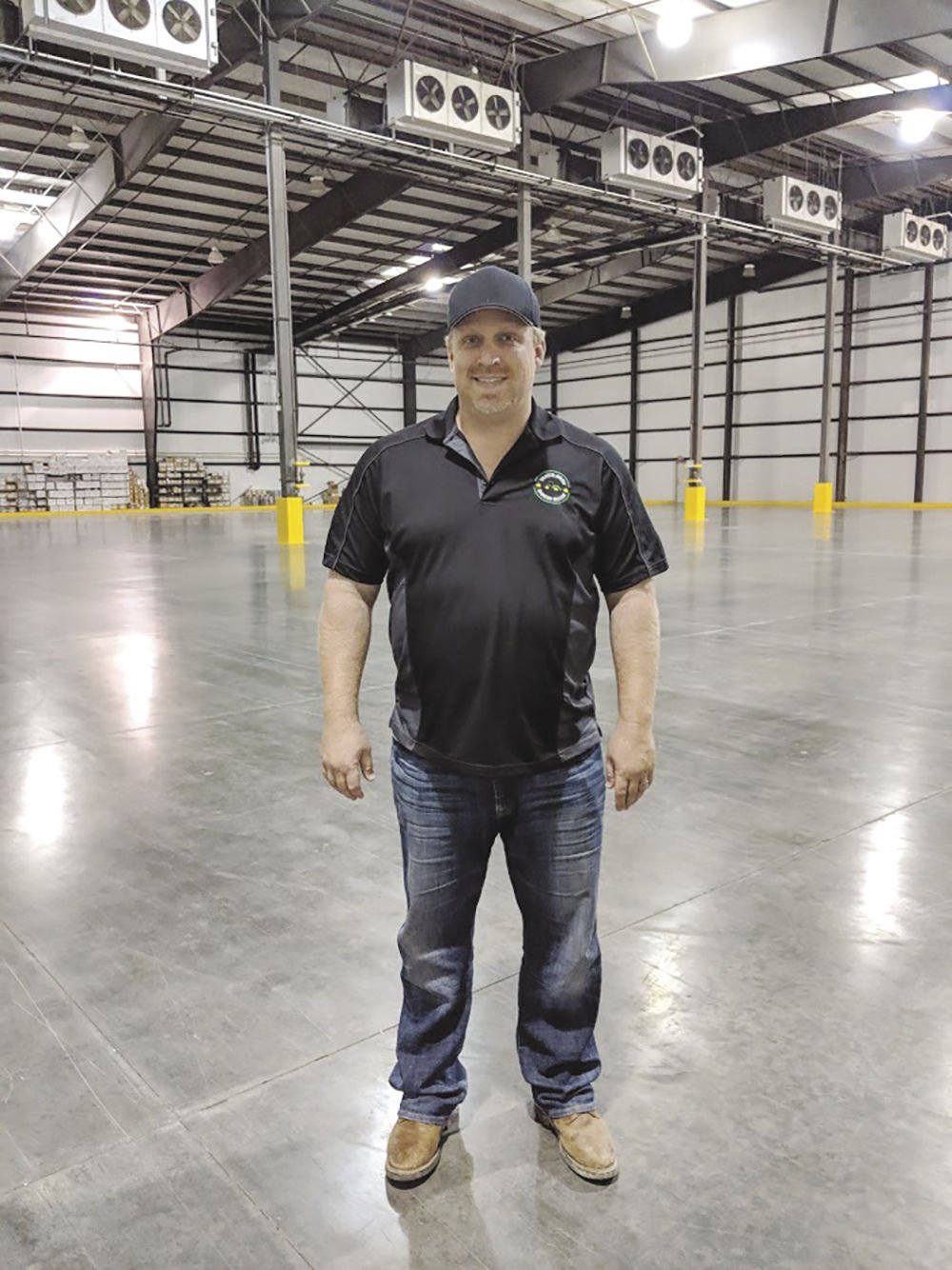 CLOUDY FUTURE — Brandon Calandri, the last onion farmer in the Antelope Valley, stands in an empty onion warehouse at property that is under escrow to a marijuana company. Gary Van Dam of High Des­ert Dairy/Van Dam Broth­ers (above) is the Valley’s last dairy farmer. 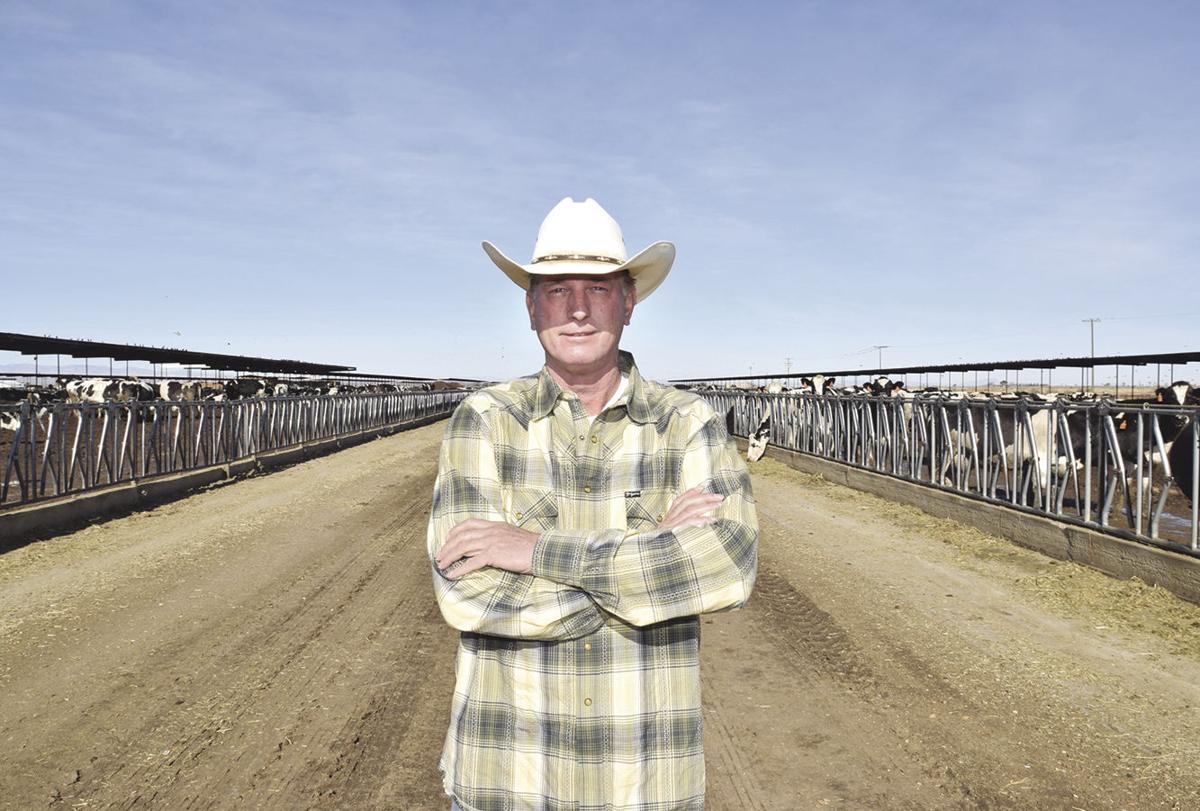 ALL IN THE FAMILY — Fourth-generation farmer Jake Kyle holds his daughter Elly in one of the Kyle & Kyle Ranches alfalfa fields in the Wanda Mia Ranch.

CLOUDY FUTURE — Brandon Calandri, the last onion farmer in the Antelope Valley, stands in an empty onion warehouse at property that is under escrow to a marijuana company. Gary Van Dam of High Des­ert Dairy/Van Dam Broth­ers (above) is the Valley’s last dairy farmer.

LANCASTER – The sweet fra­grance of onions permeated the air during a recent visit to Cal­andri Farms’ Lancaster fac­ility on 70th Street East and Avenue K.

“If you love your stew this is the place to hang out,” Brandon Calandri said.

His late grandfather John Calandri Sr. started onion farm­ing in the Antelope Valley in 1958. His father, John Calandri Jr., picked up the family bus­iness and also farmed for decades before he retired.

At one point there were 29 onion farmers working about 5,000 acres in the Antelope Val­ley. There is a fraction of that left now.

“I’m the last one,” Calandri said.

Calandri grows white on­ions and red onions. You can pur­chase them locally in Stater Bros. Markets and Vallarta Su­per­markets.

The Antelope Valley’s ag­ri­cul­tural legacy is endangered. The blame can be attributed in part to California’s higher labor costs and a 2015 court sett­le­ment that set limits on ground­water pumping for users across the Valley.

“We face a lot of obstacles now,” Julie Kyle of Kyle & Kyle Ranches.

The Kyles lost more than half of their water through the adjudication class action suit.

Kyle, her husband Gailen, and son Jake are third- and fourth-generation farmers. The family grows alfalfa, grain hay and wheat.

Their farming roots date back to 1935 when Gailen’s family came to the Valley. Julie’s fam­ily of Basque sheepherders ar­rived in the Valley in the 1950s.

“We have a long history of farming and agriculture in this area,” Julie Kyle said.

Jake Kyle intends to continue with the family business, Julie Kyle said of her 28-year-old son.

“We’re going to do ev­ery­thing we can to continue farming. We’re not going to go easily, let’s put it that way,” Julie Kyle said.

Some California farmers moved their operations to Mex­ico where the labor and water costs are significantly less.

There used to be a few thousand acres of fruit, cher­ry, and almond trees, and almonds. There are no more almonds growing in the Valley. There are some you-pick orchards in the west­ern part of the Val­ley, such as Villa de Sol in Leona Valley, the largest you-pick cherry orchard in South­ern California.

But agriculture in gen­er­al in the Valley has been disappearing fast.

“Ag is virtually dead in the Antelope Valley. There’s just not many left,” Cal­an­dri said.

The former Gene Wheel­er Farms onion facilities on Avenue H-6 near Tre­vor Av­en­ue were sold to a med­ical marijuana com­pany.

Calandri’s facilities on 70 th Street East and Avenue K, and another one on Avenue L are in escrow for a marijuana company.

“We’ve got plans to rent some facilities just to stay in business,” Calandri said. “Lord willing, some doors get open for us to be able to continue in the onion business.”

Calandri and his part­ners in SoCal Farms LLC are looking at another crop to extend the Valley’s ag­ri­cul­tural legacy — industrial hemp.

“It’s being done with the best intentions,” Calandri said.

Hemp is used in thous­ands of different products. It is used as a binding agent in concrete instead of rebar. It is used in paper, clothing, and rope. Hemp can also be used to make biodegradable plastic. You can even make hemp straws.

Although hemp and mar­i­juana are members of the can­nabis family, the main dif­fer­ence be­tween the two is that mar­i­jua­na can con­tain up to 30% of the psy­cho­active tet­ra­hy­dro­canna­binol, or THC. Hemp con­tains less than 0.3% THC.

Calandri and his part­ners in SoCal Farms, a lim­ited liability company, will conduct a research project in col­lab­o­ration with Antelope Valley College to see where the hemp market will take them.

AV College students will have an opportunity to get involved in learning plant science through industrial hemp.

“For students it’s a great opportunity. We have as a goal to try to enhance our plant sciences program,” Uhazy said.

“It’s an opportunity that we need to seize because the agriculture industry in the Antelope Valley has suffered tremendously over the past years,” Calandri said.

One of the benefits of growing industrial hemp is that it takes less water to grow.

Calandri expressed thanks to local politicians such as for their support of local agriculture.

“I knew nothing about hemp when we started, It was the local farmers out there who reached out to me,” Wilk said.

The local farmers reached out to Wilk to help get state law in compliance with federal regulations so they could grow industrial hemp.

In addition to taking less water to grow industrial hemp can also help rejuvenate the ground and sequester carbon.

Wilk has a “clean up” measure, Senate Bill 153, for this year’s legislative ses­sion to bring the state into compliance with the la­test federal Farm Act, which legalized in­dus­tri­al hemp with some re­stric­tions.

“With this hemp in­i­tia­tive it’s going to allow our far­mers to remain in ag­ri­cul­ture,” Wilk said.

Wilk expects to the laws to go into effect by 2021.

The future of industrial hemp in the Valley could also lead to a manufacturing mecca in the Valley that would allow fam­ilies to stay and work at home, Wilk said.

Calandri looks to plant his first crop of hemp next month. It should be harvested in August.

Calandri said they will work hand-in-hand with AV College on all aspects of the crop, including water consumption and the crop’s carbon footprint as well as the potential economic impact.

The hemp grown by SoCal Farms will be or­gan­ically grown. They are also the first to re­ceive per­mission from the Los An­gel­es County Ag­ri­cul­tural Com­missioner.

“We are meeting all federal and state regulatory requirements to be able to operate. … Which has been a challenge, it’s been about a two-year process,” Calandri said.

“I really appreciate it,” Calandri said.

Crist said they try to help local farmers through agen­cies such as the An­tel­ope Valley Air Quality Man­age­ment District with grants to up­grade heavy duty equip­ment such as tractors with lower emissions vehicles. They also work with local farm­ers through the Los Angeles County Sanitation District No. 14.

“We own a lot of property with the Sanitation District and so we have them farm that land so it’s not a dust bow,” Crist said.

“We don’t want to lose our heritage. That’s what the Antelope Valley is about,” Crist said.

“There’s a lot of land out here that are farmed by farmers. We would have a lot more dust in the air if it wasn’t for the farmers,” Crist said.

The local farmers not only employ a lot of people they also give back to the community.

Gary Van Dam, of High Des­ert Dairy/Van Dam Broth­ers, is not only the last dairy farmer in the An­telope Valley, he’s the last one in Los Angeles County.

“Our fear is that with these water restrictions the dairy farm will be sev­ere­ly cut back on feed. We’re def­initely working on dif­fer­ent options,” Van Dam said.

Van Dam grows his own feed for the cows. They have about 4,000 acres of alfalfa.

With the water ad­ju­di­ca­tion case Van Dam said they had to cut back on their water usage.

“When you’re cutting back about 50% you’re going to make changes,” Van Dam said.

But like Kyle and Calandri, Van Dam is not ready to give up.

“It’s been a tough road but it’s something we feel we need to adjust to the mod­ern technology of wat­er­ing alfalfa and being able to grow a cheaper, you know maybe Bermuda grass or something that will take less water,” Van Dam said. “We’ll always be look­ing at every avenue we can to be able to compete in the Valley.”

To share your opinion on this article or any other article, write a letter to the editor and email it to editor@avpress.com or mail it to Letters to Editor, PO Box 4050, Palmdale CA 93590-40