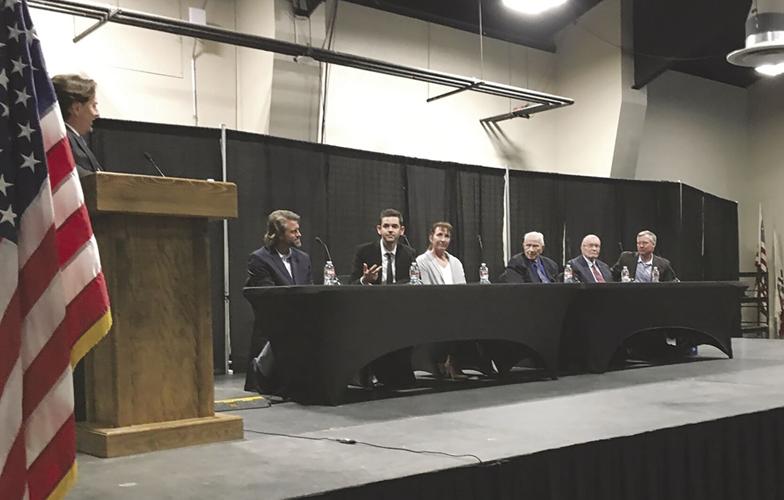 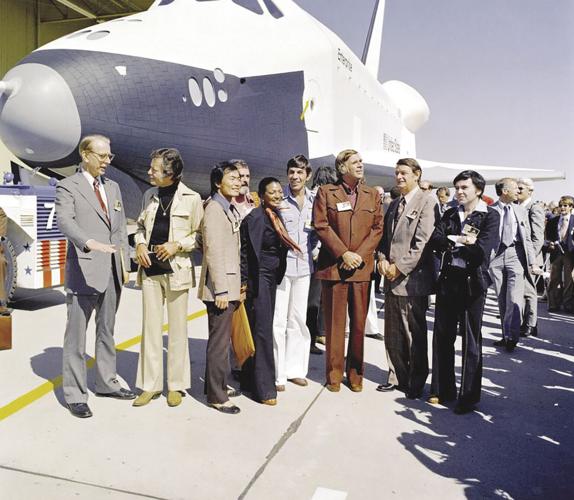 “Star Trek” creator Gene Roddenberry (third from right) joins the cast at Palmdale Air Force Plant 42 for the 1976 rollout of the space shuttle prototype Enterprise, named for the series’ spacecraft.

“Star Trek” creator Gene Roddenberry (third from right) joins the cast at Palmdale Air Force Plant 42 for the 1976 rollout of the space shuttle prototype Enterprise, named for the series’ spacecraft.

LANCASTER — For decades, Hollywood science fiction has served as a source of inspiration for real-world aerospace achievements. Today’s aerospace engineers, pilots and astronauts are as likely to be inspired to join their field by what they saw as a child watching “Star Trek” or “Star Wars,” as an earlier generation was by the Apollo moon missions.

That connection was celebrated, on Saturday, in the Flight Test Museum Foundation’s annual Gathering of Eagles, held at the Antelope Valley Fairgrounds.

The event serves as a fundraiser for the Foundation, which is building the Flight Test Museum and STEM Education Center, just outside the gates at Edwards Air Force Base, with the intent of inspiring future generations.

“The museum is more than just a museum. What you’re really supporting is STEM (science, technology, engineering and math) education, it’s communication within our industry,” Foundation Chairman Art Thompson said. “By creating a neutral ground that we can speak together at and inspire the next generation of kids, that come to you (in industry) because they’re inspired.”

Thompson noted how the elder Roddenberry inspired his own long and successful aerospace career, and how, in filming the original “Star Trek” series, he tapped into much of the real-world technological advancements in Southern California to support the series’ vision of the future.

The ties between “Star Trek” and spaceflight is perhaps epitomized by naming the space shuttle prototype Enterprise, after the “Star Trek” spaceship, the result of lobbying by fans.

Roddenberry has had fans approach him to say the show inspired them and made them believe they could be something no one else thought they could.

Although times have changed, and the “Star Trek” franchise with them, that fictional world still maintains the values of “infinite diversity from infinite combinations.”

“It’s not about tolerance; it’s about acceptance. The only way we grow and evolve is through new ideas,” Roddenberry said. “That is the core backbone of ‘Star Trek.’ ”

“I am very proud of the philosophy, the dialogue, the idea in ‘Star Trek’ that we can all come together,” he said. “It is obviously a challenge. … It is hard as hell to voluntarily expose yourself to new ideas, especially ideas you don’t agree with.”

The fictional worlds of “Star Trek” and “Star Wars” were cited as inspiration for some on the panel in a discussion about where aerospace has been and where it is headed in the future.

When asked about what inspired their interest in aerospace, the younger panelists, Persall and Isaacman said it was the movies, while Melroy, via a recorded message as she could not attend, cited the Apollo program.

For Latimer and Ericson, it was following a lifelong dream of flying and being an astronaut.

Asked about how flight test differs from spaceflight test, Latimer said she noted a fundamental difference in how her colleagues on the Launcher­One rocket approached a test flight, compared to her experience in the cockpit piloting the carrier aircraft.

For aircraft, test pilots plan for various different test scenarios and how to  recover from contingencies. For the rocket, “you light it and it goes and there’s not a lot of options,” she said.

Isaacman, who flew to orbit in a SpaceX Dragon capsule as a commercial astronaut, in September 2021, said the difference in spaceflight, for him, wasn’t any surprise.

“What was unexpected is you instantly feel different,” he said.

The image of looking back at the Earth from orbit was “a really powerful moment,” he said.

Haise recalled it took him about 10 hours to adjust to the zero-gravity environment in space during his Apollo 13 mission, partly because he made the mistake of moving around too quickly.

“I was hurrying because I wanted to catch that wonderful view of the Earth going by,” he said.

Despite the initial seasickness, “zero-G is euphoric,” he said.

But it was his time as a NASA research pilot, part of that time at what is now Armstrong Flight Research Center at Edwards Air Force Base, that Haise fondly recalled.

“It was the best flying time I had in my career,” he said.

Mallick, whose time in the NASA pilot ranks at Edwards coincided with Haise’s, said he transferred there from NASA’s facility in Virginia.

“I knew they were doing so many big things,” he said. His own career included flying the Lunar Landing Research Vehicle, which created a trainer that helped the Apollo astronauts manually land on the moon, and the XB-70 supersonic bomber.

“It was interesting to me that aeronautics and space were together all the way, shoulder to shoulder,” he said.

Ericsson, who is planning another SpaceX commercial mission, said so much of what they do is based on the work and the lessons learned by earlier spaceflight efforts.

“We are standing on the shoulders of giants, some of whom sit with us up here tonight,” he said.

I know Donald mallick...His son (Davy) worked for me. He signed a copy of his book for me...""The Smell of Kerosene: A Fighter Pilot's Odyssey"" It is a Great Read.